But like all dyed-in-the-wool retailers, he is prepared to put himself out there when there is a product to sell.

The former Tesco boss has spent the past decade carving out a career in private equity and venture capital, looking for the next big investment opportunity.

And at the age of 63, it is clear that Leahy’s enthusiasm for business is undimmed.

Upbeat: Former Tesco boss Sir Terry Leahy has spent the past decade carving out a career in private equity and venture capital, looking for the next big investment opportunity

He said: ‘I am full time but it’s not as intense as running Tesco – that’s an all-in job.

‘It’s more like being a grandparent than a parent. But I like business. It’s a great game and it keeps you fully engaged.

‘It’s how do you acquire customers. How do you engage them and how to you serve them. How do you compete with others who are trying to take your customers away. It’s fascinating.’

Leahy’s competitors in this case are big tobacco companies, and more specifically their vaping divisions.

I meet Sir Terry in the plush offices of private equity firm Clayton, Dubilier & Rice, tucked away near London’s Mayfair – a stone’s throw from the Queen’s corner shop Fortnum & Mason and a far cry from Tesco’s HQ in Welwyn Garden City in Hertfordshire.

Sir Terry, a non-smoker who is in good shape, is brandishing what looks like two packets of cigarettes.

In fact they are new cigarette-shaped inhalers which give smokers an instant hit of nicotine – but without billowing clouds of coloured vapour.

Officially launched in November, the product called Voke claims to be more effective than a nicotine patch, without the health concerns attached to e-cigarettes, which are now plaguing big tobacco companies.

It is also designed to ‘mimic the smoking rituals’, which many smokers find almost as difficult to give up as the nicotine itself.

The cigarette-shaped device, which produces no heat, no burn and does not need batteries, is attached to a charger.

Sir Terry says the launch is ‘well-timed’ amid health concerns over vaping.

Admittedly, the market is huge with more than 7m smokers and more than 3m vapers in the UK.

A life-long Everton football club fan, Leahy is less clear about his political allegiances than he is about his sporting and business loyalties – although he openly admits he voted to remain in the EU.

He strikes a more upbeat tone than some of his fellow Remainers, arguing ‘the success of our society is in our hands’.

As a pragmatist, he believes the Tory majority means Boris Johnson can deliver Brexit and businesses can finally plan for life outside the EU. 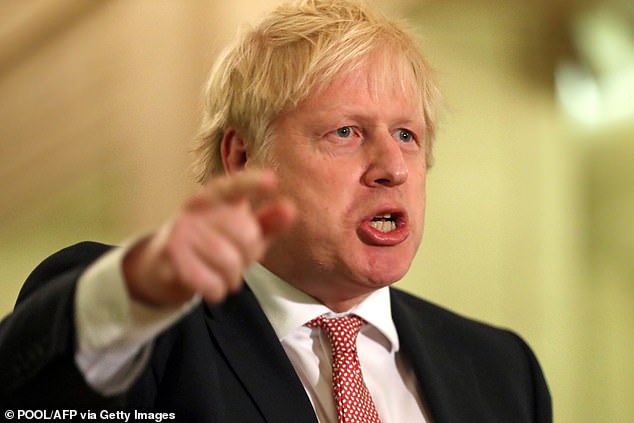 The ‘clear parliamentary majority’, he says, ‘will be seen favourably by business’ as it helps the investment climate and allows a ‘direction of travel to be set for the economy’.

‘That’s good for business because then business can plan their investments with a clearer understanding, for better or worse, what direction the country is going in.

‘So, I think you may see an unlocking of some investments that have been delayed during the inevitable period of uncertainty over the last couple of years.’

He adds: ‘I think that three-and-a-half years on, the important thing is to accept where we are and make the best of it.

‘Because whether you’re in Europe or out or whatever is the relationship you have with Europe, the success of our society is in our hands.’

Among them were billionaire Phones4U founder John Caudwell, who donated £500,000 to the Tory party just days after meeting shadow chancellor John McDonnell for a cup of tea.

Caudwell said almost every wealthy person he knew – including himself – was thinking of fleeing the country if Labour won power.

He also said the party’s anti-business messages and policies – including nationalisation of large swathes of industry and the confiscation of shares –’frighten me to death for the future of Britain’.

In contrast, Leahy is not exactly a headline-writer’s dream and is more prone to measured understatement than colourful language.

But it is clear that he believes Johnson’s tub thumping, pro-business rhetoric alone – in contrast to Labour’s big business bashing – is a good start.

‘I mean, I think to some extent the mood music at the moment is the most important thing,’ he says. ‘So it’s trying to create a sense of direction.

‘Trying to show a confidence. And trying to show an encouragement to entrepreneurship and risk taking. That’s almost as important as specific policies.’

It is almost a decade since he quit as chief executive of Tesco after 14 years at the helm, ending a 32-year career at the grocer which started when he joined as a trainee marketing executive.

During his tenure, he turned Tesco into Britain’s biggest retailer and a global powerhouse. When he retired at 55 he said his work was ‘almost complete’.

But his legacy quickly came under fire, as his departure was followed by a string of profit warnings and a £1.5billion hit from its disastrous Fresh & Easy venture in the US.

Sir Terry’s predecessor and mentor Lord Maclaurin memorably claimed he had ‘lost the plot’ by trying to plant Tesco’s flag around the world.

Since then, Tesco has scaled back its global ambitions, pulling the plug on its Korean business and it is now weighing up the sale of its Thai and Malaysian stores. Sir Terry says he has no regrets.

‘Sales increased fivefold, profits fivefold, share price fivefold,’ he adds. ‘So, you can’t really expect for more than that, and business is about risk.

‘So all of the success you have, all the failures that you have, are part and parcel of the same thing, you can’t have success without failure.’

Asked what he was proudest of, he says: ‘I suppose if you have to pick one thing, Clubcard.

That really changed the standing of Tesco and what it was able to do, and it was Clubcard really that allowed Tesco to reach the top of the market. In some ways it was the birth of big data.’

Leahy’s last big job in retail was as chairman of the High Street discount chain B&M, which he quit two years ago.

Unlike many City heavyweights who become serial chairman long into their 60s and 70s, he says he no longer harbours ambitions for another big job with a FTSE company.

He says: ‘I don’t think so. I’ve got everything I possibly want. I’m invested in more than 20 venture businesses.

So, I’m very fortunate in seeing probably more sides of business now than ever before.’

As a man who famously grew up on a council estate in Liverpool to become one of Britain’s most successful retailers, many would argue that Leahy has nothing left to prove.