With keyless car theft on the rise, Halfords has today launched a new product that it hopes can tackle the spate of high-tech vehicle crime Britain.

By placing a digit over a sensor on the device, it unlocks in moments, meaning there will no longer be any keys for owners to lose or locks that thieves can pick.

The new advanced steering lock uses a sequence of actions provided in its instructions to store a user’s fingerprint.

It can hold up to 20 different prints at any one time, so family and friends can also access it, while they can also be deleted and replaced at any time.

The print-recognising sensor is electronic, meaning the lock has to be charged via a USB port when the battery level drops.

The internal covering of the head of the lock has a foam lining, preventing scratching to the material of the steering wheel and it fits all types of wheel, including those with airbags.

Halfords said the device is compact enough to store easily inside the vehicle, such as in a glovebox, under a seat or in a door pocket.

Pavan Sondhi, Halfords’ car crime expert, said: ‘While the humble steering lock remains an extremely effective and visual deterrent to car thieves, we couldn’t help but give the thumbs up to upgrading this classic security device.

‘By adding biometric technology to this old-school solution we are creating another barrier against the latest relay theft techniques and making it harder for thieves to get through that last line of defence.’ 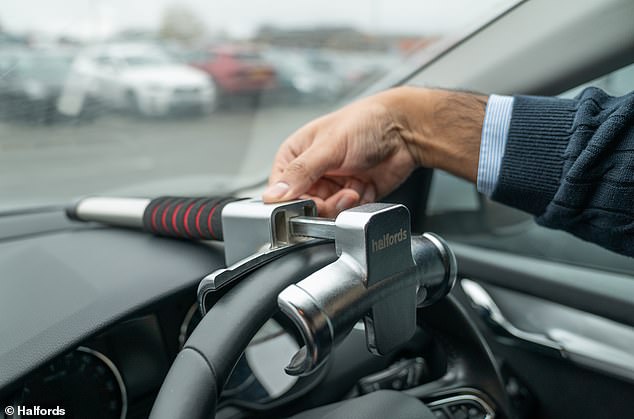 By placing a digit over a sensor on the device, it unlocks in moments 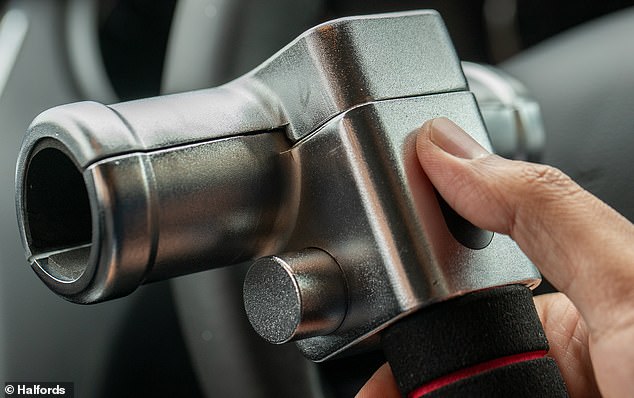 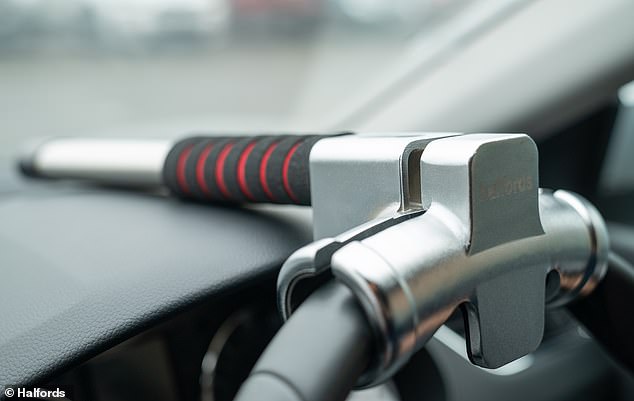 It can hold up to 20 different prints at any one time, so family and friends can also access it, while they can also be deleted and replaced at any time

The motoring retailer has launched the product after surveying 2,000 motorists and finding that almost one in five had never used any sort of security devices on their cars, despite the significant rise in keyless car crime.

In fact, of the driver it polled, almost a third said they have been the victim of a car crime in recent years.

This is because many of the UK’s newest and most popular cars are at risk of being stolen in seconds due to their keyless entry systems. 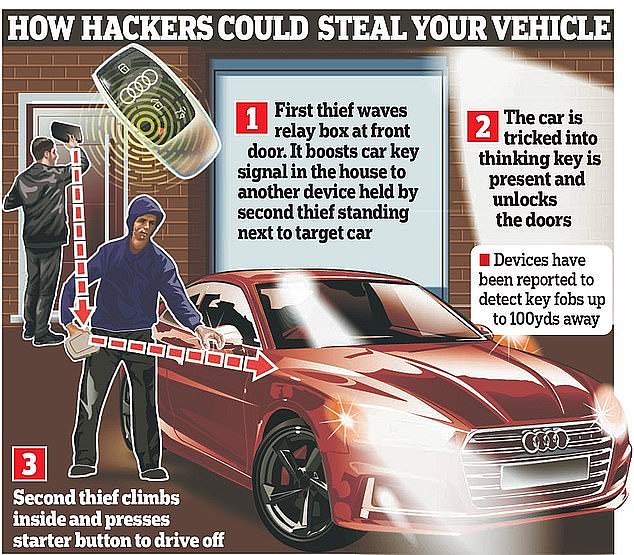 Keyless technology was originally designed by manufacturers for an owner’s convenience, as it lets the driver open and start their car without taking the key out of their pocket.

However, organised criminals have been mastering the art of ‘relay’ thefts to infiltrate them.

Technology bought cheap online allows organised gangs to duplicate the sensor in a keyless fob – even when they are metres away, such as in the safety of the owner’s home – to gain access to the vehicle and drive it away undetected.

This type of theft has reached epidemic levels, with car crimes rates in England and Wales ballooning by 50 per cent in the last five years, says the Office for National Statistics.

This is Money revealed last year that gangs are sharing information about shopping lists of pricey premium models to target that they can steal using keyless relay tactics.

Vehicle protection and management technology provider, AX, claims that thieves aren’t just focusing on expensive models; they are also stealing some of Britain’s most in-demand cars and selling them on the black market for between £1,000 and £3,000. 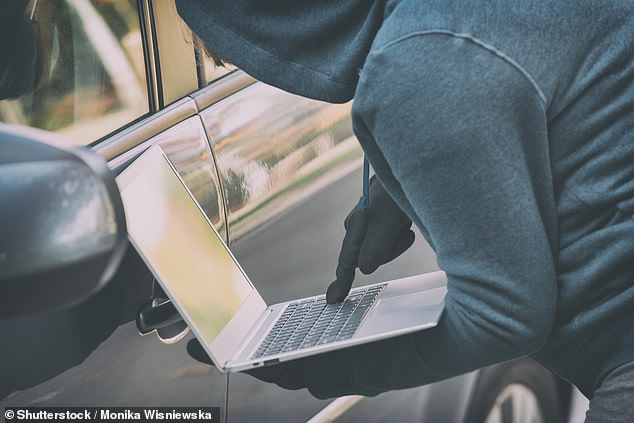 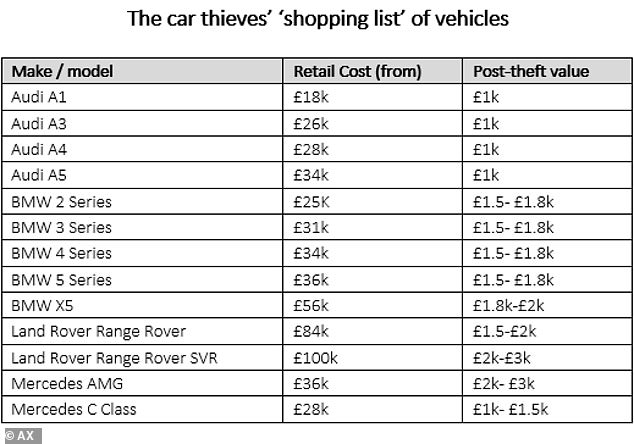 It has resulted in one vehicle being stolen every five minutes, according to latest figures.

Data from police forces around the UK revealed there has been a 45 per cent rise in reported thefts since 2014, before which there had been a six-year decline in motor crime.

The Association of British Insurers has also confirmed that motor policy providers had paid out their highest volume of claims against car thefts last year than they had done since 2012.

The rise has seen the demand for steering locks – security systems that many people thought went out of circulation years ago – has doubled in the last 12 months.

Halfords said the increasing popularity of the devices showcased the true scale of the keyless theft issue in the UK. 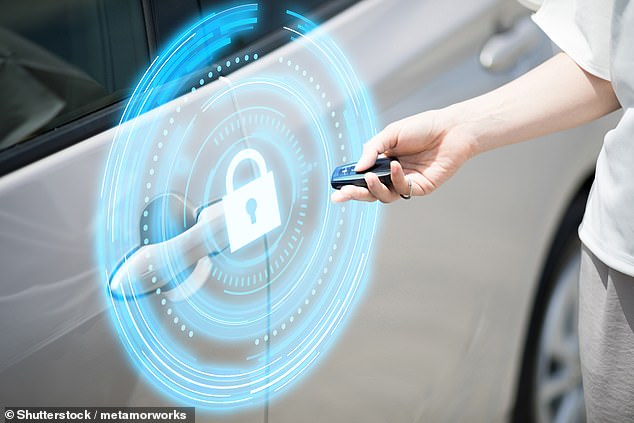 Car makers are trying to tackle keyless car crime themselves…

Car makers are also fighting back against the epidemic of keyless car crime.

Six of the latest models from major manufacturers including Audi, BMW, Ford and VW received the highest security rating available in a new round of assessments that scrutinises how well vehicles stand-up against relay thefts.

It found that many of the latest cars with keyless entry and keyless start systems now have motion sensors built into the fobs to block organised gangs who use cheap hacking devices bought off the internet to steal motors.

These motion sensors inside the keyfobs detect when it has been stationary for a period after being put down by the rightful car owner.

When a certain amount of time has lapsed, the system them triggers an automatic sleep mode.

This means the fob will no longer respond to thieves attempting to relay its signal.

Full functionality is only restored when the key is moved again by the owner. 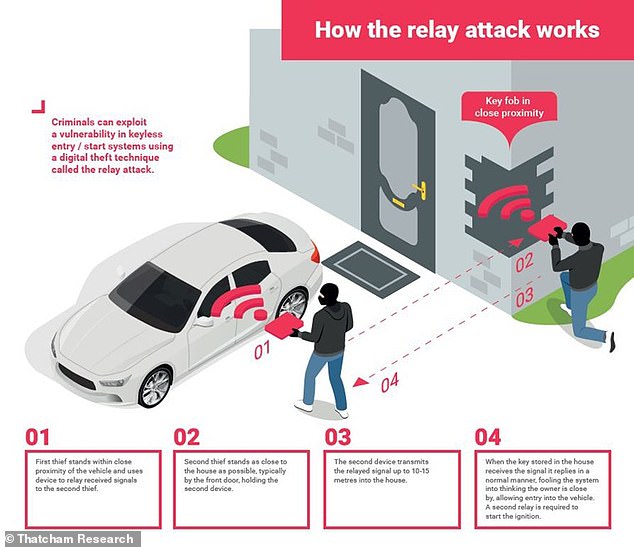