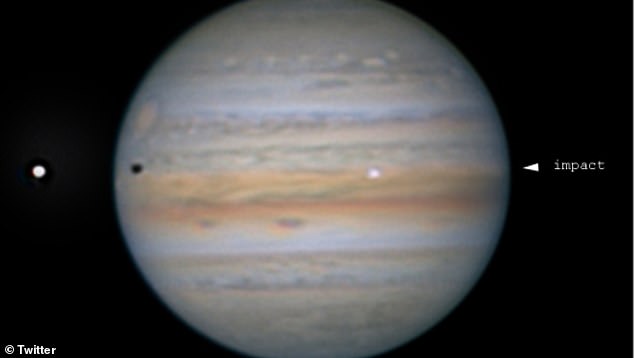 A mysterious object slammed into Jupiter this week, causing a bright flash of light that was captured by amateur astronomers 382.76 million miles away on Earth. German astronomer Harald Paleske was watching the shadow of Jupiter’s moon, Io, create a solar eclipse in the planet’s atmosphere of Jupiter when he spotted the probable impact. ‘A bright … Read more

This is the moment a stunned family spotted five mysterious UFOs flying above the south London skyline.  Mark Banks, 38, was at his girlfriend Vicky Andrews’s home near the A2 in Welling with his daughter Aimee, 13, when Vicky spotted the donut-shaped objects out of the window.   They filmed the five objects, which were round … Read more

Bizarre, three-foot-wide blobs of jelly have been spotted off the Norwegian coast — and they contain tiny squid eggs in a bubble of mucus, a study has found. Researchers found that each of the blobs may contain as many as hundreds of thousands of the tiny eggs, each of which can develop into an embryonic … Read more

Mysterious rumblings known as ‘Marsquakes’ have been detected by Nasa’s InSight lander, offering further clues about volcanic activity beneath the surface of the Red Planet. The tremors originated in a region called Cerberus Fossae – an area where Nasa scientists have picked up significant seismical activity and even landslides in the past.    They believe the tremors were … Read more

A Loch Ness Monster hunter believes she has caught the beast on camera after a live webcam stream of the loch captured a mysterious black shape moving across the water.  Kalynn Wangle, 28, from Oregon, recorded the shape moving slowly on the surface of the water whilst watching the livestream of the freshwater Loch in the … Read more

Blobs of rock lurking deep inside the planet could be the last remaining pieces of Theia, an early world that collided with Earth billions of years ago, a new study claims. The moon is thought to have formed from a ‘giant impact’ early in the evolution of the solar system when a Mars-sized planet called Theia collided … Read more

Sylvia is rather concerned about a suspicious character she has seen lurking in our neighbourhood. ‘He is wearing a high-vis jacket and carrying one of those litter pickers,’ she reports. ‘I approached him and he told me to mind my own business. Something’s just not right.’ Unless there’s a new type of conscientious criminal who … Read more