There’s only one downside to visiting St Petersburg. You quickly realise you’ll have to return again and again if you want to see everything.

I’ve visited the Russian city six times over the past 30 years and still feel I’ve only scraped the surface.

The Winter Palace is second only to Versailles in architecture and the Amber Room should be on everyone’s list of ‘places to see before I die’. However, since my latest book, Heads You Win, which was inspired in part by St Petersburg, has been banned in Russia, I fear I may never be able to visit this great city again.

Magnificent: The Grand Palace at Peterhof is ‘second only to Versailles in architecture’ according to Jeffrey

I first visited St Petersburg three decades ago on a research trip. Once I discovered the Hermitage Museum I was hooked, and I’ve never really recovered, as it’s possibly the greatest gallery on Earth.

It’s a port city, though you’re more aware of the beautiful Neva River that sweeps through the centre and its amazing bridges than any docks. I always say to people, don’t go to your grave without visiting St Petersburg.

It is quite simply a feast for the eyes and the mind, the sort of place where every minute can be taken up seeing or doing something. It’s very different from other parts of Russia; a beautiful ancient city with a friendly, cosmopolitan outlook and a middle-class feel. 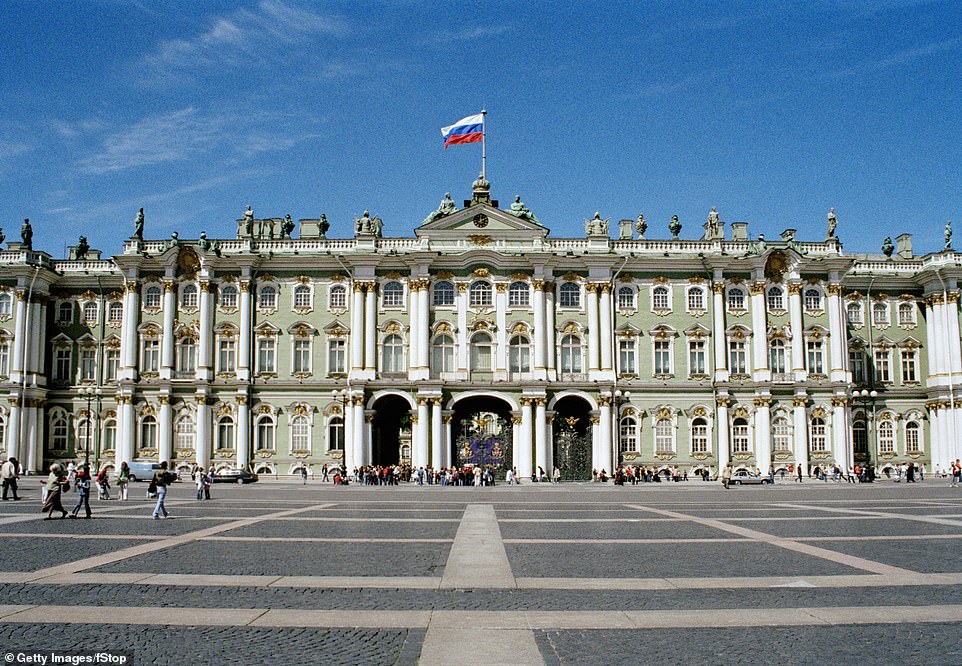 ‘The Hermitage (above) is arguably the greatest museum in the world. The Metropolitan Museum of Art in New York might disagree, but, once you’ve visited the Hermitage, you’ll see why I think so,’ says Jeffrey

In the years I’ve been visiting, Russia’s become more westernised and certainly more hospitable to tourists. You won’t be followed by the KGB these days — well, not all of you.

Hotel Astoria in the centre of the city is a wonderful home from home and a delightful place to stay. It has a deeply Russian feel to it but, like all the best international hotels, feels familiar and welcoming. Previous guests have included Lenin, H. G. Wells and Rasputin, so you’re in good company.

Opposite is St Isaac’s Cathedral, another museum with the most incredible interior that really has to be seen to be believed. It’s a short walk from Palace Square and the Hermitage, so very central for exploring.

The Hermitage is arguably the greatest museum in the world. The Metropolitan Museum of Art in New York might disagree, but, once you’ve visited the Hermitage, you’ll see why I think so.

I don’t know how long other people can last, but I can only do about two-and-a-half hours in a gallery before I lose my focus and need to be fed. I’ve done that around a dozen times at the Hermitage and I’m still only half-way through.

Groups are allowed in an hour before it opens, so it’s worth checking to see if there’s a tour you can join to give yourself a head start. Otherwise, go early and make sure you’re first in the queue when the doors open. Wear comfy shoes and take a bottle of water: you’ll need it.

My wife Mary and I have been to the Hermitage together several times. During our last visit, we employed a teacher from St Petersburg as a tour guide while we travelled around for a week. She was worth every penny and was not expensive.

She answered all our questions and quite literally didn’t stop talking. We thought she was brilliant because she gave us fact after fact after fact — some of which I even remember. 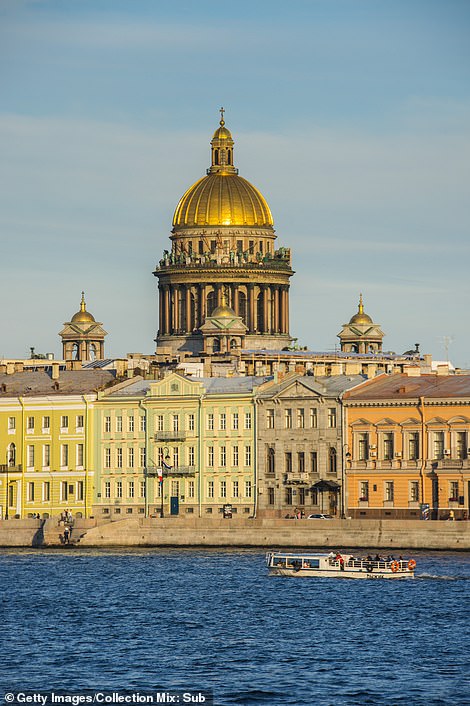 Beloved city: The views of St Isaac’s Cathedral from the Neva River

If you haven’t got a guide, do ask locals if you’re lost or looking for something — they’re friendly and many speak English. If not, Google Translate will probably help interpret for you.

What struck me even after all these years of travelling in the country is what a very middle-class people the Russians are — they know their history, they know their country, and they’re extremely proud of both. On one of our visits, I had the honour of being shown around the museum by the director — a rare privilege.

Make sure you don’t miss the Michelangelo statue Crouching Boy. He’s bending down and pulling a thorn out of his foot. It’s not as well-known as David, but it’s so real that you can feel his pain.

Mary’s favourites are the Dutch rooms, featuring huge collections by the likes of Rembrandt and van Dyck.

What we couldn’t work out, and the director was silent on the issue, was how much of the contents are stolen. The Russians looted museums and galleries across Europe at the end of World War II.

I sometimes look at a picture and wonder whether it should be in Germany or Poland or the former Czechoslovakia. But, unsurprisingly, when you raise the subject, people don’t (or won’t) say anything.

Outside the Hermitage in Palace Square — where key events of the October Revolution of 1917 took place — the first thing that hits you is the colour. The buildings are resplendent in a mix of gold, red and green.

At night, it’s wonderfully lit. The locals complained about the cost — until they saw the effect it had on tourism.

Crossing the Neva River is the Palace Bridge. Many married couples go there to have their photograph taken. It’s quite charming watching them queuing up to be snapped: it’s almost compulsory.

We’re usually in St Petersburg in July (I still take a couple of sweaters, though it’s generally warm), however I’m told by aficionados that you should go in January, because you really will have the palaces and museums to yourself.

In case you didn’t know…

If that’s the case, you’ll need layers of extra clothing, though, even then, it’s not really cold by Russian standards — only minus 10c or thereabouts. A bit like Cambridge.

I did buy a Russian hat, known as an ushanka, which also feels at home in Cambridgeshire. It’s beautifully warm, covers your ears and goes under your chin.

Peter the Great wanted the Peterhof Palace — actually a series of palaces, including the Grand Palace, and now a Unesco World Heritage Site — to be a mini Versailles, and he certainly succeeded.

They’ve spent millions of roubles repainting the main buildings in green and red with gold leaf — it looks magnificent. 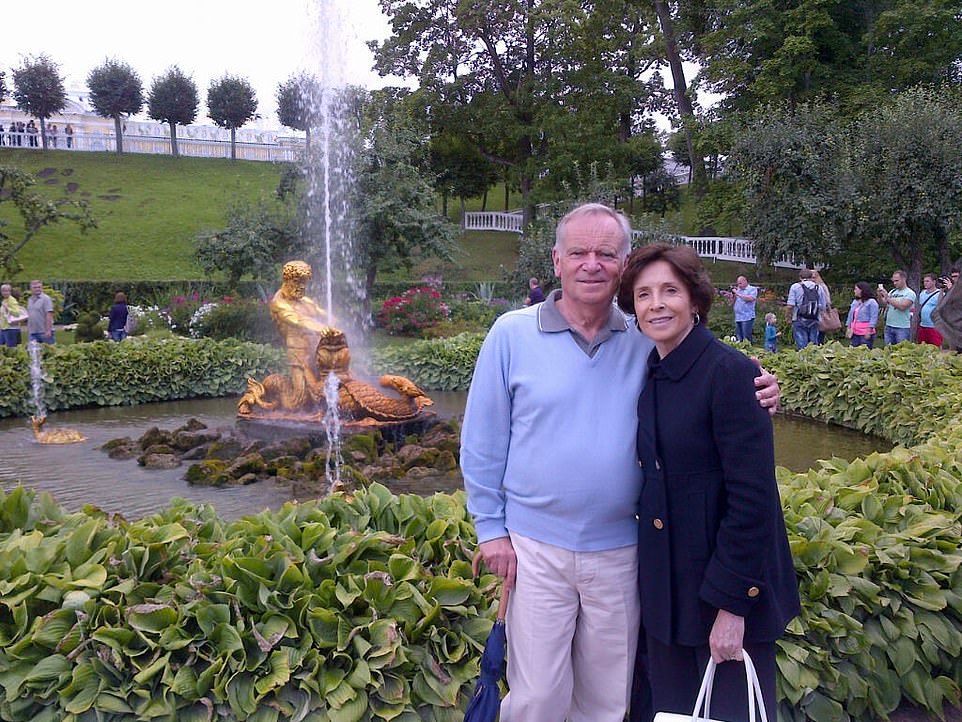 Jeffrey and his wife Mary, pictured above. Jeffrey has visited the Russian city six times over the past 30 years

And that’s before you even get inside. You can walk around the grounds for several hours just admiring the fountains.

Another absolute must-see is the Amber Room. You’d be very foolish to go to St Petersburg and not visit it. Quite simply, it’s unique.

It’s located in the Catherine Palace — once the summer residence of the Tsars — about 20 miles (a short car or bus journey) south of St Petersburg in the town of Pushkin.

It’s a huge, square room decorated in amber panels backed with gold leaf and mirrors: simply breathtaking. You can see why the original was considered the ‘eighth wonder of the world’.

Like everywhere else, it’s incredibly crowded, but visit the palace, be patient and you’ll reach the room eventually.

Outside the Catherine Palace are some of the finest gift shops I’ve ever been to. They do sell touristy things, but you’ll also find genuinely good craftsmanship at reasonable prices. Over the years, we have purchased several amber mementoes.

Ironically, given my love for St Petersburg, my book Heads You Win — which opens with a KGB assassination — is not being published in Russia.

Its hero, Alexander Karpenko, born on the fifth floor of one of the brutal Communist-era tenements that still circle the city, is forced to flee after his father is killed for defying the state.

Even though it has already being published in 11 languages in 15 countries, Russia has passed on this one, despite publishing many of my other books. 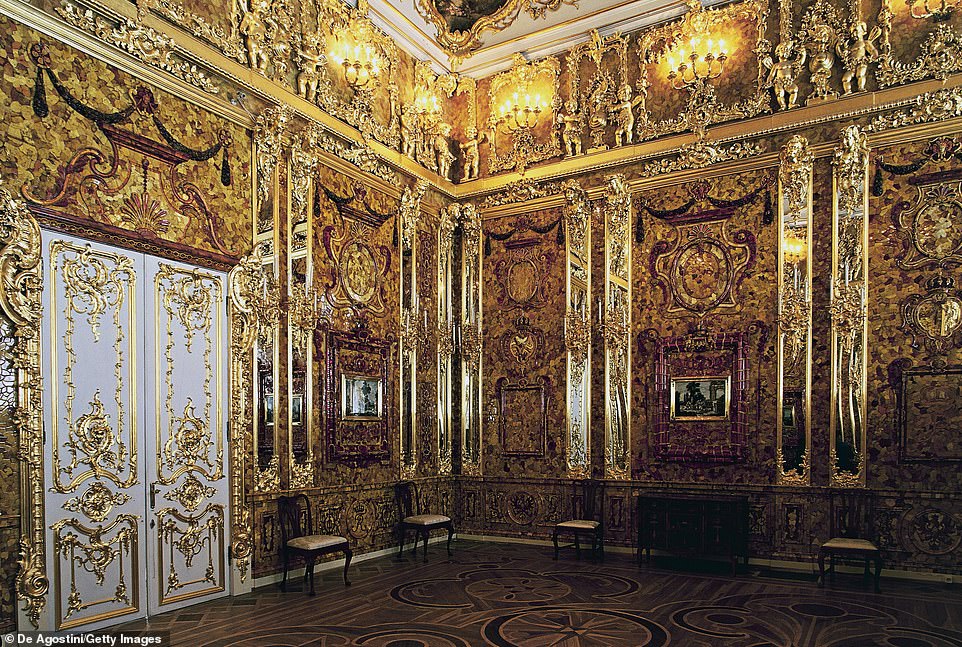 Must-see: The Amber Room in Catherine Palace is decorated in amber panels backed with gold leaf and mirrors

We tried 11 publishers, but none would consider it, which is a source of great sadness.

That said, I’m in good company. The highly respected British historian Antony Beevor has seen his books barred in parts of the country after writing brilliantly about World War II atrocities committed by Russian soldiers.

I suspect the reason for my de facto ban is my portrayal of the repressive Moscow regime and its efforts to hinder Karpenko, plus my final sentence, which would not go down well in the Kremlin.

Russians do seem to like strong leadership. The truth is, they’ve got a modern Tsar in charge at the moment and, although he is ruthless, that clearly suits many of them. Despite this, I hope I will one day return to St Petersburg. I often think if I could only visit one city again in my life, it would have to be there.