Florence Nightingale, born 200 years ago this month, was the original nursing heroine who dedicated her life to healthcare reform, and over two weeks we’re telling her extraordinary story through fascinating objects.

Andrew Preston tells the story of Florence Nightingale in a tribute to mark the 200th anniversary since her birth. Pictured: Florence (Laura Morgan) meets the Queen (Jenna Coleman) in ITV’s Victoria 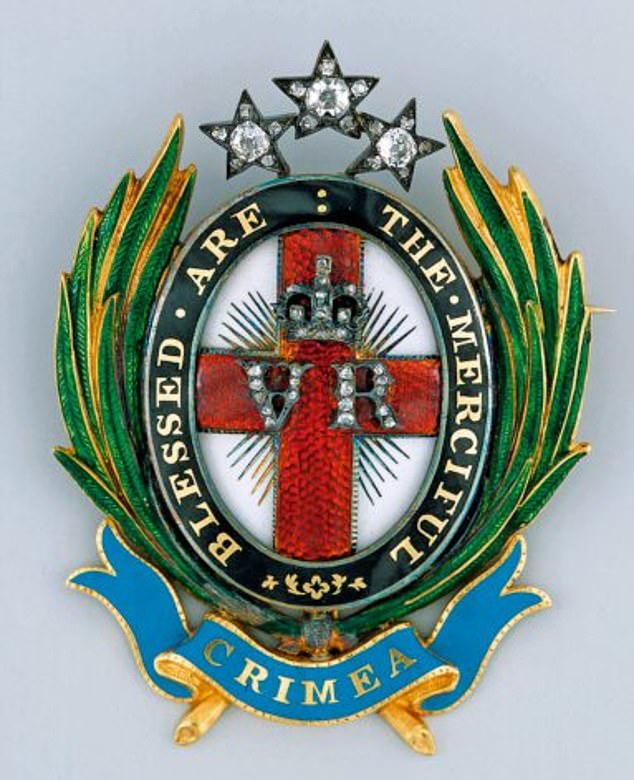 Victoria’s mark of royal esteem: The ITV series Victoria depicts a fictional meeting between Florence and the Queen during the cholera outbreak in 1854, and Victoria certainly did appreciate her later work during the Crimean War. She sent this gold brooch with diamonds, the ‘Nightingale Jewel’, as a mark of royal appreciation. The dedication on the back reads, ‘To Miss Florence Nightingale, as a mark of esteem and gratitude for her devotion towards the Queen’s brave soldiers, from Victoria R. 1855.’ Florence then enlisted her support for a Royal Commission into what had gone wrong in the hospitals in the war. She was less excited when invited to a ball at Balmoral, calling it a ‘dull affair’. 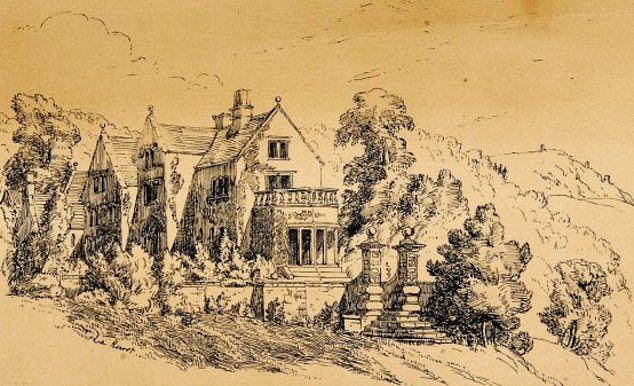 To the manor born – the nightingale family home: Florence’s sister Parthenope drew this picture of Lea Hurst, the Nightingale family’s manor house in Derbyshire where they spent the summer months every year. The family money came from lead mining in Derbyshire. Florence was particularly keen on Lea Hurst and took an active role in the lives of the people in the local community. The writer Elizabeth Gaskell also stayed here, enjoying the view across the Derwent Valley as she worked on her novel North And South. You can now stay at Lea Hurst as a bed and breakfast guest. The family found the winters in Derbyshire too cold, so Florence’s father bought Embley Park on the edge of the New Forest in Hampshire in 1825 as their second home. Parthenope drew another picture of that house, which was grander, and pleased Florence’s socially ambitious mother Fanny. It was there, either inside the house or under a large cedar tree in the garden according to different versions of the story, that at the age of 17 Florence claimed to have received her calling from God. She didn’t know then how to follow her calling, but gradually found it was to be in the field of nursing care. Embley is an independent day and boarding school now. 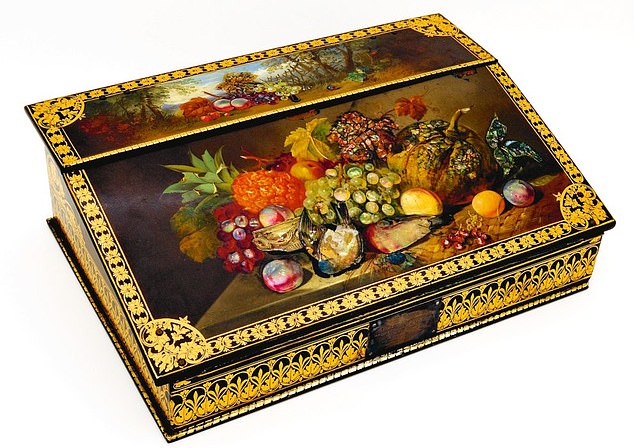 A gift from grateful locals: This writing desk was a gift from the villagers near Florence’s family home in Derbyshire to celebrate her safe return from the Crimean War. She took a keen interest in the local people, providing food for them, writing letters to doctors on their behalf and even paying for treatment. Although bedridden for most of the rest of her life, she worked tirelessly and managed to produce a series of reports, as well as 200 books, pamphlets and articles, her handbook on nursing and more than 14,000 letters. She would write sitting up in bed, surrounded by her beloved cats, who would sometimes leave paw prints on her papers. 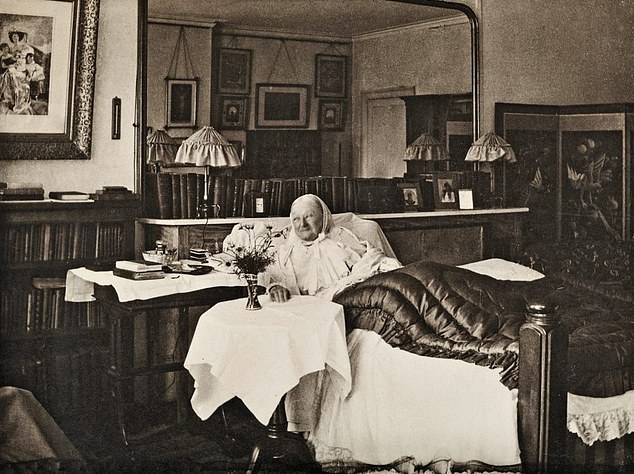 Bedbound at home in Mayfair: This is Florence in her home at 10 South Street in Mayfair. After her near-fatal attack of Crimean fever (probably chronic brucellosis caused by bacteria from infected goat’s milk in Scutari) she had bouts of fever, exhaustion, depression, insomnia and severe back pain. She spent a lot of her time in bed, with visitors including Charles Dickens and the Aga Khan. The house was destroyed in 1929, and a blue plaque is now attached to the block of flats built in its place. Florence died in her sleep there in August 1910, aged 90. She’d declined to be buried in Westminster Abbey, insisting on a private funeral and a simple grave in the family plot at St Margaret’s Church in East Wellow, near Embley. She also asked for a plain wooden casket, with the money saved going to charity. The churchyard was crowded with local people who came to pay their respects, and her coffin was carried to the graveside by soldiers. A memorial service was held in St Paul’s Cathedral, attended by 1,000 nurses and Crimean War veterans. The inscription on her headstone reads simply, ‘F.N. Born 12 May 1820. Died 13 August 1910.’ 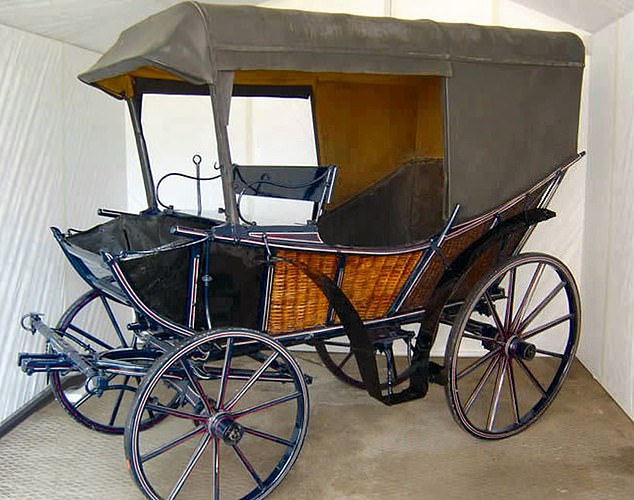 Doing the rounds in Florrie’s lorry: Florence inspected the military hospitals in the Crimea in a mule cart, until it toppled over in an accident. The Land Transport Corps then gave her a black Russian carriage (pictured). Named ‘Florrie’s Lorry’, it was solidly built with a waterproof hood and curtains. The carriage was shipped to England after the war and given to the Nightingale Training School at St Thomas’ Hospital in London. It was damaged during the Blitz, but was restored and exhibited at Claydon House in Buckinghamshire, home to Florence’s sister Parthenope and brother-in-law Sir Harry Verney. 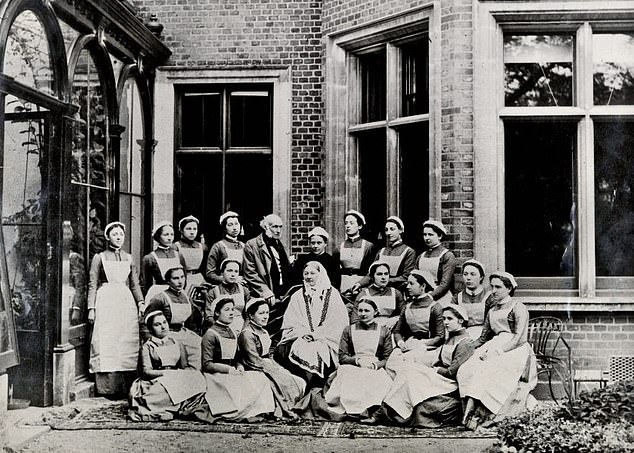 Honoured with a school: During the Crimean War, a public fund was set up in honour of Florence, to be spent on training nurses. More than £44,000 was raised (the equivalent of £4.7 million today). The money was used to set up The Nightingale School, which opened in July 1860 at St Thomas’ Hospital in London – the redesign of which she greatly influenced – and also a midwifery school at King’s College Hospital in London. By that stage Florence (pictured centre, with trainees) was preoccupied with the reform of army medicine and her work for the poor in India, and things drifted at the school where there was a high drop-out rate. She became directly involved again in the 1870s, meeting regularly with the students and the sisters, and the quality of instruction improved. Her hope was that with proper training nursing might provide a suitable occupation for respectable middle-class women. 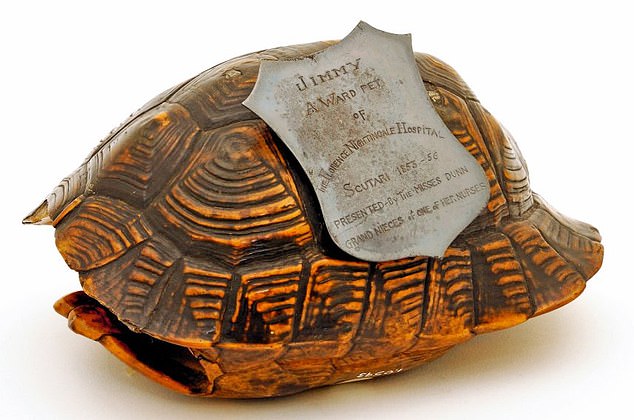 How jimmy the tortoise helped: Florence loved animals and believed they could be of therapeutic benefit to patients. In her 1860 international bestseller Notes On Nursing she wrote that ‘a small pet is often an excellent companion for the sick’. So some of the soldiers at Scutari Hospital were allowed to keep pets – Jimmy the tortoise was one of them and he had the run of the wards. The metal plaque on his shell (pictured) reads, ‘Jimmy, a ward pet of The Florence Nightingale Hospital, Scutari 1853-56, presented by the Misses Dunn, grand nieces of one of her nurses’. Therapy animals are still used in hospitals today. Florence is said to have first shown her nursing skills as a child by tending to a shepherd’s collie after boys had thrown stones at it. She went on to have many pets including a pony, chameleons, an owl and a parrot. She returned from the Crimea with a puppy, presented to her by soldiers. 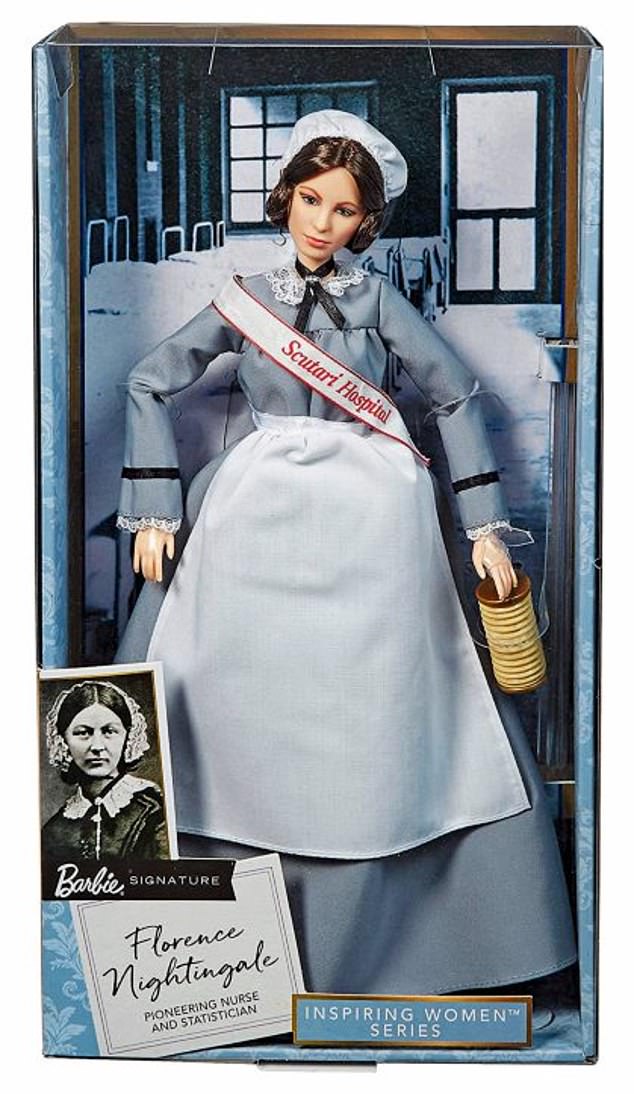 A Barbie Doll tribute: The Barbie doll of Florence (pictured) was released this year as part of the brand’s Inspiring Women series. She wears a nurse’s uniform featuring a grey dress with a lace collar and sleeve trim, as well as a nurse’s cap, apron and a Scutari Hospital sash, and carries the correct lantern. The series pays tribute to ‘courageous women who took risks, changed rules, and paved the way for generations of girls to dream bigger than ever before’. Other women in the series include artist Frida Kahlo and aviation pioneer Amelia Earhart.

In need: Many of Florence’s treasures are at the Florence Nightingale Museum in Central London, which has struggled due to the coronavirus lockdown. To help, visit gofundme.com/f/6ws3a-save-the-florence-nightingale-museum