S.B. writes: My account with Scottish Power has been under review by the energy supplier for more than 18 months, as it insists we owe more than £7,000. The company claims we have not made a payment since 2013, but I have spoken to people at Scottish Power who stress that a domestic account would not be allowed to get into this state.

I have supplied meter readings but still get an estimated bill. I have set up direct debits for agreed amounts, but then it takes different amounts, once collecting three payments within seven days.

I cancelled the direct debit, so Scottish Power then took £700 from my wife’s account instead. It has now put a default notice on my credit file, which is causing untold stress. We want to stop living in fear of Scottish Power.

I am quite used to receiving complaints about utility companies, but something has clearly gone badly wrong at Spanish-owned Scottish Power, judging by the sharp rise in the number of letters and emails I have received from readers.

And what jumped off the page when I read your complaint was the company’s claim that you have not made a payment since 2013. Several weeks ago we published a letter from a charity that was being threatened with closure because of Scottish Power’s demands, and those demands were also rooted in the allegation that the charity had paid nothing since 2013 and now owes almost £25,000.

The explanation was – and is – bizarre. In 2013, Scottish Power updated its computerised billing system, but the update was flawed. Customers who were affected by this received normal bills, and made normal payments. But the computer recorded that Scottish Power owed them money instead of the other way around.

This showed up in records as a credit balance, so Scottish Power reduced the amount it collected, and every month the same thing happened: the more energy you used, the bigger the accidental credit balance grew, and the less the company collected. Now the computer glitch has been spotted, and although there is a limit to how far back it can go, Scottish Power wants its money.

But even now, it cannot get things right. It sent you a notice of overdue payment that complains: ‘You agreed to repay your outstanding balance of £0.00 by instalments. Because you have not kept to this agreement, it has been cancelled.’ How anyone can pay no pounds and no pence by instalments is a mystery.

I repeatedly invited Scottish Power boss Keith Anderson to comment. He stayed silent and said nothing. One of his staff also refused to comment, because early in March you had lodged a complaint with the Energy Ombudsman. 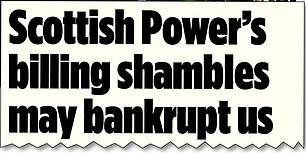 Headline news: Our story last month about how the charity was hit

The company would only comment after it had considered your complaint, filed their response, allowed a couple more months for the Ombudsman to investigate and then to offer an outcome. Meanwhile, the fear continues.

And Scottish Power has been just as bad at handling the situation with the charity I wrote about. On March 18, the company told me it would contact the charity on March 20 to discuss the problem, but March 20 came and went without any such contact.

Yet Scottish Power has increased the charity’s monthly bill from £1,490 to £1,596, increasing the risk it could go bust. Truly, something is very, very wrong with this company, and just as truly, I am sure I shall be writing about it again soon.

D.H. writes: I cannot believe I am having to ask for help for my 97- year-old father. He won £25 on his premium bonds and the cheque was paid into his HSBC account.

HSBC then said that National Savings & Investments had stopped the cheque.

However, NS&I told me that not only have they not stopped payment, but the cheque has been successfully cashed. 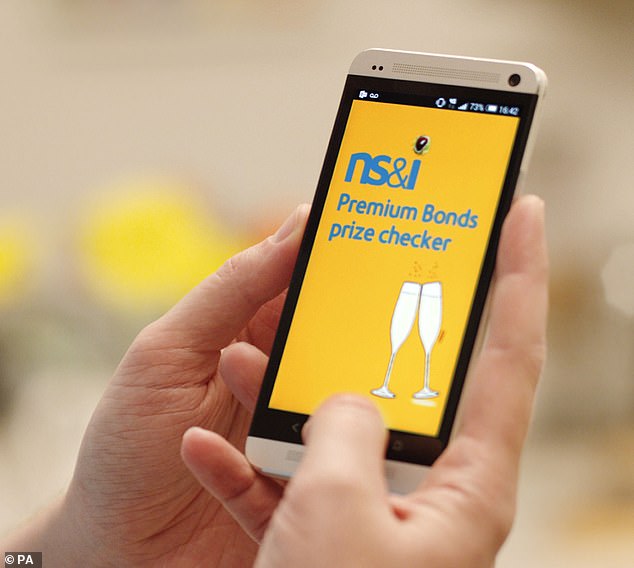 This has been a weird series of errors by HSBC. Your father actually won three £25 premium bond prizes and you deposited the cheques for him.

HSBC claimed one cheque had bounced, but NS&I was mystified, telling you: ‘Our records show that the £25 warrant was successfully cashed and has not been returned to NS&I.’

When you protested to the bank, HSBC insisted that NS&I stopped payment on one of the three cheques you deposited ‘in our Chesterfield branch’.

This was another layer of nonsense as you deposited the cheques in Stirling, hundreds of miles away. And the bank suggested the problem arose because two cheques carried the same serial number.

Wrong again – there were three different numbers. HSBC has offered no explanation.

It has apologised and told me: ‘We will learn lessons from this to ensure it does not happen again.’ They have credited your father’s account with £100.

Crime overall may be down due to coronavirus, but not frauds and scams, it seems.

Five weeks ago The Mail on Sunday warned that fraud victims who had lost money to scams involving diamonds and binary options were being contacted by Data Financial Services Limited.

This company claimed it could recover victims’ losses if they forked out a few thousand pounds to cover its costs.

But Data Financial Services itself is just another scam, impersonating a genuine company of that name. The Financial Conduct Authority published a ‘beware of the clone’ alert on its website, but the scam has continued unabated.

Two weeks ago I reported that the crooks were using a Lloyds Bank account to harvest their loot.

Today, I am sounding the alarm again. The fraudsters have turned to Nationwide Building Society, telling their victims to transfer money to sort code 070806, for the credit of account number 1045-2810.

A few days ago I warned Nationwide, which confirmed that funds had arrived. The building society’s Financial Crime team immediately blocked the account, and a spokesperson told me: ‘We are already speaking with the bank involved to return the money, and will look to close the account.’

Well done, Nationwide. The only thing that has not changed is the crooks’ telephone number, 0207 315 4076. The number really belongs to Dolphin Com Limited, based in Crewe in Cheshire.

It provides phone numbers to anyone who wants to pretend they are somewhere other than their true location.

Last week, I asked, will the fraudsters’ phone line be cut off soon? Will their bank details lead the authorities to identify and arrest the crooks? This week, the same questions remain unanswered

If you believe you are the victim of financial wrongdoing, write to Tony Hetherington at Financial Mail, 2 Derry Street, London W8 5TS or email [email protected] Because of the high volume of enquiries, personal replies cannot be given. Please send only copies of original documents, which we regret cannot be returned.