A dire couple of months for Tullow Oil has left the company’s shares on track for their worst year since they joined the stock market in 1988.

The oil exploration company slid another 10.2 per cent, or 6.9p, to 60.9p yesterday a week after the company ousted its chief executive, slashed its future production forecasts and cancelled its dividend.

Analysts at HSBC cut their recommendation on the FTSE 250 stock from hold to reduce, prompting last week’s 52 per cent slump to resume.

Investors had already been hit by a sell-off in November, after Tullow revealed problems with its Ghana drilling operations and the disappointing discovery of heavy crude oil, rather than the more desirable light crude, at its site in Guyana.

Oil woes: Analysts at HSBC cut their recommendation on the Tullow Oil stock from hold to reduce, prompting last week’s 52 per cent slump to resume

Shares are down a painful 65 per cent over the year to date – Tullow’s worst-ever annual performance.

Studio Retail Group, however, added to Mike Ashley’s stellar day. The value clothing and homeware company, previously called Findel, sold its educational resources arm for £50million to the Council of the City of Wakefield, which is the lead authority in the Yorkshire Purchasing Organisation.

The deal, which should help Studio to focus on its consumer business, caused shares to jump by 6.1 per cent, or 13.5p, to 233.5p. It boosted the value of Ashley’s 37 per cent stake, owned through Sports Direct, by more than £1million.

But there is trouble on the horizon for Playtech, the online gaming software company. 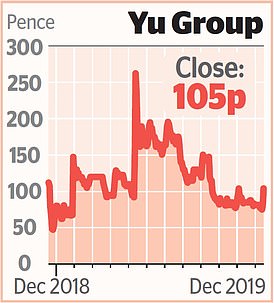 Energy supplier Yu Group soared after announcing a deal which should allow it to free up more cash.

The firm has previously had to keep cash aside to cover its hedging deals. These agreements involve Yu buying wholesale energy ahead of time to mitigate soaring energy prices in the future.

But it has agreed a £13m credit facility with Smartest Energy to cover hedging, so it won’t have to set aside the cash any more. Shares jumped 29.6pc, or 24p, to 105p.

Influential asset manager Royal London said the company’s latest pay proposals, which are due to be put to a vote this Thursday at the annual shareholder meeting, give investors a ‘raw deal’.

The bonus scheme Playtech (up 2.6 per cent, or 10.2p, to 396.3p) is suggesting it could hand its chief executive Mor Weizer more than £30million of shares, and has already been rejected by shareholder advisory groups ISS and Glass Lewis.

Royal London’s head of responsible investment, Ashley Hamilton Claxton, pointed out that the scheme offers Weizer rewards for meeting share price targets which are below the level at which Playtech’s shares traded in July last year, before a profit warning.

She added that Weizer will be able to claim his rights to each chunk of rewards after the shares have seen just one month of sustained performance.

‘We will therefore be voting against this plan at the company’s upcoming general meeting.’

A weekend meeting between the bosses of gold miner Centamin and its suitor Endeavour means the possibility of a deal between the two companies is now inching closer.

Centamin, which is focused mainly on Egypt, rejected a £1.47billion bid from Canadian rival Endeavour earlier this month, saying the deal did not offer enough value to shareholders.

But Centamin’s chairman and Endeavour’s chief executive met in the Australian city of Perth this weekend and agreed that they would both examine each other’s companies as part of a due diligence exercise.

Endeavour said this would be ‘a critical precursor’ to agreeing further terms of the deal.

Under takeover rules, Endeavour must state whether it will make a formal bid or not by December 31. It now wants Centamin to request an extension to the deadline, to give it more time. Centamin shares were flat at 119.7p.