More than 11million households in Britain risk overpaying £3.5billion on their energy bills this year as they stick to expensive standard variable tariffs from the Big Six, new research claims.

The energy giants are all set to price their SVR within an average of £1.33 of the new price cap level, which is due to come into effect on 1 April 2020, according to data from Uswitch, analysed by supplier, Bulb.

There is now only £4 difference between all of the Big Six standard variable tariffs, as they gravitate towards to the energy price cap.

The small margins means that 11million households will collectively overpay by £3.5billion this year, when compared to the cheapest average deals on the market – an extra £315 per household, per year.

The Big Six are all set to price their SVTs within an average of £1.33 of the new price cap level

The price cap was introduced at the beginning of 2019 as a way of encouraging customers stuck on pricey SVTs to shop around to find better deals – and not leave them paying over the odds on their monthly bills.

However, many suppliers have since been accused of using the price cap as a target, rather than an upper limit.

Hayden Wood co-founder and chief executive of Bulb, said: ‘The price cap was meant to be a maximum and not a target.

‘But the Big Six are refusing to help hard pressed families and are instead trying to exploit them.

‘Wholesale prices have been falling but the Big Six are still setting their prices as close to the price cap as possible.

‘That means that more than 11million households will take a £300 price hit this year unless they switch in April.

Could energy bills fall due to oil price crash?

An argument between Russia and Saudi Arabia has led to oil prices crash by more than a fifth.

It could be good news for households as the oil price fall could lead to energy prices being reduced.

But households should be warned that any impact will take a while to be felt, with some consumers on fixed-rate deals not noticing any major differences until next winter.

Will Owen, from Uswitch, said: ‘The oil price drop will only work its way through the system if it’s prolonged and starts to depress the wholesale prices which energy suppliers pay for gas and electricity on the open market.

‘As some suppliers’ gas contracts are linked to oil prices, and we generate almost 40 per cent of our electricity from gas, it won’t be until the gas price starts to be affected that we’ll see a further impact on electricity costs.

‘Likewise, given that the larger energy companies who supply most homes in Britain tend to buy several years in advance, there’s no guarantee this will lead to cheaper bills just yet.’

‘It simply isn’t right that the Big Six will pocket an extra £5billion over two years purely because people aren’t switching.’

Bulb added that in 2019, homes that didn’t switch away from SVTs also overpaid by a collective £2.2billion, meaning that over the span of two years, the Big Six is calculated to pocket around an extra £5billion from customers that haven’t moved to cheaper deals.

Even though the cap has reduced, it fell much less than people were expecting, considering that wholesale prices had taken a much welcome dive.

Wholesale prices were at their lowest for a decade at the end of 2019, with mild weather, a change in gas supplier and healthy supply margins all contributing to prices falling.

However, those who hoped that falling wholesale prices would drag down their bills automatically have been left disappointed.

The Ofgem price cap, which puts a limit on how much suppliers can charge households on standard variable tariffs, is decided depending on how much wholesale charges are at the time.

Millions customers are still stuck on expensive SVTs, rather than on cheaper fixed tariffs.

There is a number of reasons for this, including inertia and a confusing market, with many different tariffs available, all with varying offers.

To combat the confusion, some suppliers – including Bulb – offer just one tariff.

Its 100 per cent green, variable tariff averages £919 a year for customers, well below the price cap limit – although there are far cheaper deals out there, as we highlight in the table at the bottom of the story.

Bulb’s data was taken from Uswitch for the SVR and cheapest available tariff for each of the Big Six for across all of the 14 regions. Data samples were taken in October 2019 and February 2020.

To compare tariffs directly to the price cap, figures assumed typical use of 3,100 kWh/year for electricity and 12,000 kWh/year for gas in February 2020.

Around 2.8million over 65s are rationing their energy usage during colder periods out of concern they cannot afford their energy bills, separate data from Compare the Market claims.

Some 23 per cent of elderly people admitted they would cut down their heating usage during the coming months in order to combat rising households bills.

The impact of Storms Ciara and Dennis have led to 48 per cent also saying they are concerned that the cold weather would lead to higher than usual bills.

The increase in costs has led to elderly households suggesting that they would have to find an alternative way to pay for their bills, with 43 per cent admitting they would need to dip into their savings or use credit. 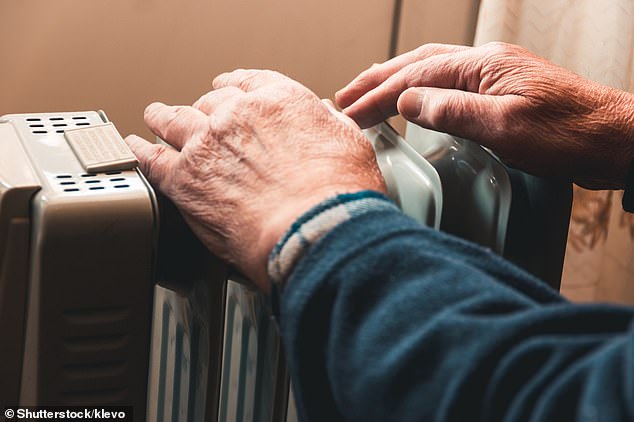 Cold: Around 2.8million of over 65s are rationing their energy usage during the winter period

A further 26 per cent say they would consider cutting down on expenditures, such as food even, to cover the escalated costs.

Peter Earl, head of energy at Compare the Market, said: ‘We hear a lot of commentary about how today’s over 65s are more financially secure than previous generations, but such a broadbrush perception risks leaving millions of elderly people out in the cold and overpaying for their energy in silence.

‘Not all over 65s are vulnerable, but many undoubtedly are.

‘With the memory of blizzards and a nationwide blanket of snow in March 2018 still fresh in the public’s mind, it is a tragedy that nearly a quarter of the elderly say they will take measures, including rationing their energy usage, to save money in order to stay warm.’

Further research from Compare the Market suggests that 18 per cent of people over 65 are on uncompetitive SVTs, equating to 2.1million elderly people stuck on deals which may mean that they are paying over the odds.

A further 12 per cent do not know what sort of energy tariff they have, meaning the number on a standard variable could be higher.

Based on average energy use, the average saving for those aged 65 and over who switch energy provider is £286, suggesting the nationwide cost of not switching for this age group alone is more than £600million.

The findings are based on a survey conducted in January 2020 of 2,437 UK adults aged 65 and over, commissioned by Compare the Market and conducted by Populus.

How to save on energy bills now

Millions of people are needlessly overpaying for their energy as providers hike prices for existing customers and save the best deals for those who switch.

But you don’t have to and it’s easier than you might think to fight back to beat the loyalty penalty.

With our new partner, Compare the Market, you can compare energy and exclusive deals and get rewarded with Meerkat Meals and Meerkat Movies* when you buy a qualifying product through them.

You could save hundreds of pounds a year on your energy.

>> Check to see if you can start saving money now

*Meerkat Meals and Meerkat Movies are available with qualifying purchases