Ministers fired a warning shot at banks this week as the top six lenders stand accused of failing to help mortgage prisoners switch to a better deal.

In an open letter Treasury ministers urged banks to move quickly to help mortgage prisoners following some four months of inaction from lenders.

The UK’s financial watchdog introduced rules in October that would make it easier for mortgage holders trapped on high rates to switch to a cheaper deal.

However, nearly four months later none of the ‘big six lenders’ – Lloyds, Nationwide RBS, Santander, Barclays and HSBC – has implemented the changes that would allow borrowers to switch.

On top of this, fewer than one in 12 mortgage prisoners who would benefit from switching will be eligible under the new system.

Up to half a million mortgage borrowers in the UK saw their home loan sold onto inactive or unregulated lenders following the financial crash, meaning their mortgage is now owned by a company or fund that can’t offer them a remortgage.

However, many of these borrowers no longer qualified for a new mortgage under tightened rules brought in after the crash. This means they can’t switch to a cheaper deal with a new lender, and their current lender can’t offer them a better one.

In October the FCA announced it had loosened these rules for mortgage prisoners looking to switch, as long as they aren’t trying to borrow any more money.

The FCA claims the rule change will allow lenders to use ‘a different and more proportionate affordability assessment for customers who meet certain criteria’.

But so far, none of the big lenders have changed their affordability rules to accommodate this group.

This week, the Government urged the banks to adopt the new rule changes.

Economic secretary to the treasury John Glen MP wrote a letter to banking trade body UK Finance stating: ‘I have discussed with Andrew Bailey, chief executive of the FCA, and he is in agreement that these eligible borrowers should have the opportunity to access cheaper deals with new lenders.

‘Now that the FCA rule changes are in effect, I expect as many as your members as possible to move quickly to offer new deals to this group of eligible borrowers.’

These include income and expenditure assessments, verification of income, an assessment of future income, and ‘stress tests’ to see if they could keep up with repayment if rates were to rise.

Many customers of closed books cannot pass these tests despite paying their mortgage regularly – even though they currently pay far more each month than they would if they switched.

This is why the Financial Conduct Authority proposed changes to its rules in March. It explored whether to move the assessment from an ‘absolute test’ to a ‘relative test’.

In simple terms, this means if a customer has been keeping up with repayments, they should be able to switch to a cheaper rate (so long as they do not borrow more) regardless of whether they meet the FCA’s tightened affordability criteria today.

Will the changes actually help?

The City watchdog the Financial Conduct Authority estimates that some 170,000 mortgage prisoners would save money if they were able to switch onto a new deal by remortgaging to another lender.

However, it estimates that the new rule changes will only help up to 14,000 of these borrowers – fewer than one in 10.

This means that around 156,000 borrowers owe more to their bank than their home is worth, or are in arrears, or do not match lenders’ criteria in some other way – meaning they are effectively on their own.

Banks warned that this would be the case when the FCA first floated the idea of changing the rules.

Paul Broadhead, head of mortgages and housing at the Building Societies Association said: ‘Although the FCA has urged all lenders to step up, the number of customers who can be helped is relatively small and therefore it could be complex for larger lenders to implement such products.

‘Ultimately we would like to see all mortgage prisoners on better-fit products with lower interest rates.’

Why are the banks hesitant to help?

What do the banks say?

‘We regularly review our policies and procedures and are currently looking at options to offer a reduced stress test for customers remortgaging without any further borrowing.’

A Nationwide spokeswoman said: ‘We’ve recently made changes to our policy on stress rates which we expect to support some borrowers on closed books who are currently unable to move lenders.

‘More broadly we’ve been actively engaged with the work being done by UK Finance, the Building Societies Association and the FCA for some time. That work remains ongoing and has recently had renewed impetus following the FCA’s helpful publication of analysis on closed book customers.’

A NatWest spokesperson said: ‘We are assessing the ways in which we can support these customers, working with the FCA and the industry. We allow our own existing customers to switch their mortgage balance to a new rate without any restrictions.

‘We reduced the minimum balance a customer needs before they can switch from £25,000 to £10,000 last year as part of an earlier FCA initiative.’

A spokeswoman for Santander said: ‘We welcome the FCA rule changes on mortgage prisoners as a positive step towards helping customers find the right mortgage deal for them. Since June 2019 Santander has applied a reduced stress rate to support borrowers who are looking to remortgage to us, and who are up-to-date with repayments and not looking to take on any additional borrowing.’

Barclays pointed to the UK Finance response letter quoted below.

A Lloyds spokesperson said: ‘We make it as simple as possible for customers to find the best mortgage deal for their needs and we’re at the forefront of the industry when it comes to supporting existing customers.

‘We offer a range of options and contact our customers proactively in a number of ways, and they can discuss their rate with us in branch, over the phone or online.

‘We also have a special process in place to help our own customers on closed books move to access an alternative rate without the need for an affordability assessment.

‘We are actively working with UK Finance to review what else we and the industry can do to help customers on closed books with other lenders.’

Active lenders are extremely hesitant to take on any borrowers who can’t pass affordability checks. In some circumstances, they’re also legally bound not to.

The FCA’s new rules are also voluntary, not compulsory. As such, if a lender thinks a customer is too risky, they don’t have to lend to them despite the rule changes.

The sticking point here is that some mortgage prisoners would not actually be helped by going onto a new mortgage.

There are lots of different types of mortgage prisoner, but they broadly fall into three different categories, and there are various reasons why lenders wouldn’t want to lend to any of them.

The first group considered to be ‘mortgage prisoners’ is customers who took out an interest-only mortgage with no way of repaying the loan once it matured.

These mortgages allow homeowners to just pay interest on their loan each month, with the expectation that they will pay the loan back in full once it matures.

Under current rules, lenders cannot offer new interest-only mortgages without a credible repayment strategy – meaning those with no repayment plans will not be able to switch onto another interest-only deal.

The second group is homeowners with high loan-to-values or who are in negative equity. This could include customers who took one of Northern Rock’s infamous 125 per cent loan-to-value mortgages, for example.

If the customer has a high loan-to-value ratio on their mortgage, lenders will consider them ‘riskier’ and as such they will be offered loans with a higher interest rate.

In this case there’s little to be gained for this group in remortgaging as they won’t actually save money by doing so.

The third group is those who have either seen a change in their income, or self-certified what they could afford to borrow when they originally took their loans, rather than having their income certified by their lender.

This practice was banned five years ago but many of the original mortgage holders who self-certified are now stuck.

Even now the rules have changed those who have trouble proving how much they earn will have a problem getting a mortgage. 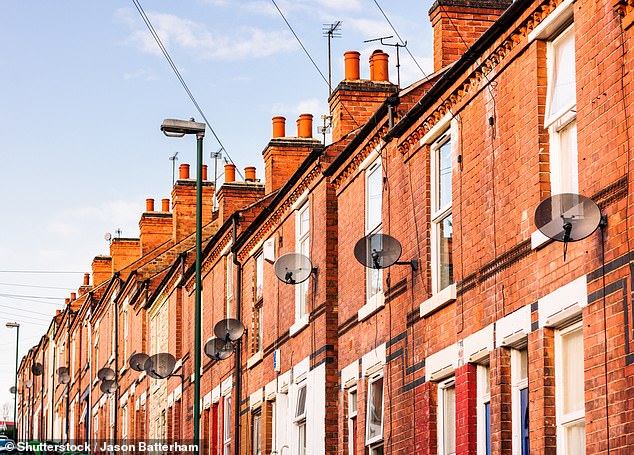 The FCA’s new rules are voluntary, so banks do not have to lend to anyone they deem too risky

John Glen MP’s letter to UK Finance added: ‘Given the complexity in resolving the issues around mortgage prisoners, it is important to closely monitor the impact of the recent rule changes, including the extent and pace of action by your members.

‘I am open to considering an extension to the regulatory perimeter where the benefits to consumers and markets can be demonstrated, however it is important that we do not raise false hope for these customers by pursuing a change that does not end up helping them.’

In a letter of response UK Finance said: ‘Our mortgages board met last week and fully recognises the imperative to consider practical ways to help eligible borrowers, if possible a wider cohort beyond the 14,000 identified by the FCA, who are up to date with their payments, are likely to meet commercial lending criteria and who could benefit meaningfully from switching to a cheaper deal.

‘We have established a UK Finance working group to take this forward and a wide range of lenders across banks, building societies and specialist lenders, including all the largest lenders, have committed to support this important work.’

Customers of inactive lenders and firms not authorised for new mortgage lending will be contacted by their mortgage administrator later this year.