Shares in G4S hit a 16-year low after a slew of one-off charges pushed it into the red.

The security services giant swung to a loss of £91million in 2019, down from a profit of £81million the year before.

Its books were rattled by £291million of impairment charges, mostly relating to its UK cash business, as several divisions were revalued and are thought to be worth less.

Shock charges: Security services giant G4S swung to a loss of £91m in 2019, down from a profit of £81m the year before

But it also took a hit from a £19million restructuring charge and £38million in costs for separating out the bulk of its cash-handling business.

Shares plunged 22.6 per cent, or 30.05p, to 102.7p, wiping more than £500million off its value. The tumble overshadowed what was a relatively optimistic update that showed revenues rose 4.7 per cent to £7.7billion.

Chief executive Ashley Almanza said the sale of most of its cash handling arm to US-based The Brink Company for £670million last month will boost profits this year by £300million.

The contractor employs more than half a million people in 90 countries and has cut back operations in risky areas in response to Covid-19.

Almanza said the disease has, so far, been ‘immaterial’ to its trading but it is testing staff who have been affected and one, in Singapore, has tested positive so far. 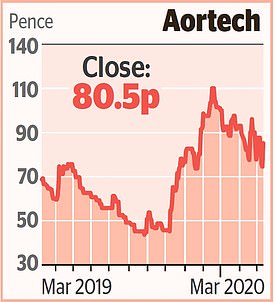 It is buying from one of its non-executive directors, David Richmond.

If shareholders approve the deal, paid for with cash and stock, Richmond will become chief executive of the renamed RUA Life Sciences.

A number of other companies also issued coronavirus-related updates. FTSE 250-listed publishing and events organiser Euromoney fell 5.4 per cent, or 52p, to 918p, after announcing it has cancelled 25 events and postponed 55, which will dent revenues by £6million, and profits by £5million, this year.

Ports operator Global Ports Holding insisted the impact from Covid-19 has so far been ‘minimal’, with its commercial ports operations largely unaffected and reservations at its cruise ports in the Mediterranean rising because of changes to schedules.

It climbed 4.5 per cent, or 44p, to 1014p, as the travel group said that although bookings have slowed in the past few weeks, its cumulative bookings for this summer are ahead of this time last year.

Tourism companies and airlines have been among the worst hit by the coronavirus so far but even a recommendation from UBS to buy Easyjet shares wasn’t enough to lift it. The airline fell 3.6 per cent, or 35.6p, to 965.4p.

Construction firm Costain slumped 34.1 per cent, or 54.2p, to 104.8p as it said it needs to tap investors for £100million after a £6.6million loss last year – down from £40million profit in 2018 – which it blamed on contract delays and cancellations.

Funeral provider Dignity dived 22 per cent, or 110p, to 390p as a profit fall of 31 per cent to £38million, which it put down to fewer people dying, missed forecasts. It scrapped its dividend in response and was cautious about its outlook.

Motor dealership Lookers crashed 35.1 per cent, or 12.95p, to 24p. It has pushed back the release of its annual results after it identified ‘potentially fraudulent transactions’ in one of its divisions.

It has started an investigation led by an external adviser, and will report its annual results in April.

And over on Nex, Britain’s oldest brewer Shepherd Neame was down 3.9 per cent, or 45p, to 1105p, as first-half turnover rose 3 per cent to £79million, with its own-brand beers and ciders selling well.