‘A tax cut for 31 million people’: Rishi Sunak increases National Insurance contribution threshold for hard-pressed British workers as he uses his Budget to put more than £100 back in their pockets in a move which could also help stimulate UK economy

Rishi Sunak today handed hard-pressed British workers a present in the Budget as he cut National Insurance contributions for millions.

From next month the threshold at which payments start will rise from £8,632 to £9,500, putting an estimated £100 a year back in the pocket of 31 million workers.

The Conservatives pledged in their 2019 general election manifesto to slash the amount people have to pay.

Ultimately the Tories want to increase the threshold to £12,500 over the next five years.

Delivering his first Budget as Chancellor, Mr Sunak said: ‘That is a tax cut for 31 million people, saving a typical employee more than £100.’

He added: ‘The Conservatives, the real workers’ party.’

From next month the threshold at which payments start will rise from £8,632 to £9,500, putting an estimated £100 a year back in the pocket of 31 million workers 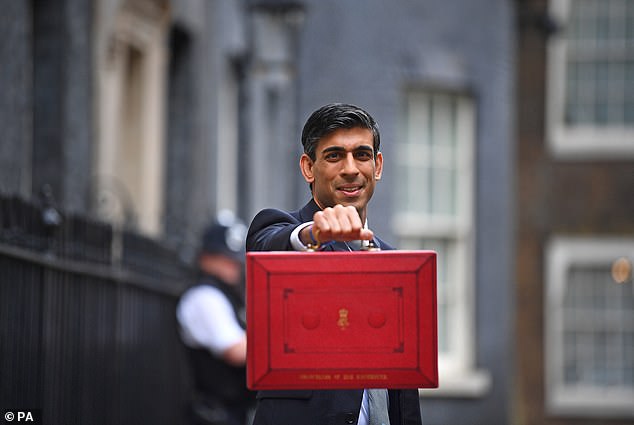 The pledged cut to National Insurance contributions was a key pledge for the Tories in the run up to the election in December last year.

The Conservative Party’s manifesto stated: ‘We not only want to freeze taxes, but to cut them too.

‘We will raise the National Insurance threshold to £9,500 next year – representing a tax cut for 31 million workers.

‘Our ultimate ambition is to ensure that the first £12,500 you earn is completely free of tax – which would put almost £500 per year in people’s pockets.’

The tax cut was widely expected to be included in today’s financial address after Mr Sunak was asked about his plans on Sunday.

He told the BBC’s Andrew Marr Show: ‘You know we talked in the manifesto in the campaign about National Insurance.

‘That is something that we said we would do and as I said my broad theme is to deliver on the promises that we made.’

Plans to push ahead with the tax cut were first confirmed by Mr Sunak’s predecessor Sajid Javid in January.

The increased threshold from next month means a typical employee stands to save about £104.

The self-employed who pay a lower rate, will see £78 cut from their tax bills. 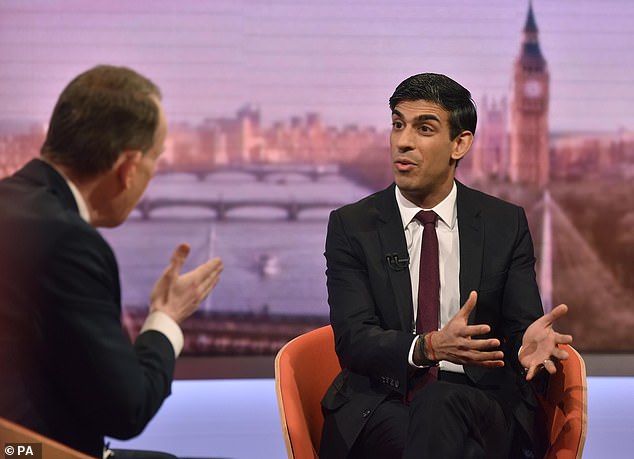 Mr Sunak was asked on Sunday if he intended to go ahead with the cut as proposed. He replied: ‘That is something that we said we would do and as I said my broad theme is to deliver on the promises that we made’

Mr Sunak was tasked at today’s Budget with walking the tightrope between showing the UK is prepared to cope with the coronavirus outbreak and demonstrating the Tories will deliver on their manifesto promises.

The Chancellor’s spending plans were rubber-stamped at a meeting of the Cabinet this morning as he told his colleagues the Budget will implement the manifesto on which the government had been elected.

He said it was ‘vital’ that proposed policies were delivered on and that there could be ‘no delay in laying the foundations for a decade of growth’.