As the coronavirus sweeps the world, there are growing fears we are headed for a global recession.

Some economists say a downturn will be short-lived if the infection is contained, with a rapid recovery predicted in the second half of this year.

But others say a prolonged outbreak could trigger a much graver crisis – and the main cause for concern is corporate debt.  Here, we answer your questions about what this means:

Ticking timebomb? Some economists say a downturn will be short-lived if the coronavirus infection is contained. But others say the outbreak could trigger a graver crisis

What is corporate debt?

Money owed by companies, including loans from banks and bonds, which are basically IOUs, which can be traded on financial markets.

how much debt have companies taken on?

About £50trillion, according to the International Monetary Fund (IMF). Companies have been encouraged to borrow money by the super-low interest rates.

Why are people talking about a corporate debt crisis?

Because the IMF says trillions of dollars of loans are a ticking time bomb.

It predicts companies will struggle to meet their commitments on debts of about £15trillion if the global economy slips into recession, even if the downturn is only half as bad as the 2008 financial meltdown.

With the crisis prompting fears that a major downturn is around the corner, that is a real worry.

Who are the borrowers?

Some of the world’s biggest companies, private equity firms and hedge funds.

Of the UK’s listed firms, consumer goods and housebuilders held the most debt, followed by energy and telecoms companies, then retail and industrial firms, according to Link Group researchers. 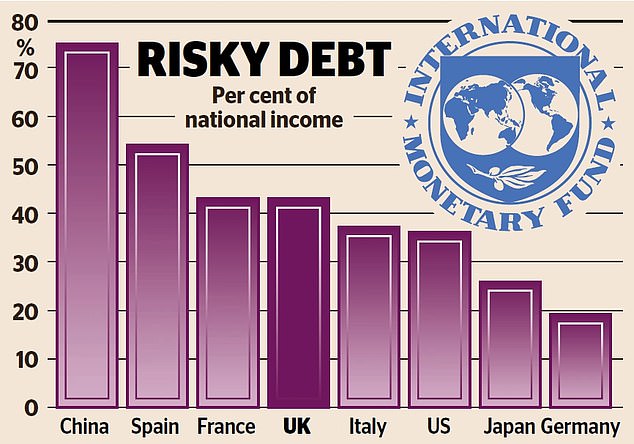 Who are the lenders?

Banks and investors. Those who have bought corporate bonds include pension funds and insurance companies.

The debts of listed UK firms rose for the eighth consecutive year in 2018/19 according to Link Group, reaching £443.2billion. That is an increase of three-quarters since a low point in 2010/11.

Why is it a problem?

If businesses which took on risky loans take a hit to earnings, they may suddenly find themselves unable to service their borrowings.

The IMF is also worried that the potentially toxic debt is spread around the system in much the same way as sub-prime mortgages were in the run-up to the financial crisis.

Sounds familiar… isn’t it reminiscent of 2008?

Yes, but much of the risk then was in the banking system. The IMF fears it has moved elsewhere.

I thought the system was meant to be safer now?

The banks are, but that’s not the end of the story.

Although the banks are less vulnerable, the risk has shifted to other parts of the system such as private equity and hedge funds.

Is debt really such a problem with interest rates so low?

Yes. If companies are heavily indebted and their earnings fall due to coronavirus, they could be unable to meet the repayments even at very low interest rates.

And in some cases if their share price or the value of their assets falls, it could put them in breach of loan conditions. If lenders then call in the debts, they could be unable to repay.

That in turn would lead to an increase in bad loans on bank balance sheets.

Will coronavirus trigger a meltdown?

Difficult to say. The IMF believes the outbreak will slow global economic growth but it has not yet predicted a slump.

Even if that does happen, the scale of the problem would depend on how bad the recession was, and what action is taken by governments and central banks.