In a note entitled ‘I Can See Clearly Now The Rain Has Gone’, it said December’s general election provided more certainty over Brexit, a swing factor for sentiment driving new home sales.

‘More consumer confidence and housing demand should see house prices edge up, helping housebuilder margins, while there will be more upside potential for volumes,’ said veteran analyst Clyde Lewis and his colleague Alex Stout in a note.

‘This will see the sector continue to throw off large amounts of cash which will mostly be returned to investors,’ they wrote.

Among Peel Hunt’s picks was Taylor Wimpey, although the stock probably benefited more from an upgrade by Bank of America Merrill Lynch (BAML) – which is now a ‘buyer’ – as its shares advanced 2.2 per cent, or 4.35p, to 202p.

The US investment bank also appeared to have undergone a Damascene conversion of sorts on the prospects for Vistry Group (up 1.3 per cent, or 16p, to 1285p).

The builder formerly known as Bovis was moved up two notches by BAML to ‘buy’ from ‘sell’.

The recommendation changes and commentary provide a curtain-raiser to the reporting season for the major quoted housebuilders, kicking off with a trading statement today from Taylor Wimpey. 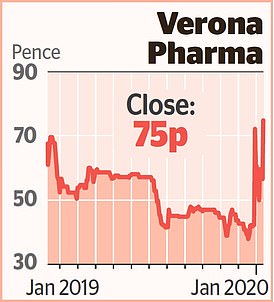 Shares in Verona Pharma were the day’s stand-out performers after its phase IIb clinical trial was hailed as a big success.

Patients were given the Verona drug as an add-on to the current, established medication. The results of the trial were described as impressive.

Turning to the foreign exchange market, an indication Bank of England rate setters may be receptive to an interest rate cut pushed the pound almost a cent lower to $1.2986 in early trading.

Near the top the blue-chip leader board was BAE Systems (up 3.6 per cent, or 21.2p, at 614p). The defence contractor and exporter also benefited from a little broker love from BAML, which moved its call to ‘buy’.

The firm said its purchase of ID Analytics would boost its ability to spot fraud and produce credit scores for clients.

Lloyds was among the FTSE 100’s main casualties after it emerged that Spanish competitor Santander’s UK operation was suffering as a result of intense competition in the mortgage market.

Heading the mid-cap gainers was Spirent Communications, the 5G telecoms equipment specialist, which advanced 14.2 per cent, or 29p, to 233.5p after it upgraded its profit guidance.

Elsewhere, shares in water firm Pennon Group jumped 7.1 per cent, or 71.5p, to 1078.5p following reports it is planning to sell its Viridor waste management business.

In the small-caps, Mereo Bio-Pharma was one of the top risers, surging 15.2 per cent, or 5p, to 38p as it inked a global licensing deal with cancer medicine group Oncologie.