Aston Martin’s stock was stuck in reverse as car makers across the world were battered by the upsurge in coronavirus cases.

It has been a staggering fall from grace for James Bond’s favourite marque, which was valued at £4.3billion and 1900p per share when it went public on the London Stock Exchange 17 months ago.

In India, Jaguar Land Rover-owner Tata Motors slid by 7.5 per cent, while Germany’s Volkswagen shed 9 per cent of its value, BMW lost 9.7 per cent, Ferrari fell 5.9 per cent and Renault dropped 12.5 per cent.

A fortnight ago, Aston warned there could be a huge slump in demand for its luxury cars in China and that it could start running out of components by the end of March.

China was Aston’s fastest-growing market last year, where turnover surged 28 per cent and made up 9 per centof its total revenues. 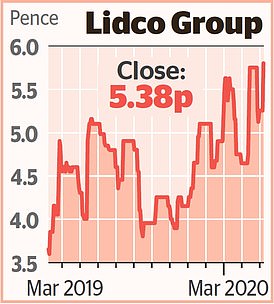 Shares in Lidco Group, which makes heart monitoring equipment, jumped as its Chinese distribution partner sold ‘a small number’ of its monitors in Wuhan.

It came as more patients are being admitted to intensive care because of the coronavirus outbreak.

Lidco is confident it could supply more equipment at short notice if needed and is already in talks with some health authorities.

Aston’s problems run far deeper than coronavirus. It has battled revenue warnings, emergency loans and has had to sell part of the firm to a consortium led by Formula 1 billionaire Lawrence Stroll.

Fuel was added to the fire last week when the release of the next James Bond film, No Time To Die, was pushed back from April to November, depriving Aston of a much-needed short-term bump in sales.

Markets crashed worldwide as tensions over the handling of the coronavirus outbreak broke an uneasy alliance between oil cartel Opec and Russia.

The plunge in the value of global benchmark Brent crude sent oilfield services firm Wood Group down 15.5 per cent, or 49.8p, to 271.8p, overshadowing the completion of a deal to sell its nuclear arm to US group Jacobs for £250million.

Technology firm Aveva nosedived 17.2 per cent, or 734p, to 3532p, as many of the blue-chip software provider’s customers work in the energy sector.

Trade fair and exhibition organiser Informa had its rating cut from ‘buy’ to ‘hold’ by Deutsche Bank analysts, who said an increasing number of events being postponed would knock the company. Its shares fell 5.4 per cent, or 32p, to 564p.

After markets closed, gambling firm Playtech said its Italian operations had been hit by a lockdown in the country’s northern regions.

As part of the restrictions, betting shops, arcades and bingo halls have been shut until April 3.

And FTSE 250-listed defence and aerospace firm Meggitt wasn’t saved from going into the red, falling 5.4 per cent, or 27.8p, to 483.8p, even though it bagged a multi-million-dollar contract extension with engine supplier GE Aviation.

Full-year profits rose 9 per cent to £49million over at shipping services group Clarkson after its broking division helped push sales 12 per cent higher.

Investment trust Pollen Street Secured Lending (PSSL) fell 5 per cent, or 42p, to 790p as its under-fire manager, Pollen Street Capital, fired its latest salvo in the ongoing battle between the firms.

It accused PSSL’s board of imposing operational restrictions on it which ‘have severely constrained’ its ability to manage the trust day-to-day.