The number of homes bought using a Lifetime Isa in 2019 boomed 215 per cent, according to figures from the first building society to offer the Government-backed savings scheme.

One price does not fit all when it comes to property, and though nationally the average home currently sits at £216,000, that can change drastically depending on where buyers look.

The most popular spots for first-time buyers using Skipton Building Society’s Lifetime Isa to buy a home in 2019. It adds a 25% government bonus onto savings of up to £4,000 a year

This is Money looked at property website Rightmove to find out just what that average purchase price of £248,000 could get a first-time buyer hoping to get onto the ladder in some of the most popular locations.

We previously revealed the most popular places for first-time buyers using the Lifetime Isa, with Bristol coming top and Birmingham, Manchester, Leeds and Reading rounding out the top five.

And how much space, and how many bedrooms and bathrooms, a buyer can get for themselves in those spots varies a lot, as we reveal below. 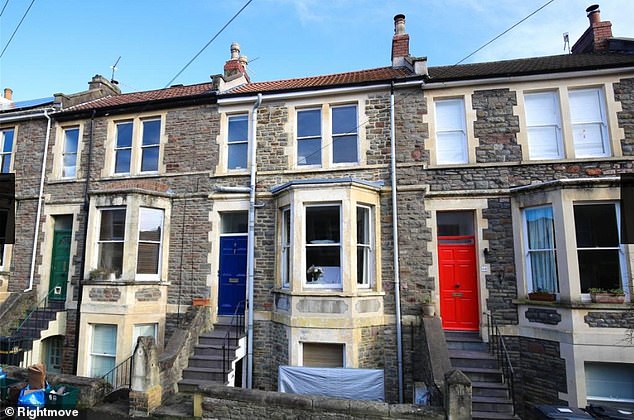 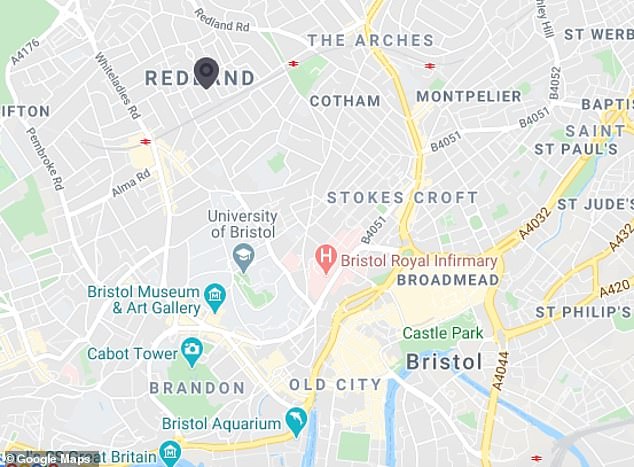 This £248,000 refurbished one bedroom flat is situated 1.5miles north west of central Bristol

Some 380 first homes were bought in Bristol in 2019, and the west of England city is well-known as one of the most popular places for young buyers.

Given those figures, it’s not surprising then that this one bedroom first-floor flat in the suburb of Redland, north-west of the city centre, is what could be had for that £248,000 price tag. 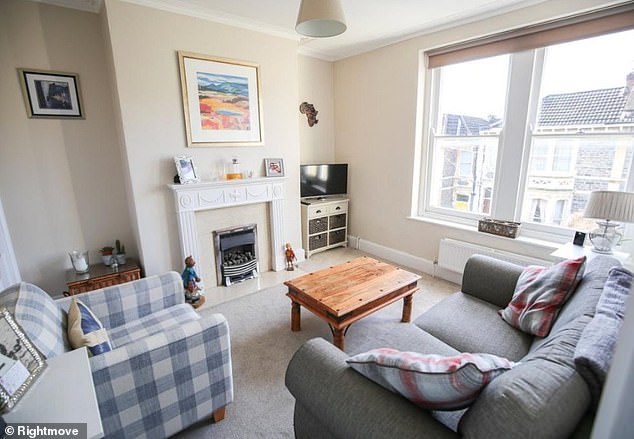 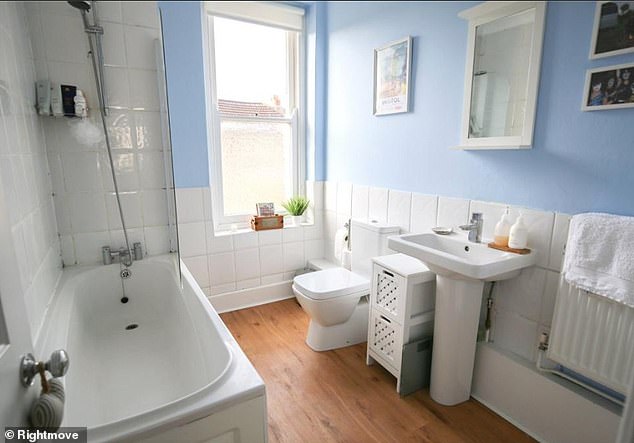 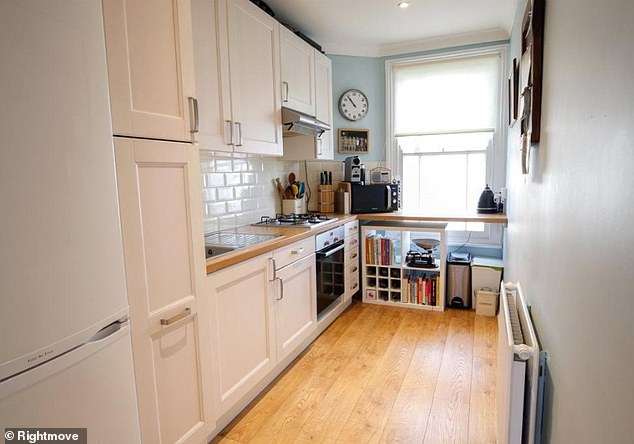 The first floor flat comes with a galley kitchen, a 12.25 square metre living room, a bathroom and one bedroom, for around 50 square metres total floor space

Set in a converted terrace house, it offers 50 square meters of total floor space, one bathroom, a galley kitchen and a decently-sized separate living room measuring 3.5m by 3.5m.

The suburb is around 1.5 miles from the centre of Bristol, a walk of around half an hour, and is 15 minutes on the train from the major train station Bristol Temple Meads. 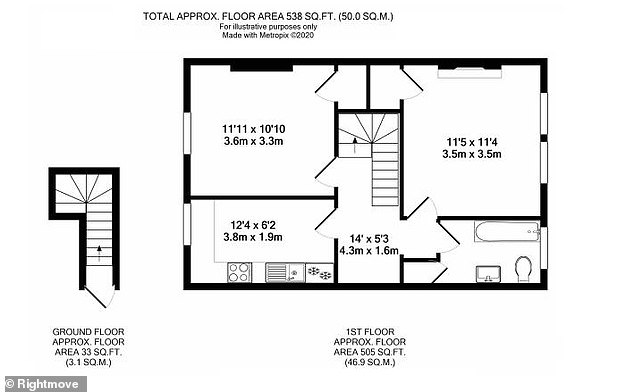 The average flat in Bristol sold for around the £248,000 mark, according to Rightmove 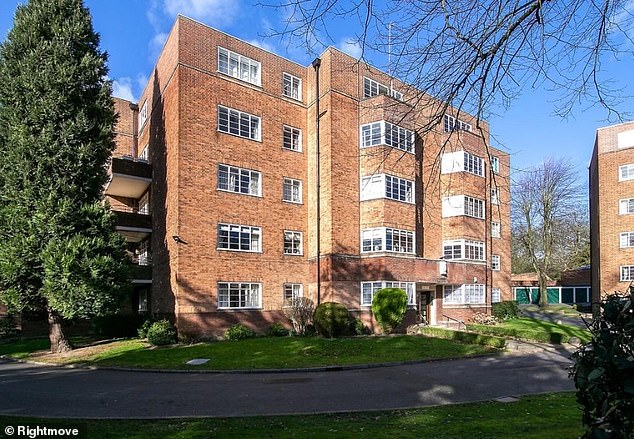 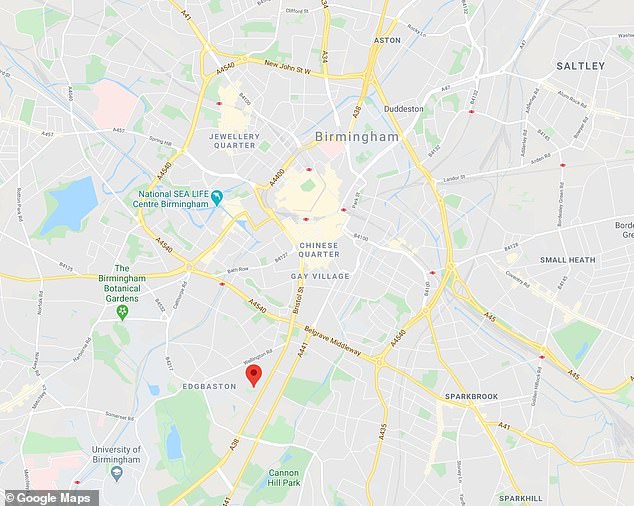 Travel almost 90 miles up the M5 from Bristol to Birmingham and a first-time buyer could get themselves an extra two bedrooms for £247,000.

This three bedroom apartment was recently refurbished and is set in a 1930s block and offers six rooms, including two bathrooms off a central hallway.

One of the three bedrooms comes with a balcony, and the flat comes with an open plan kitchen and a spacious living room measuring 5m by 5.3m. 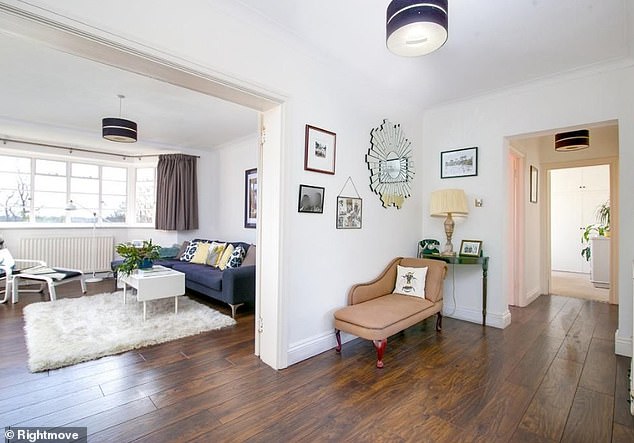 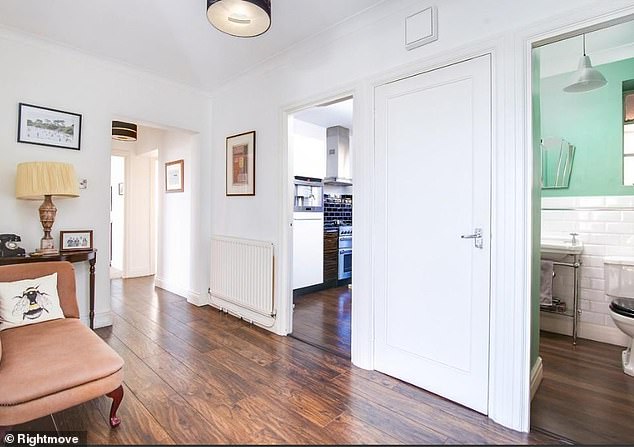 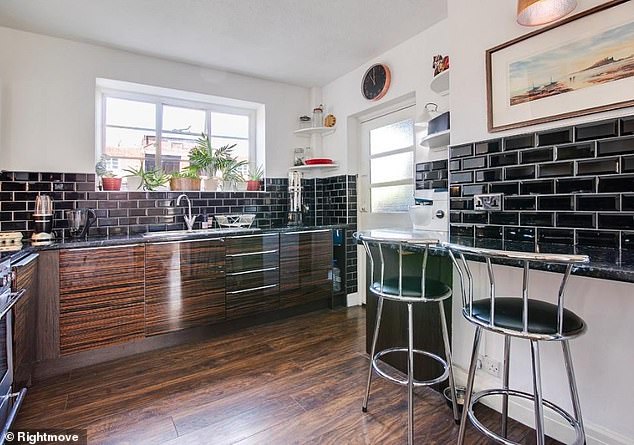 As well as three bedrooms, one of which has a balcony, the flat comes with an open plan kitchen, a living room and two bathrooms – one of which is decorated in brightly coloured mint green

Much like the one bedroom flat in Bristol, this flat is located just over a mile-and-a-half from the city centre and 1.5 miles from Birmingham New Street station, in the affluent area of Edgbaston.

The suburb, south west of central Birmingham, is best known as the home of the University of Birmingham, part of the Russell Group, and is also the location of the international cricket ground of the same name.

The flat might actually draw some enthusiasm from cricket fans, given how it is just half a mile, or nine minutes walk, from Edgbaston Cricket Ground. 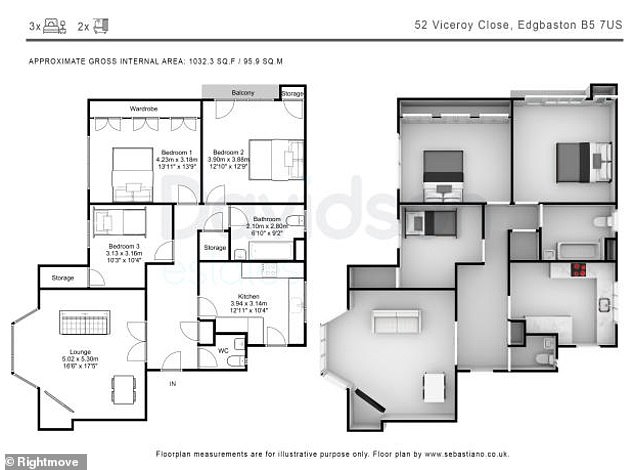 There’s no doubt the further outside of southern England buyers go the more they get for their money. This flat offers around 95 square metres of floor space 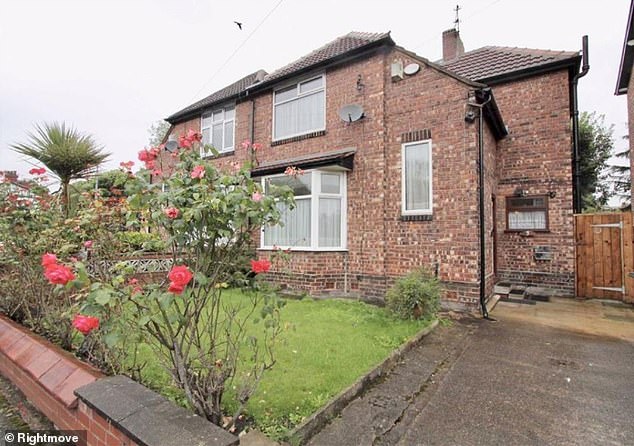 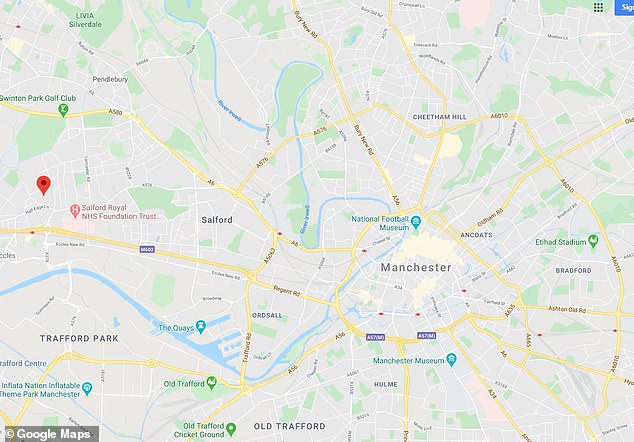 This three bedroom semi-detached is situated in the town of Eccles, almost 5 miles west of Manchester city centre

Just six fewer properties were purchased in Manchester compared to Birmingham using a Skipton Lifetime Isa in 2019, and it is possible a large number of those are also flats.

Venture further out from England’s third largest city though and for the first time on this list it is possible to spot an actual semi-detached house.

Situated in the town of Eccles, the historic home of the cake of the same name but also part of the constituency Labour leadership contender Rebecca Long Bailey, it is around 4.8 miles west of Manchester city centre. 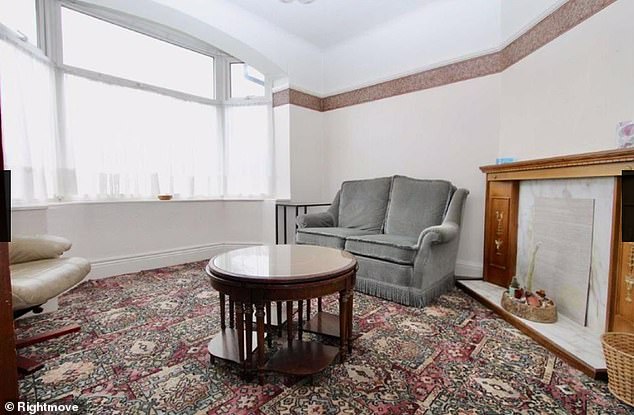 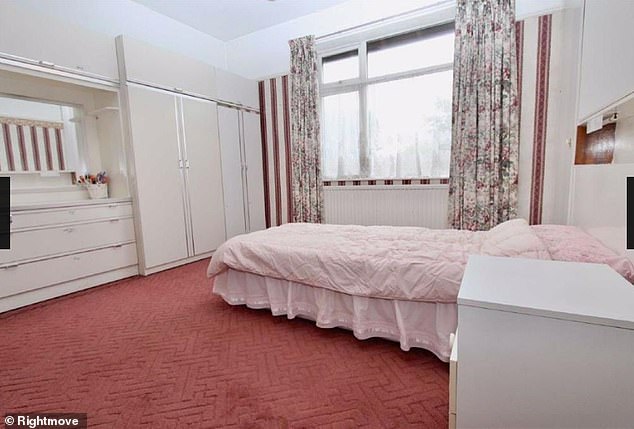 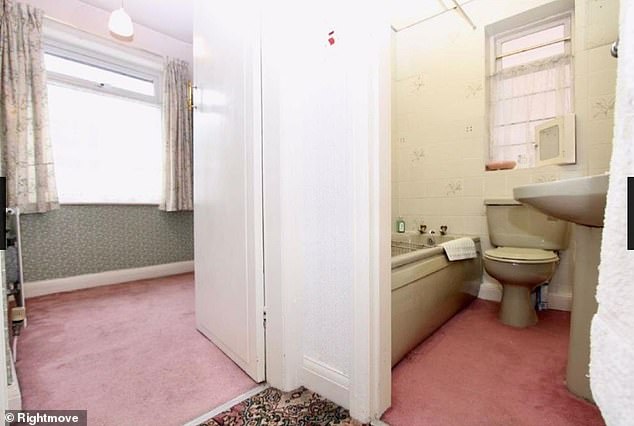 The house is spacious, and comes with three upstairs bedrooms and a bathroom

However, while this is hardly walking distance, it may still prove an attractive spot for someone working in the city centre, as it is just 10 minutes on the train and 12 minutes on the Manchester MetroLink tram.

Although those not wanting to spend half their life in traffic might wish to avoid the M602 at rush hour.

In terms of the house itself, it comes with three upstairs bedrooms and a bathroom, while downstairs features a lounge, dining room, separate kitchen, downstairs toilet, a conservatory, and a ‘sun room’.

In total, a buyer would get 113 square meters of floor space, plus a garden. 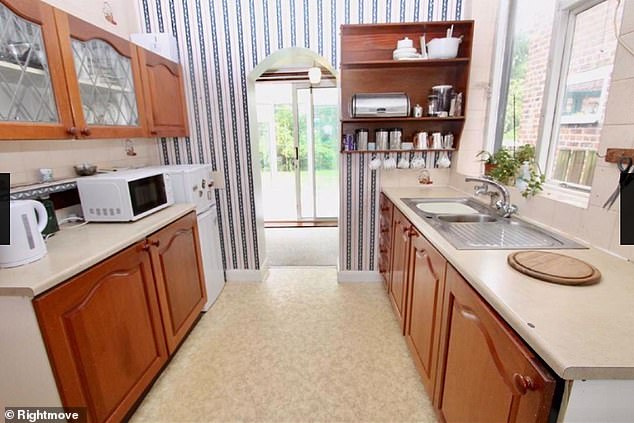 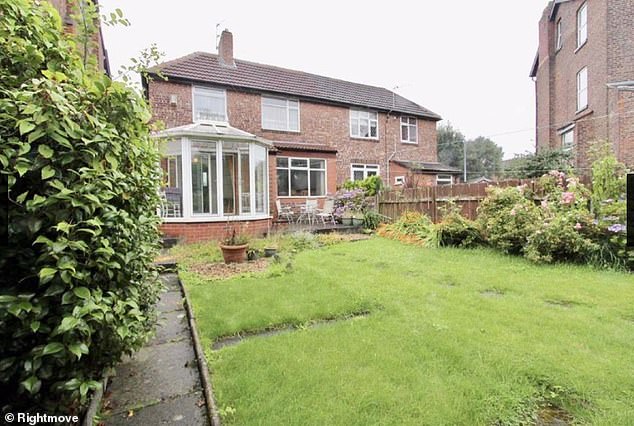 Downstairs, it comes with a kitchen, separate dining room and living room, and a decent-sized garden 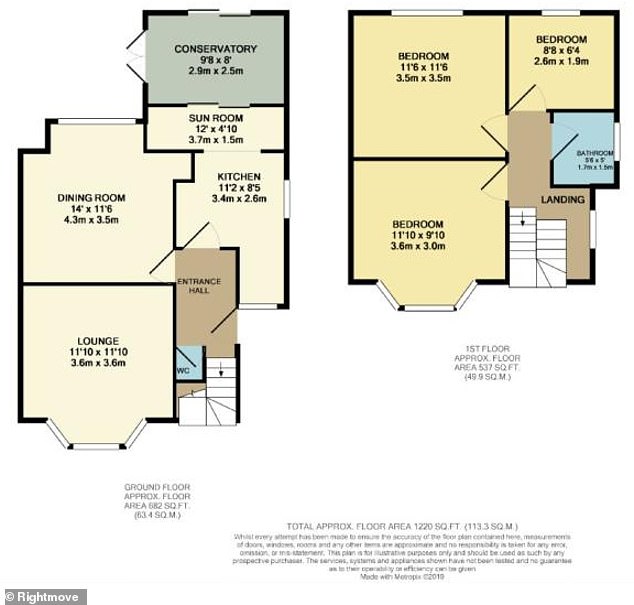 It comes with approximately 113 square metres of floor space 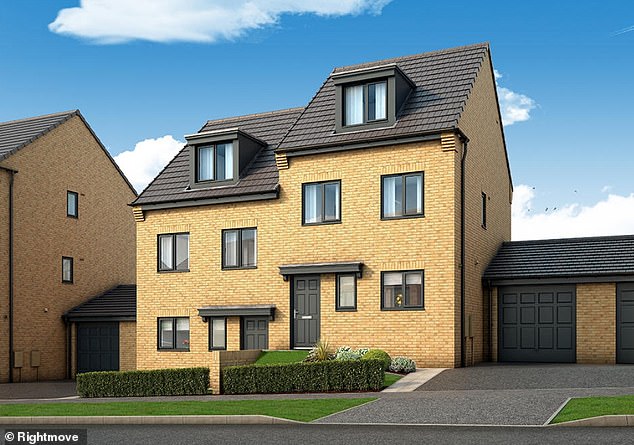 This new build property to the east of Leeds is a Help to Buy home and is spaced over three storeys. The average house in Leeds sold for just under £195,000 in 2019

Be warned, this is not a home for anyone who dislikes stairs.

This new build house, part of a new development from Doncaster-based housebuilder Keepmoat Homes called Timeless, appears to be a fan of the number three.

Three miles from Leeds city centre, three bedrooms, and three storeys. On the ground floor is a lounge, joint kitchen and dining room, and a downstairs toilet. 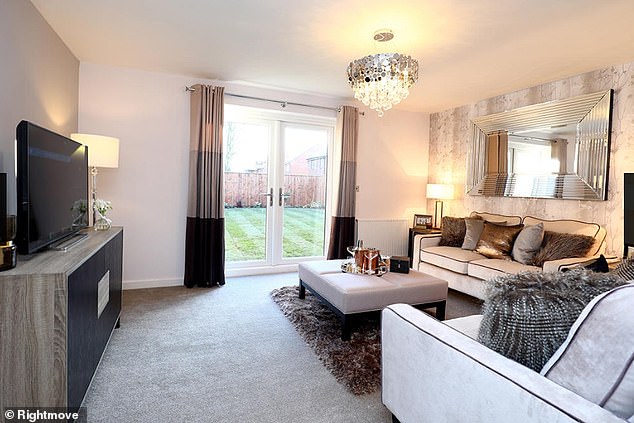 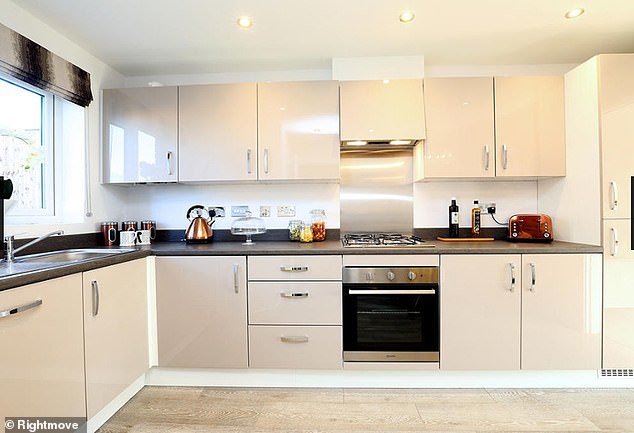 On the ground floor there is a kitchen and dining room, a lounge and a bathroom

Meanwhile on the second floor are two bedrooms and another bathroom, while the third floor is home to a master bedroom with an en-suite bathroom.

The Keepmoat development is also a Help to Buy property, meaning a potential buyer could need just a 5 per cent deposit with the help of the government loan scheme. 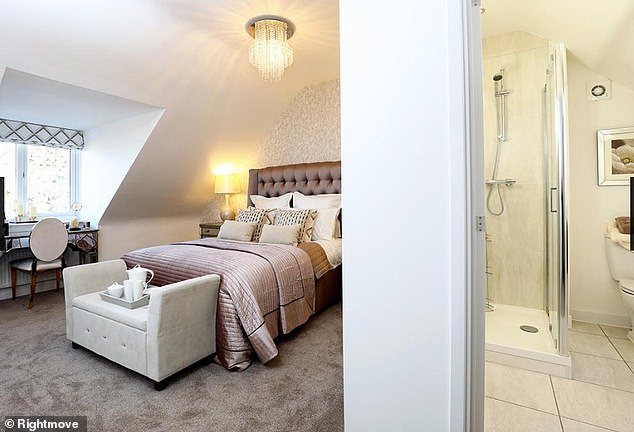 The three bedrooms are spaced over the second and third floors, including a master bedroom with an en-suite bathroom (pictured). The house is located around three miles from Leeds city centre

However, the average price of a house in Leeds is just under £195,000, while the average semi-detached home like this one sold for £205,000, according to Rightmove, meaning that if a first-time buyer had £248,000 to put towards a home they could potentially have a lot more flexibility compared to other areas of the country. 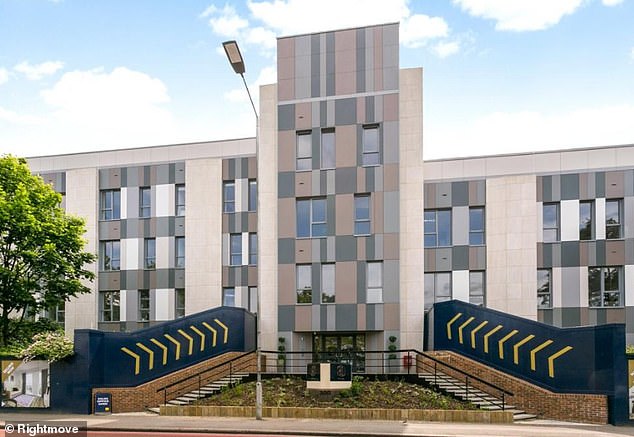 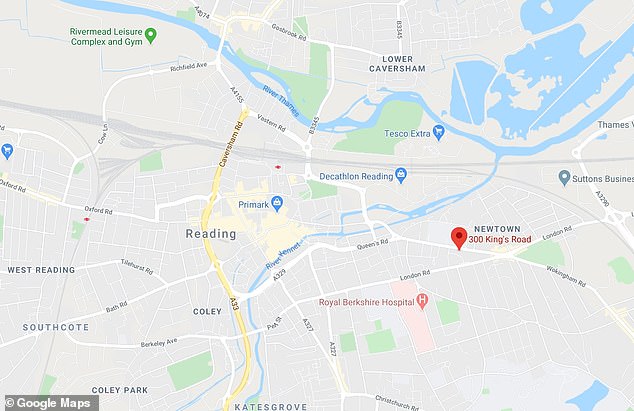 In Reading, Berkshire, a first-time buyer could purchase this one-bedroom flat for £248,000

Travelling nearly 200 miles back down the M1 and the M40 is enough to bring property prices right up, and the number of bedrooms first-time buyers can get for £248,000 right down.

This is likely in large part due to Reading being just 24 minutes from London Paddington on the train, even though the Berkshire town is large enough in its own right to be more than just a glorified London suburb. 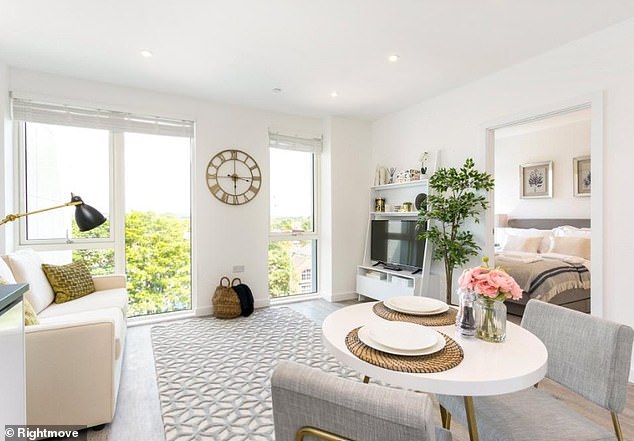 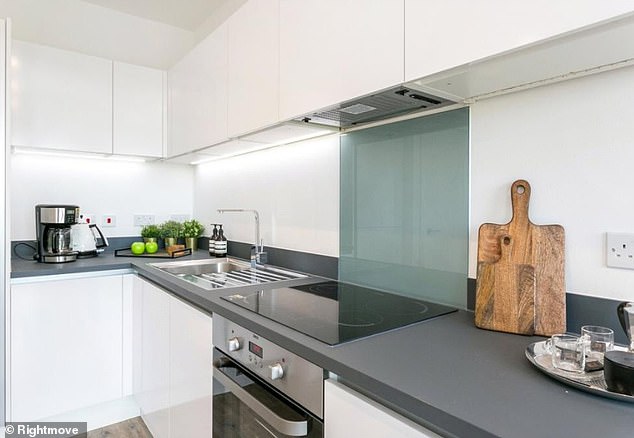 Property prices in Reading are more expensive than some of the other cities looked at in this article, meaning first-time buyers will be able to get less for that £248,000 purchase price

But were a first-time buyer working in London looking for somewhere outside the capital, this flat might not be a bad idea, located just under a mile from Reading station.

It comes with around 33 square metres of floor space, with a combined kitchen and living room, a double bedroom and a separate bathroom. 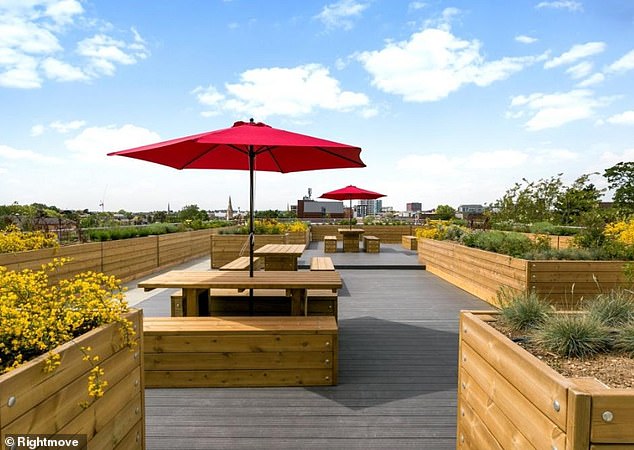 The block also offers a private gym for those living there and a rooftop terrace, with the flat just £500 under the £248,000 average purchase price for a first-time buyer. 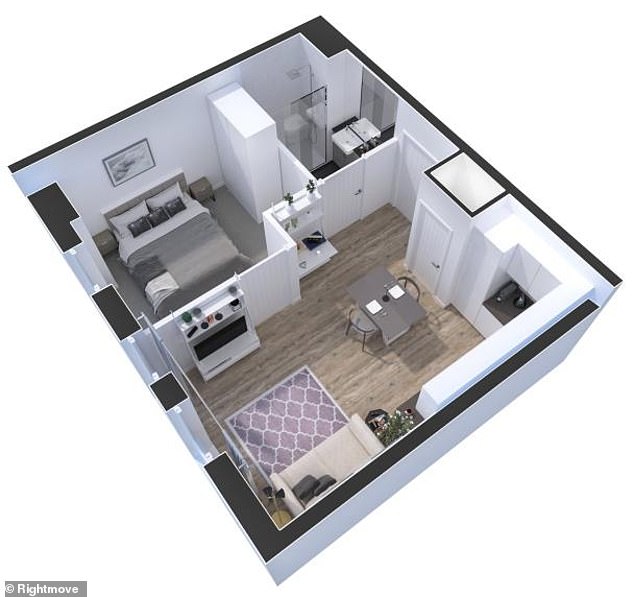 The flat is on the smaller side, coming with 33 square metres of floor space. The average property purchase in Reading was £364,500, according to Rightmove

Some 283 properties were bought in the Berkshire county town in 2019 by first-time buyers using a Skipton Lifetime Isa.

Overall, 11,381 houses were bought in 2019 using the government-backed savings scheme.

This means that though these were the five most popular locations for first-time buyers, 85 per cent of first-time buyers across the nation picked somewhere else to get on the property ladder.

And given £248,000 was the average purchase price, it means some homes would have been bought for more, and others bought for less.