Will millions of Britons really make the move to a mobile-only bank soon? New data suggests they are now true challengers to the big boys

Digital-only banks have signed up millions

One in five Britons will open a digital-only bank account over the next five years, with two-thirds of those planning on doing so in the next 12 months, new figures suggest.

Those tempted to make the move are driven primarily by the greater convenience offered by smartphone-based banks like Monzo, Monese, N26, Starling and Revolut.

More than two fifths plan to open one because of this, according to the survey of 2,000 people by comparison site Finder.

This is the second year in a row that Finder’s research has found this to be the number one reason why people would move.

A further 28 per cent of those opening an account said it was because of the offer of fee-free spending abroad from some of the start-ups.

Almost of half of those born after 1996 – ‘Generation Z’ – currently have an account with a digital-only bank, but the research suggested it is millennials who will be the likeliest to open one.

Some 28 per cent of those in that age bracket plan on opening an account over the next five years.

A quarter of those surveyed currently hold an account with a digital-only bank, a 165 per cent increase on the same survey last year.

‘The number of people opening accounts over the past 12 months exceeded the intentions of those who took our survey in 2019, so the trend appears to be gaining momentum.’

While those in the youngest age bracket – ‘Generation Z’ – were the likeliest to hold an account with a digital-only bank, research found millennials were the most likely to open one soon 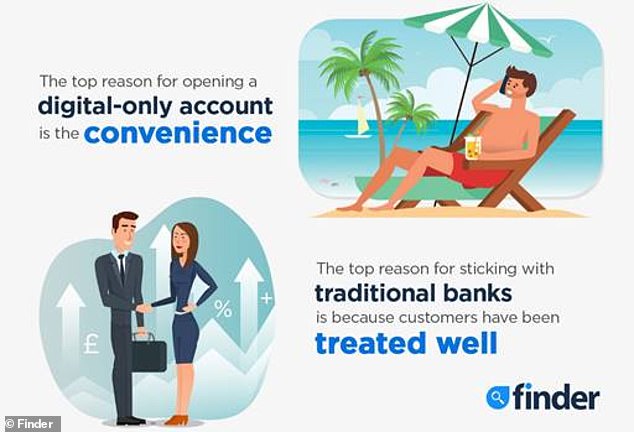 However 54% of those surveyed said they weren’t likely to open an account over the next 5 years, with two-thirds of those saying they’ve been treated well by their current bank

The survey appears to be in line with official switching figures, which have found smartphone-only current account providers Monzo and Starling consistently drawing customers away from the UK’s bigger banks.

Together they added more than 28,500 switchers in the three months to the end of September 2019.

Who gained the most switchers in 2019:

According to the latest official switch figures, in the first 9 months of 2019:

Overall, 739,923 accounts were switched between January and September.

Since switch service statistics for Monzo became available in the second quarter of 2018, it has gained a net 56,000 customers, the fifth-most.

When it comes to overall numbers, Monzo has more than 3million account holders and Starling just over 1million, but those who use the switching service to move accounts are particularly valuable as they are more likely to be moving over their main current account to one of the two banks.

This makes these customers more profitable than those who sign up just to use either of the banks for their holiday spending.

However, despite the fact the big high street banks often come further down the customer service rankings, nearly two-thirds of the 54 per cent surveyed who do not plan on opening an account with a digital-only bank said their current bank had treated them well.

Meanwhile 51 per cent of those with no plan to go digital said they valued being able to visit someone in a branch.

While Monzo and Starling did not feature in the latest bank account rankings from the competition watchdog, two other challengers in First Direct and Metro Bank topped the tables. The two app-based banks were ineligible for the survey due to not being big enough in 2017

Ostler added: ‘There are still many who have no plans to try digital-only banks.

‘Some customers are satisfied with their bank and see no reason to change – especially with the big players significantly improving their app offerings recently.

‘In response, the challengers are all playing to their budgeting, visualisation and spending insight strengths and Monzo have gone one step further, offering an incentive which allows people to be paid a day early.

‘Research we previously carried out found that almost half of those with digital-only accounts kept less than £1,000 in them, so the challenger banks will need to keep innovating if they are to convince customers to use them as their main bank.’