Contractor Capita shed more than a third of its value after admitting its restructuring is proving more difficult than expected.

Chief executive Jon Lewis has been trying to simplify the outsourcing giant since he was parachuted in to turn it around in 2018, following profit warnings.

Capita – dubbed ‘Crapita’ by its critics – has 63,000 staff across a range of industries and is known for being the collector of the BBC licence fee.

Shares crash: Capita Chief executive Jon Lewis has been trying to simplify the outsourcing giant since he was parachuted in to turn it around in 2018, following profit warnings

It was long a stock market darling and was the contractor of choice for Tony Blair’s Labour government, when it was the poster child for outsourcing.

But Lewis wants it to move away from low-value, labour-intensive contracts to focus on high-tech work, such as IT and providing services to other businesses, so that it stands out against its competitors such as Serco, Mitie and Interserve.

This was at least £100million more than investors were bracing for.

Revenues fell 6 per cent to £3.7billion, as it also warned the amount of cash it expects to generate this year was lower than it previously thought, which spooked traders and analysts. 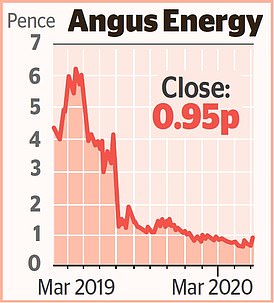 Angus Energy shares surged on the back of an analysis of a gas field in Lincolnshire.

Investors can expect to get a return of £25million from a £1.5million investment, consultants Oilfield International reckon.

It was a much better day for another struggling contractor – construction specialist Kier Group. It soared 28.1 per cent, or 28.5p, to 130p, as a huge push to cut costs appeared to be paying off.

Revenue dipped 9 per cent to £1.9billion in the six months to December 31. It stayed in the red, with a loss of £41.2million but its main overheads were cut to £14million from £35million in the same period of the year before.

The group has cut jobs and closed offices, though the restructuring programme itself came at a price of £49million in the six-month period.

Davies, who took over last April, has been trying to sell it since he finished a review last summer.

Excitement that more central banks could cut interest rates, following the example of the US Federal Reserve, wore off as the coronavirus epidemic appeared to gain more steam, and cases in the UK jumped.

The company, which is trying to buy North Sea oilfields from BP and South Korea’s Dana Petroleum and get a refinancing deal approved, said its priority is still to pay down debt.

It believes the acquisitions and refinancing would help with this and has committed to its operations being carbon neutral by 2030.

Elsewhere, Russian gold miner and processor Petropavlovsk gained 6 per cent, or 1.25p, to close at 22p after it was promoted to the FTSE 250 index.

And over on AIM, legal and professional services firm Knights Group lost 5.5 per cent, or 25p, to close at 430p after it bought two firms.

It has taken over Shulmans for up to £20million and ASB Law for up to £8.5million, which will add another 219 fee-earning staff to its team.

Knights will raise £20million by selling new shares to fund the deals and costs.