Markets regained steam as traders pinned their hopes on other central banks following the US example and cutting interest rates.

Investors initially balked at the Federal Reserve’s shock move on Tuesday to make the first emergency cut to rates since the financial crisis.

The measure was intended to combat the effects of the rapidly spreading coronavirus and stimulate the economy.

US stock markets climbed, with the Dow Jones adding 3.1 per cent, or almost 800 points, and the Nasdaq and S&P 500 rising almost 3 per cent

But it ‘raised more questions than answers’, CMC Markets’ chief market analysts Mike Hewson said, because it made people question what the Fed was seeing that traders weren’t.

But the Bank of Canada followed suit yesterday, and markets in Europe climbed as expectations rose that the Bank of England and European Central Bank could do the same.

US stock markets climbed, with the Dow Jones adding 3.1 per cent, or almost 800 points, and the Nasdaq and S&P 500 rising almost 3 per cent.

Wall Street was also buoyed by former vice-president Joe Biden making sweeping gains in the so-called ‘Super Tuesday’ vote, which is the biggest day for presidential primaries for the US Democratic party.

The disappointing result for Bernie Sanders, who is seen by many investors as a hostile candidate for markets, boosted traders’ moods. 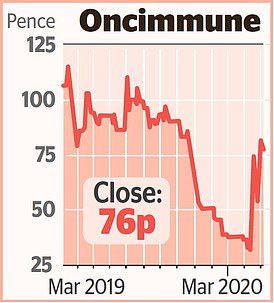 Cancer detection specialist Oncimmune fell 6.8 per cent, or 5.5p, to 76p after it launched a lung cancer test in the US with a company called Biodesix.

This mean doctors can do a comprehensive check with just one blood sample and avoid invasive procedures.

Consumer goods maker Reckitt Benckiser rose 5.4 per cent, or 314p, to 6100p as sales of soaps and hand sanitiser soared in the wake of the Covid-19 epidemic.

Oil prices fell by 0.8 per cent to $51.50 a barrel as members of the Opec cartel mulled whether to cut their production further.

The lockdown in China in particular has meant far less oil would be used than normal, fuelling fears that there will be too much available which will push prices even lower.

And gold prices also fell 0.2 per cent to $1,637 an ounce, as the metal started losing its shine in the wake of central bank efforts.

Guarantor lender Amigo rose 3.7 per cent, or 1.45p, to 40.55p, after its founder and former boss James Benamor once again left the board.

He has stepped down as a non-executive director of the firm, which has been branded a ‘legal loan shark’ by MPs, with immediate effect.

He left the board for the first time in September 2018, then rejoined last December, and still owns 61pc of the company, which is up for sale.

Oilfield and engineering services provider Wood Group made gains after the Competition and Markets Authority gave the green light to the £250million sale of its nuclear business to US group Jacobs.

Elsewhere, packaging group DS Smith was a hit after putting out a relatively mundane update.

It hasn’t been affected by the coronavirus yet, business is still going well, and the sale of its plastics division has completed.

Biffa was flat at 286p as the waste and recycling group said higher demand for recycled plastic offset a fall in demand for recovered paper last year.