The hedge fund managed by millionaire Crispin Odey is talking up the prospect of a bidding war breaking out for Sirius Minerals.

But Odey Asset Management, which has a 1.4 per cent stake in Sirius and like many retail shareholders opposed the Anglo deal, has not given up hope of a better offer.

Crispin Odey’s hedge fund Odey Asset Management  – which has a 1.4% stake in Sirius and like many retail shareholders opposed the Anglo deal – has not given up hope of a better offer

The hedge fund believes another group such as Canadian potash producer Canpotex could swoop.

Henry Steel, a portfolio manager at Odey, said: ‘Now comes the fun part where we wait and see if Canpotex or the Belarusians turn up to take control of this project.’ He added: ‘We could end up in a bidding war.’

Analysts were sceptical, however. John Meyer, mining specialist and head of research at corporate broker SP Angel, said the prospect of another bid ‘seems relatively unlikely’.

He added: ‘Building the mine is a technical challenge which should not be underestimated.

‘The marketing and sale of 10m tons a year of Sirius’s fertiliser product is an even bigger challenge than the mining.

‘You can have all the sales contracts you want but if the farmers decide they don’t want to buy that much new fertiliser, then they won’t and your product will go unsold.

‘Added to that, in the short-term the coronavirus outbreak means acquisitions are not top of anyone’s agenda at the moment.’ 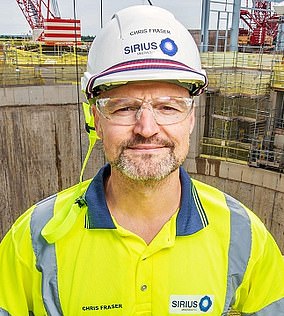 Sirius Minerals chief executive Chris Fraser walks away from the deal with £6.8million for 124m shares.

He was handed the bulk of his shares when he reversed his company, York Potash, into a firm called Sirius that was already listed on the London Stock Exchange.

Fraser, 45, was paid £18.6million for York Potash by Sirius in 2011 and stays in his role for at least a year once the takeover completes.

He will earn the same in benefits and pension, which were £13,000 and £8,000 respectively in 2018, as well as being eligible for annual bonuses and long-term incentive plans.

He added: ‘Everyone’s battening down the hatches.’ The vote to approve Anglo’s takeover ended a tense stand-off between many retail shareholders – who wanted a better deal – and the company, which supported the 5.5p a share offer.

Odey joined forces with private investors in slamming Anglo’s bid for being too cheap – branding it a ‘mockery’.

He built up a 1.4 per cent stake in the company in the run-up to this week’s crunch vote and voted against the takeover, saying Anglo’s offer should be at least 7p per share.

The average price Odey paid when it bought Sirius stock was 4.9p – cheaper than the 5.5p Anglo bid.

Odey could have made as much as £1million from the deal but would stand to make even more if a higher offer came in.

Sirius needed rescuing after it failed to secure £400million worth of funding last September.

This was crucial to unlocking another £1.9billion that it needed to finish building its £4billion Woodsmith mine, close to the seaside town of Whitby, which would feature a tunnel leading to a processing plant on Teesside.

After the bungled funding round Sirius said it would go back to the drawing board and either bring on a strategic investor or work out another way to tap the City for cash.

Anglo swooped in with its proposal in January, after it declined to become a strategic investor and said it wanted to buy the whole thing.

Under the current timetable Sirius’s shares will be delisted from the stock market on Monday, March 16.

Anglo got the approval of 80 per cent of Sirius shareholders who voted on the deal.

It needed to secure at least 75 per cent of the votes.

Sirius shares had languished below 5p per share in the days running up to the vote, indicating there was some unease about whether the deal would go through.