The aim is to make their new battery-powered BMW i4 electric prototype – designed to take on Elon Musk’s Tesla Model 3 – and their future cars sound cool.

That’s because while the prototype i4 has dramatic performance, the near silence of the electric drive can risk making the experience feel soulless.

Soundtrack over silence: This is the Concept i4 from BMW – an electric car that makes a sound when it moves that’s been scored by an Academy Award winning film composer

To counter this BMW has sought put some aural heart and emotion into battery-powered motoring to help overcome the lack of sound drivers have grown used to from conventional petrol and diesel engines.

Rather than leave things to chance, BMW has hired the services of the top blockbuster film composer who penned the music to movies including Gladiator, Batman, Pirates of the Caribbean, The Last Samurai, The Da Vinci Code, 12 Years a Slave, and Dunkirk.

He also won an Academy Award for his original score for The Lion King, and has worked on the forthcoming 007 movie No Time to Die and the new Tom Cruise film, Top Gun: Maverick.

He launched the new electric-drive soundtrack for the i4 at its world premiere today.

The ‘ready-to-drive’ and ‘start-stop’ sound for all-electric BMW models and BMW plug-in hybrids will be introduced as a standard feature worldwide from July 2020.

With its large exaggerated and almost cartoonish grille, the new i4 is set to go into production early next year as BMW’s first all-electric model in the premium mid-size class where it will go head to head with the Tesla Model 3. 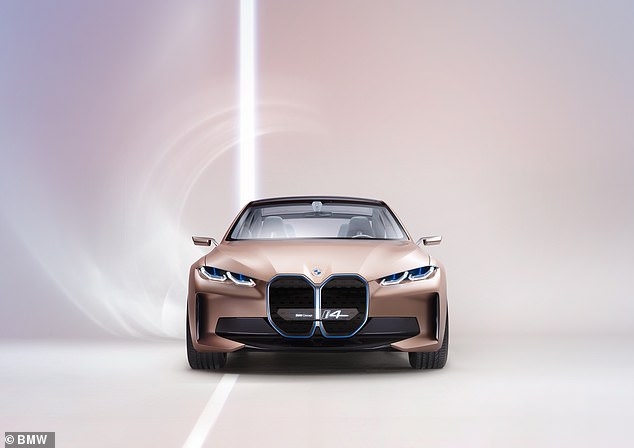 With its large exaggerated and almost cartoonish grille, the new i4 is set to go into production early in 2021 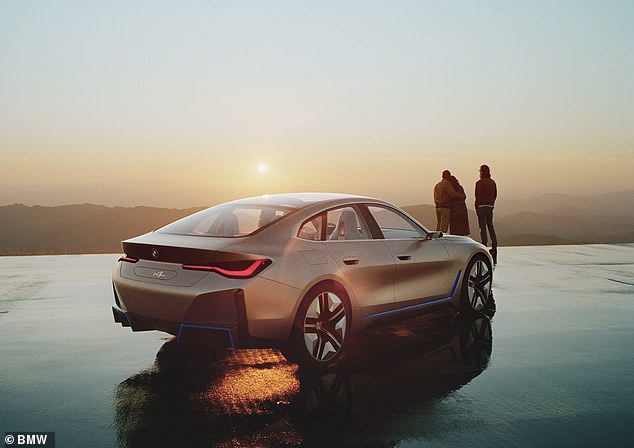 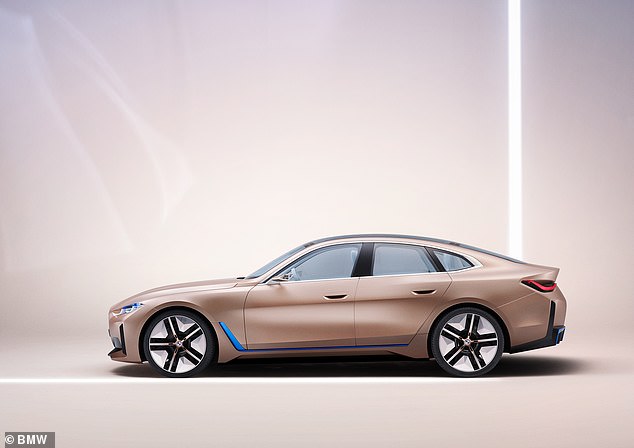 The electric motor drivetrain developing 530 horse-power promises acceleration from rest to 62mph in just 4 seconds up to a top speed of 124mph with a range of 373 miles.

‘The silence of electric drive systems is often cited as a major benefit of electric mobility. As the choice of electrified models increases, however, it also means some drivers are missing out on the emotional appeal of sound.’

Mr Zimmer, who has a sound studio in Santa Monica, California, said: ‘We have an extraordinary opportunity to turn electric driving in a BMW into a very special experience with the help of great sounds. 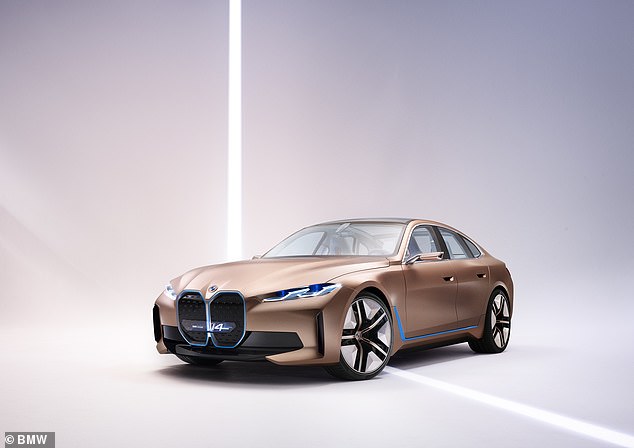 BMW claims the Concept i4 has a range of 373 miles. It will need it to rival the 348 miles of the rangiest Model 3 on sale today 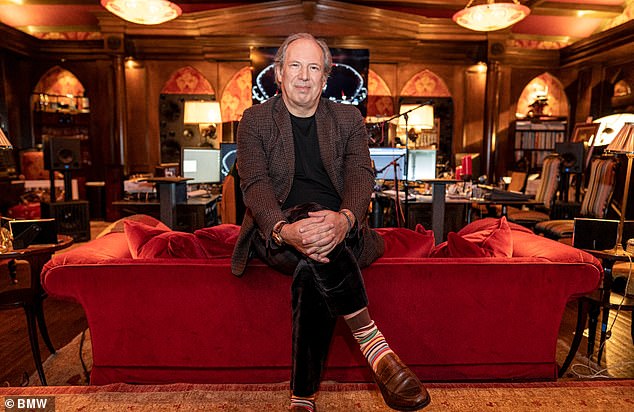 BMW has hired the services of Hans Zimmer who penned the music to movies including Gladiator, Batman, Pirates of the Caribbean, The Last Samurai, The Da Vinci Code, 12 Years a Slave, and Dunkirk. 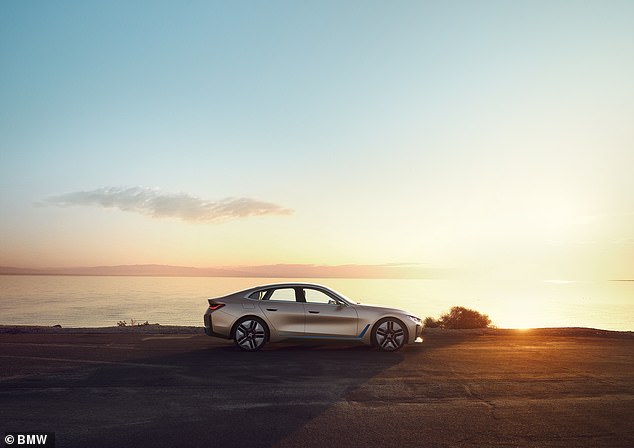 ‘I am relishing the challenge of co-designing the composition for future electric BMWs.’

He said: ‘We hope the sound we created is classic yet surprising and has a feeling of lightness that is fitting for a BMW.’

The sound ‘repertoire’ of the BMW i4 covers the variety of driving ‘modes’ available to motorists , from the standard sound in cruising mode to ‘the more intense tones of ‘Sport’, he said. 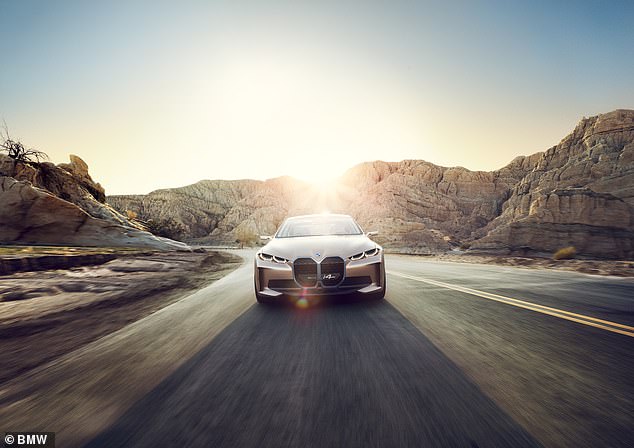 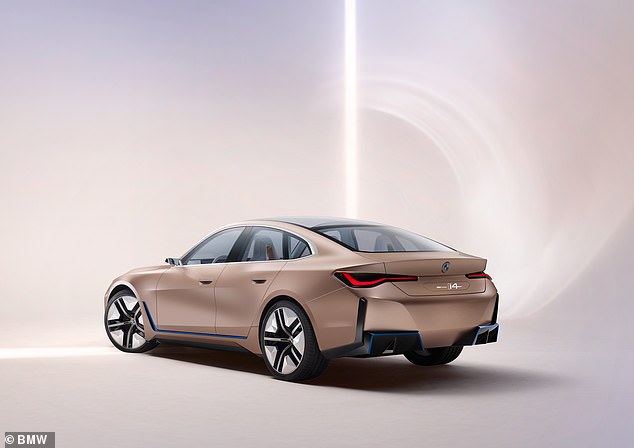 The styling is very much in-keeping with the wider BMW range, somewhat replicating the shape of its popular saloon models like the 3 Series 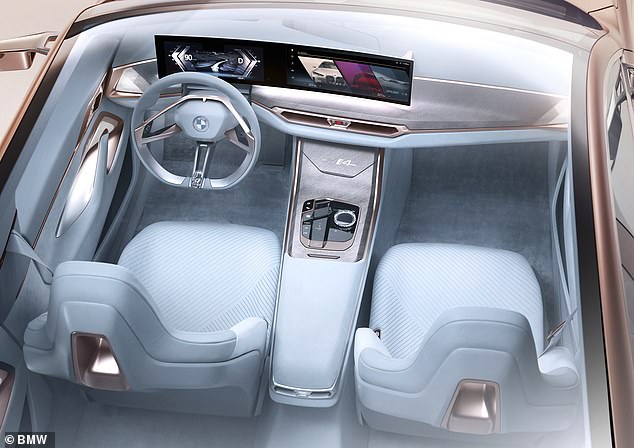 The cabin is, as you’d expect from a concept, extremely futuristic. How much of this is kept for next year’s production model is unknown

The ‘sport’ sound is a soft but rising crescendo that feels like (to my ears at least) the opening bars of Pink Floyd’s ‘Dark Side of the Moon.’ The cruising mode is similar, but softer and more ethereal.

Acoustic accompaniments to a door opening – like an electronic ‘plink’ – and when starting the car are also part of the car’s ‘soundscape’,

New legislation at requires electric cars to have an artificial sound to warn pedestrians of their impending approach. And that will provide another opportunity for composing a sound-scape.

Mr Zimmer has said in the past: ‘Electric cars don’t need to sound like a space-ship or a lawn-mower.

‘And silence is not the best way. On the outside you will kill people walking in the way. We have to help that a little bit.’ 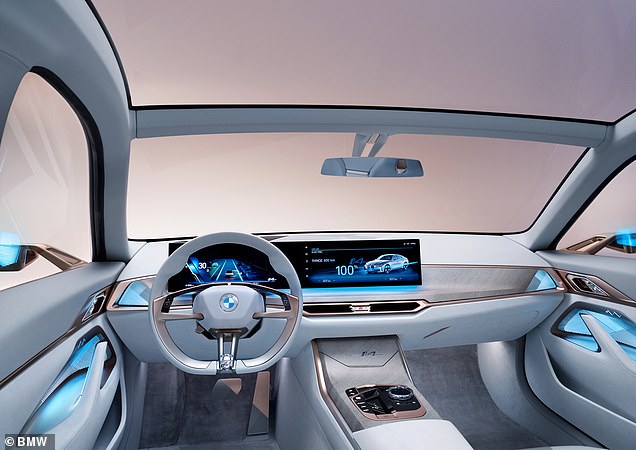 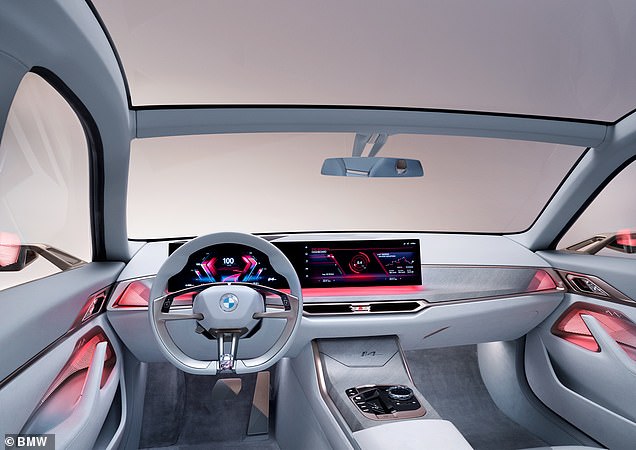 In different driving modes, the interior accents change. Cruising mode has the cabin shining blue but if you select sport it all turn red 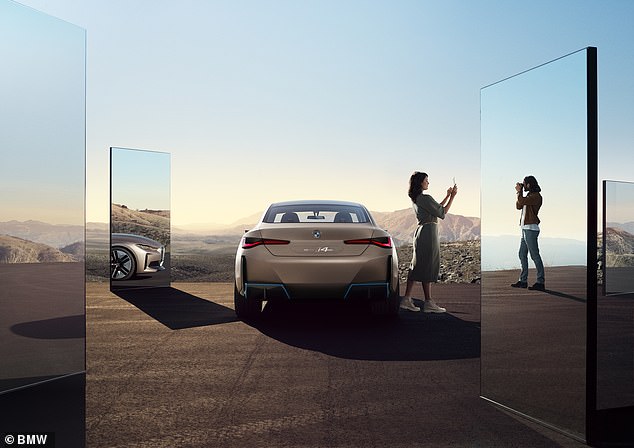 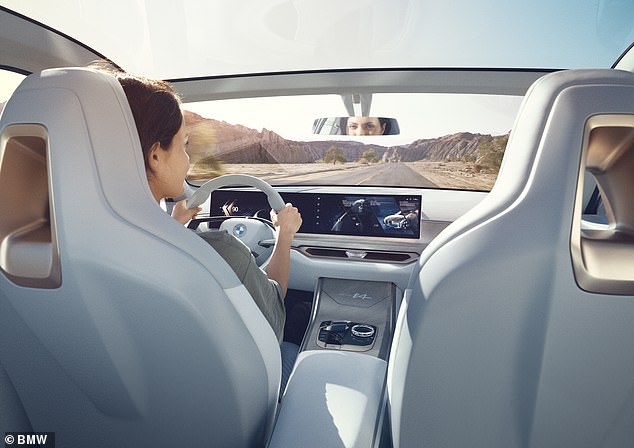 BMW said: ‘The character of the i4 is not only a product of its design, but also of its visionary sound profile.

‘Hans Zimmer composed the sound of the i4 together with BMW sound designer Renzo Vitale.

‘It will imbue BMW’s electric models with extra emotional depth by connecting the driver with the vehicle’s character on another level through individual tones and sounds.’

Jens Thiemer, BMW’s senior vice president for customers and brand: ‘Sound has always played an important role in the emotionalisation of our vehicles.

‘Now we are taking the joy of sheer driving pleasure to a new level and are particularly pleased to be working with Hans Zimmer to create the new sound world of electric mobility at BMW.’ 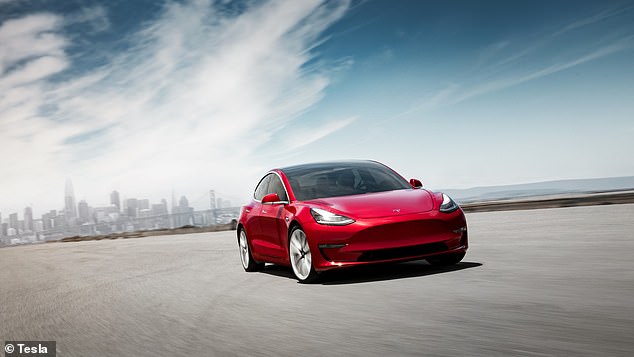 The Tesla Model 3 is the going to be the biggest rival for the i4. The American family car has proved hugely popular in the US and across Europe 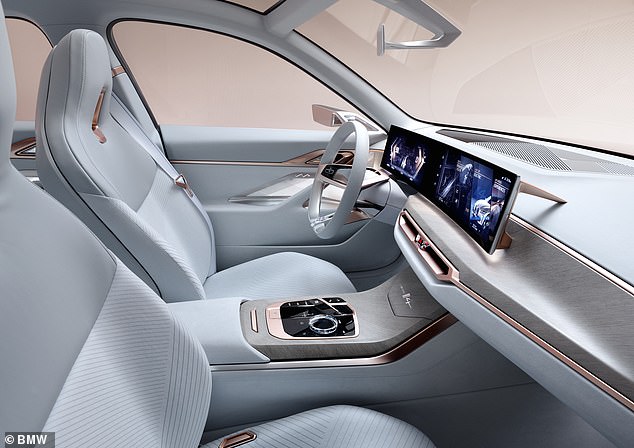 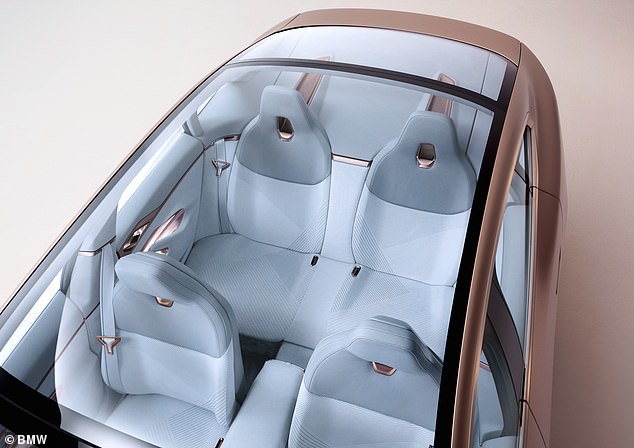