McLaren today launched its new 205mph British-built 765LT supercar after subjecting it to a strict diet and rigorous work-out regime to ensure it can outsprint its chunkier Continental rivals.

The new lightweight two-seater with a £280,000 price tag promises drivers ‘almost telepathic driver engagement’ and a driving soundtrack from the four exhaust pipes that drivers will feel in the seat of their pants.

It is the sixth extended length McLaren – and the fifth road-going version – to bear the LT or Longtail name since the first racing car with that moniker from 1997. First deliveries are in September.

765 three ways: The new McLaren Super Series model is called the 765. It produces 765 horsepower and just 765 will be made. We understand where the name has come from 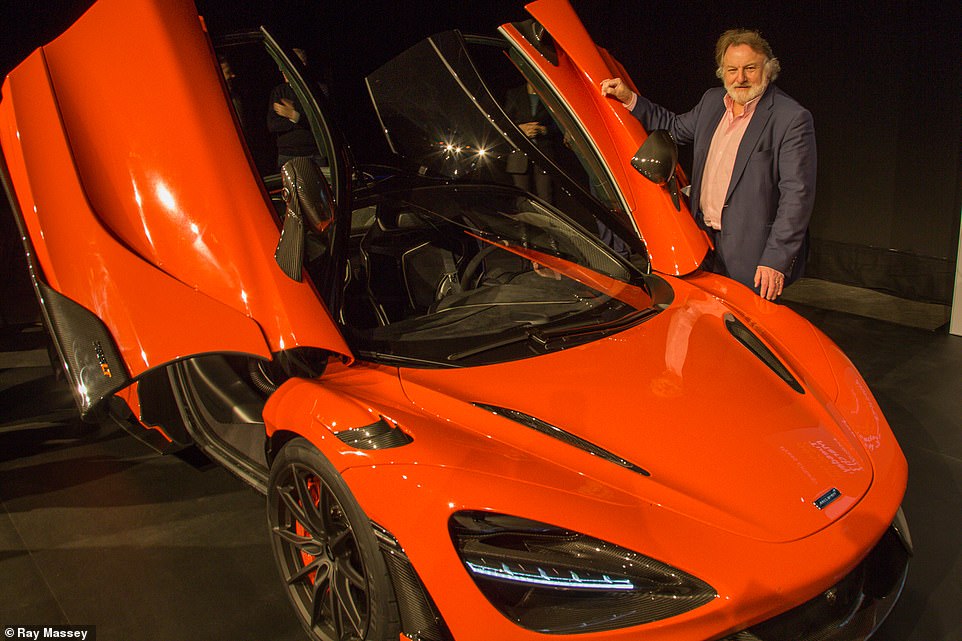 Daily Mail’s Ray Massey had an early sneak peek of the McLaren 765 before it was due to be unveiled at the Geneva Motor Show today. The event was cancelled last week to prevent the spread of coronavirus, meaning the car was launched at McLaren’s UK HQ

It was to have been unveiled for its world debut at this week’s Geneva Motor Show, before this was cancelled at the last minute on Friday because of the coronavirus outbreak.

So instead the firm held a virtual online international launch and press conference from its UK headquarters in Woking, Surrey.

Thankfully, I had been privy to a secret sneak peek and all-over inspection of the car with its two distinctive swing-up doors in the UK well before the covers came off and the killer bug started to take its toll on health and large gathering events such as the Geneva show.

In keeping both with its name and its 765 horsepower, a limited run of just 765 individually numbered cars will be built for customers as ‘the most powerful and responsive road-legal McLaren LT to date’.

The new McLaren 765LT is powered by, and takes its name from, a powerful 765 horsepower 4.0-litre twin-turbo V8 petrol engine linked to a 7-speed automatic sequential shift gearbox that propels it from rest to 60mph in just 2.7 seconds and to 62mph in 2.8 seconds.

McLaren says that puts it 0.5 seconds faster than a Ferrari 488 Pista, and on a par with a Lamborghini Aventador SVJ and Porsche 911 GT2 RS.

But it is the sprint to 124mph in just 7.2 seconds where the McLaren’s leaner weight shows its advantage, leaving its heavier rivals trailing in its wake, with the Ferrari taking 7.6 seconds, the Porsche 8.3 seconds and the Lamborghini 8.6 seconds. 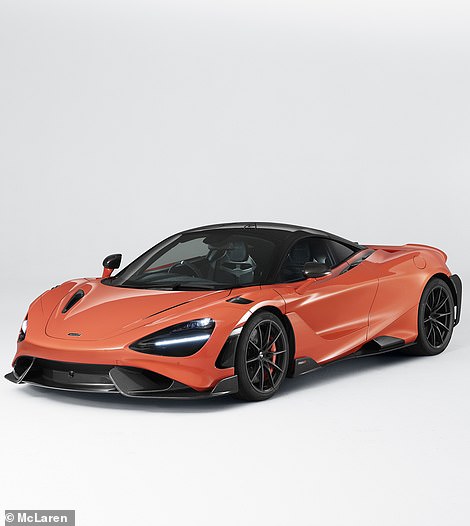 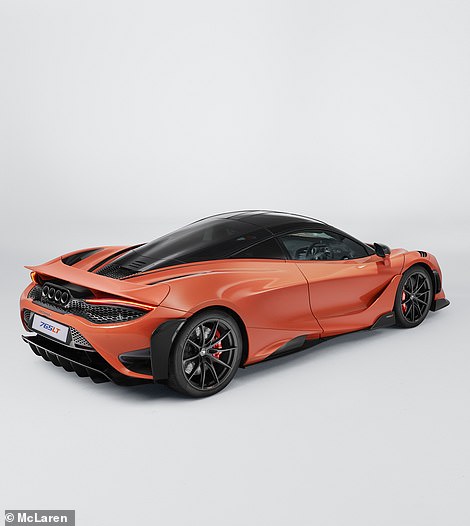 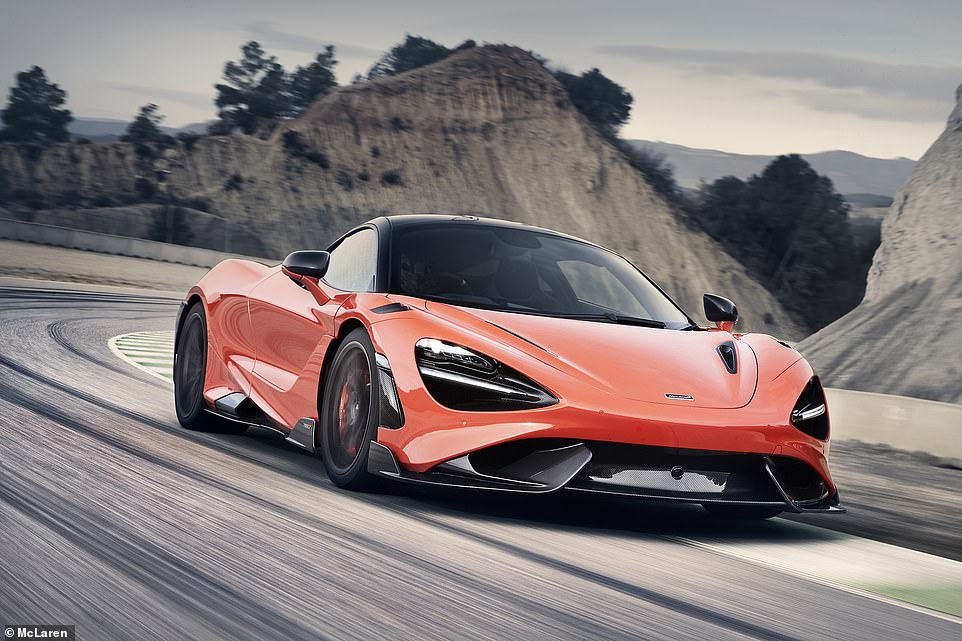 The new McLaren 765LT is powered by a 4.0-litre twin-turbo V8 petrol engine linked to a 7-speed automatic sequential shift gearbox that propels it from rest to 60mph in just 2.7 seconds and to 62mph in 2.8 seconds 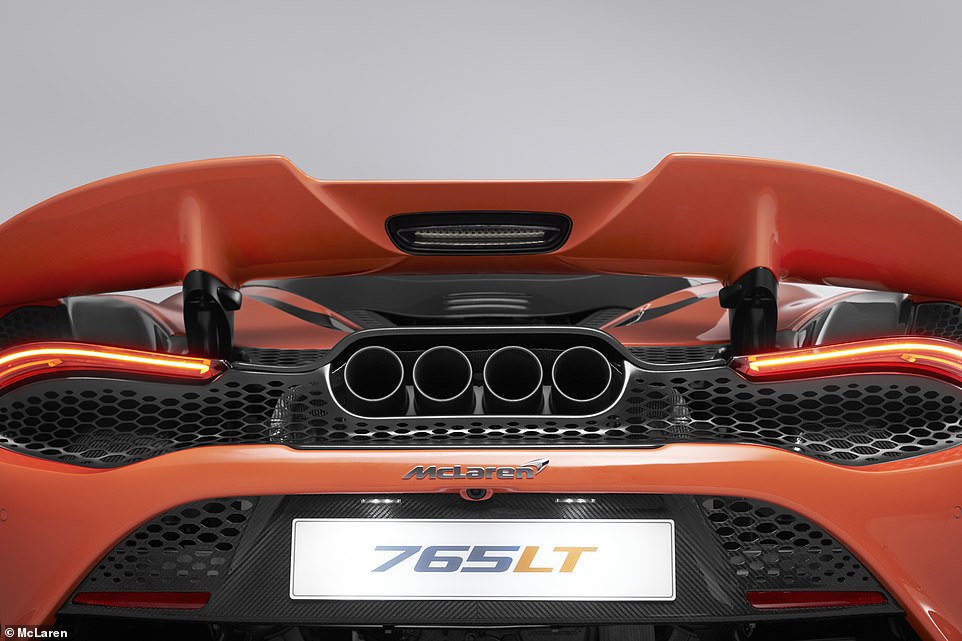 McLaren said it had given an ‘absolute focus’ to reducing weight, achieved largely but not exclusively, by extensive use inside and out of lightweight carbon-fibre materials and body components, now produced at its own new in-house facility near Sheffield.

Even the licence-plate holder is lightweight carbon-fibre.

This means the 765LT is lighter by 80kg – about the weight of the average male – than its own super-lightweight 720S coupe and at least 50kg lighter than its three main rivals, rising to nearly 300kg (296kg to be exact) in the case of the Lamborghini.

McLaren 765LT: Will it fit in my garage?

Examples to be produced: 765

The new Longtail car is also 57mm longer thanks to the nose being lengthened by 48mm and the active rear wing stretched rearwards by an additional 9mm.

Among the specific weight-saving measures is a four-quad titanium exhaust-pipe system of just 10.9kg which is a 40 per cent less than a comparable steel version, and Formula 1 grade lightweight materials used for the first time in the transmission.

Weight is also shed thanks to a thinner glass windscreen and side windows and motor-sport-style polycarbonate glazing.

There’s also the option of a double-glazed panel integrated within the carbon fibre rear upper structure to showcase the powerful McLaren V8 engine.

McLaren says the combination of the weight saving, boosted power output, and ‘hundreds of detailed engineering changes’ means improved driver engagement on road and track, a better connection with the powertrain through both the structure and the acoustics.

The four aggressive-looking full-titanium quad exhaust pipes deliver a ‘searing soundtrack’ according to McLaren, though that will have to be properly tested on tarmac.

But it promises that you really will be able to feel the car’s exhaust note in the seat of your pants: ‘Every change in RPM [engine rev] is amplified, not only to occupants’ ears but also as a feeling through the seats because low frequency sounds can be both heard and felt.’

The new LT’s aerodynamic package – all in carbon fibre – helps the supercar slice through the air while remaining glued to the road and encompasses the front splitter, front bumper, front floor, side skirts, rear bumper, rear diffuser and the larger active rear wing.

The aerodynamic downforce is 25 per cent greater than on the 720S, says McLaren.

To improve handling, grip and balance at high speed, the new car’s chassis dynamics have been enhanced with bespoke springs and dampers; increased (6mm) front track width; a lower (5mm) front ride-height, and a unique software programme to control suspension. 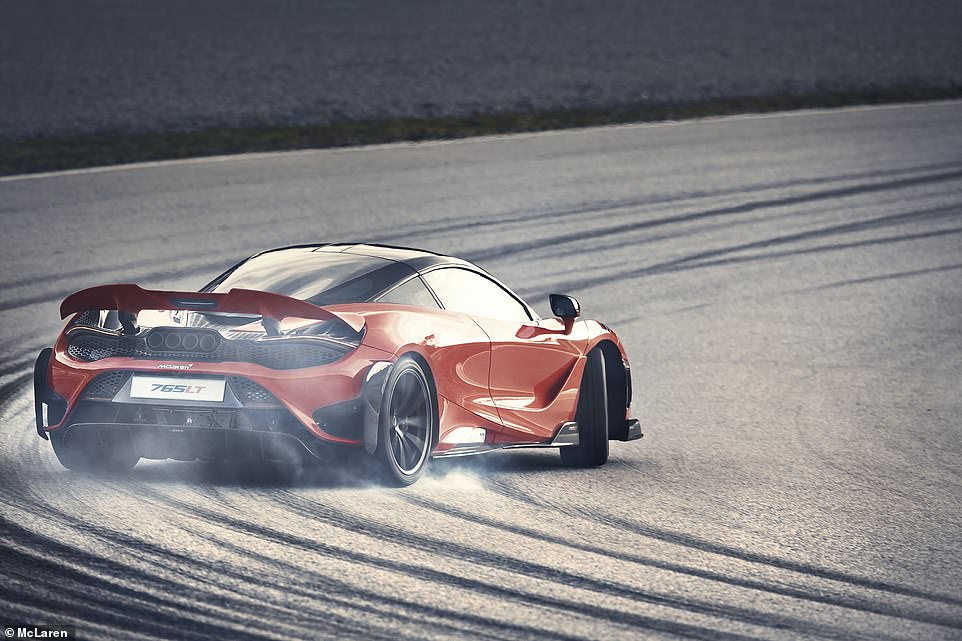 McLaren says it will out-sprint Continental rivals, including the Ferrari 488 Pista. It will also be on a par with a Lamborghini Aventador SVJ and Porsche 911 GT2 RS 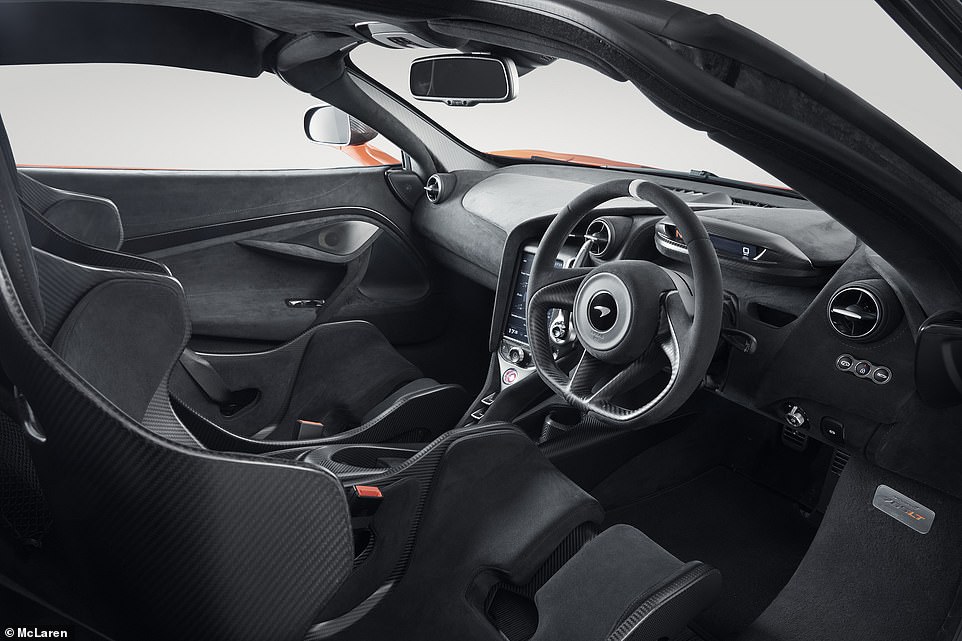 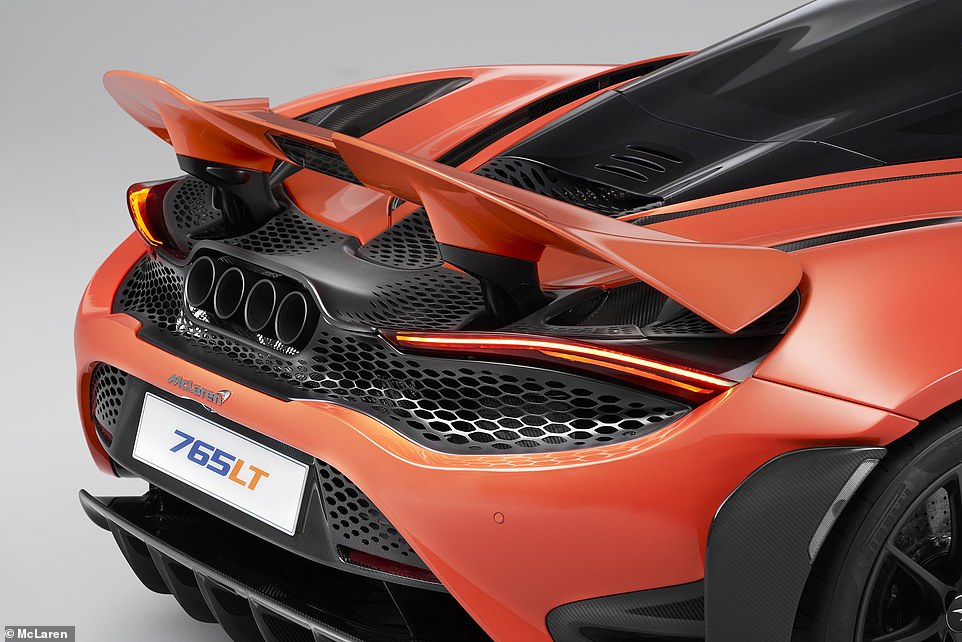 The four aggressive-looking full-titanium quad exhaust pipes deliver a ‘searing soundtrack’ according to McLaren, though that will have to be properly tested on tarmac

The car rides on 10-spoke ultra-lightweight forged alloy wheels – 19 inches at the front and 20 inches at the rear – with titanium wheel bolts and bespoke Pirelli P Zero Trofeo R tyres as standard.

To enable the car to stop from high speed as effectively as it accelerates, the car’s equipped with carbon-ceramic discs, callipers from the McLaren Senna, plus F1-borrowed integrated calliper cooling ducts.

To reduce weight to a spartan degree there is no air-conditioning or audio system as standard though these can be specified at no additional cost.

There’s also no carpet and stowage nets in the door replace heavier hinged door pockets, but owners who prize luxury over extreme performance can specify their full choice of extra comforts including soft-grain leather and hi-end hi-fis.

‘Incredible performance and astonishing levels of driver engagement are the result of hundreds of detailed engineering actions undertaken to ensure the purest possible connection between driver and car.’ 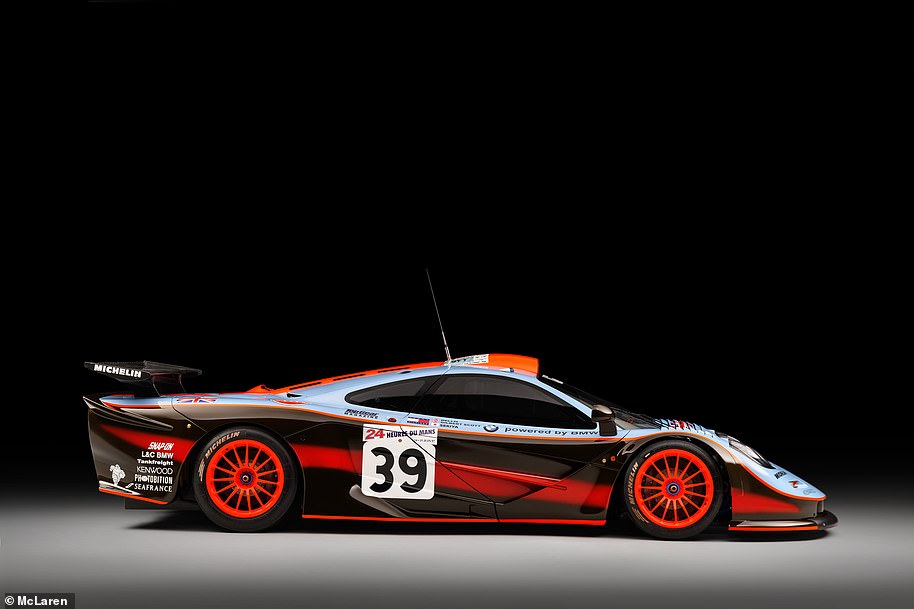 The McLaren Longtail story began in 1997 with the McLaren F1 GTR Longtail, which competed successfully that year in the FIA GT Championship.

McLaren Automotive revived the Longtail name in 2015, with the launch of the 675LT Coupé, a limited-volume model that rapidly sold out.

A 675LT Spider followed with all 500 examples sold within two weeks.

The fourth model to bear the ‘Longtail’ name, the 600LT Coupé, was revealed in July 2018 at the Goodwood Festival of Speed followed the next year by a Spider version.

Marking the next chapter, the new 765LT is therefore the sixth McLaren to bear the Longtail LT name. 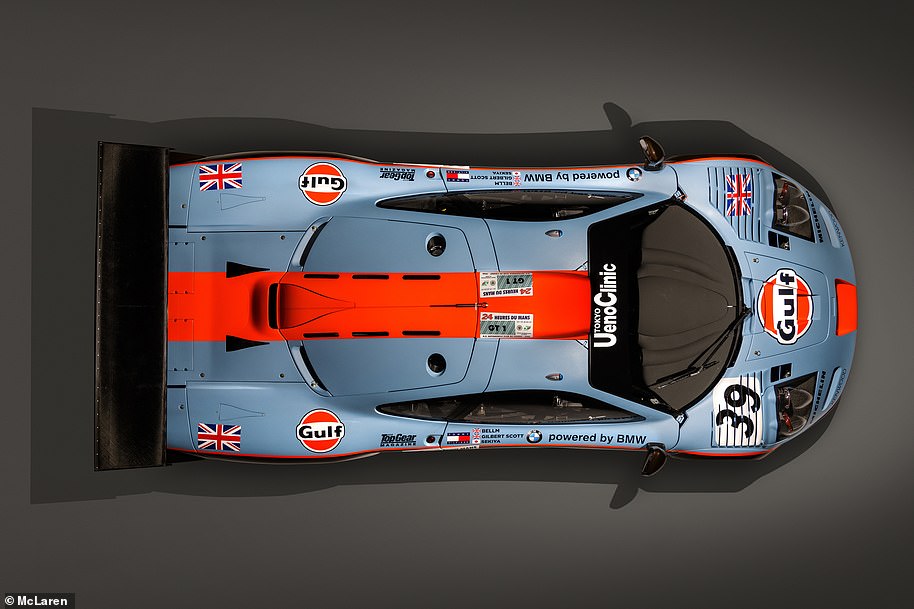 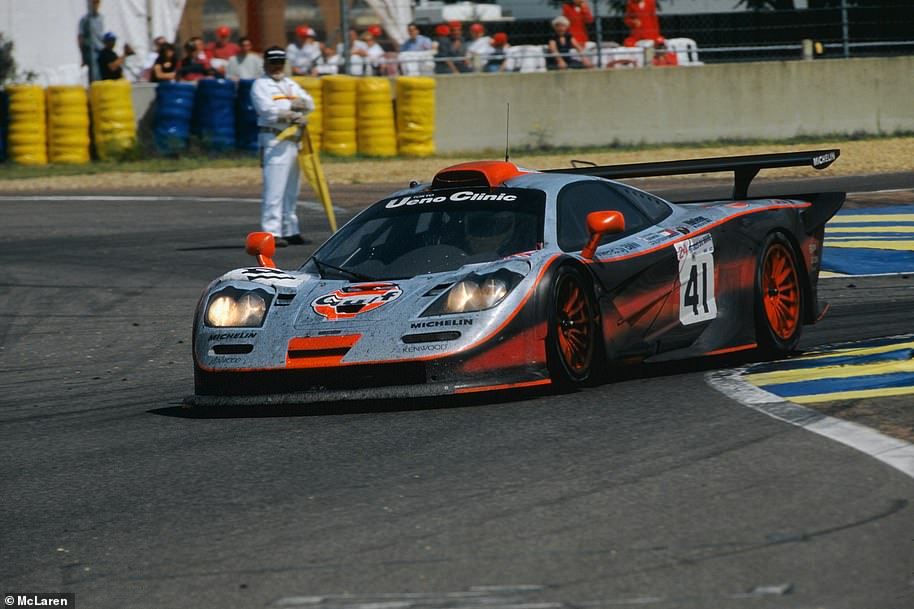