Following months of turbulent trading, NMC Health, Tui and Kingfisher are all set to lose their spots on the prestigious FTSE 100.

They will be expelled from the blue-chip index this month in the next reshuffle, which is based on last night’s prices.

NMC Health, Tui and Kingfisher are all set to lose their spots on the prestigious FTSE 100. They will be expelled from the blue-chip index this month in the next reshuffle

NMC has had a stunning fall from grace, losing around two-thirds of its value following questions raised by US short-seller Muddy Waters about the private hospital group’s financial health.

Companies already in the FTSE 100 must at least be in the 110 biggest firms on the London Stock Exchange’s Main Market to stay, while a company can be promoted if it rises to 90th place or higher.

NMC shares, which are suspended from trading, were worth 938.4p last night, valuing it at £2billion and making it, roughly, the 176th biggest firm.

The travel group has shed around a third of its value as a result of coronavirus fears pummelling tourism stocks. 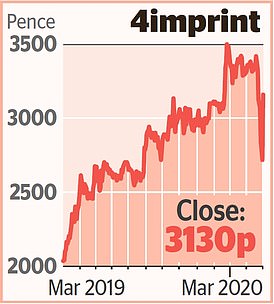 Business boomed in the US last year for promotional products maker 4imprint.

It sells pens, bags and other wares that can be customised with a company’s name and branding on items such as freebies often found at conferences.

The retailer has not fallen enough to be automatically demoted but it will be pushed out by the strong performance of three companies on the FTSE 250: gambling firm GVC, up 1.3 per cent, or 10p, to 802.6p yesterday, utilities group Pennon, which climbed 2.8 per cent, or 30.5p, to 1140.5p and Intermediate Capital Group, 3.9 per cent, or 63p, higher at 1667p. These stocks have grown so much that they have automatically qualified to be promoted.

It will be another major blow for the retail sector, which lost Marks & Spencer, up 4.1 per cent, or 6.45p, to 163.80p, two reshuffles ago in September after being a constituent of the index since its inception in 1984. The shake-up comes into effect on March 23.

Easyjet is tipped to be the UK airline worst-affected by Covid-19. Analysts believe the hit will be temporary for London’s four listed carriers and kept their ‘buy’ ratings on all four.

Builders merchant and Wickes-owner Travis Perkins edged 1.9 per cent higher, up 28p, to 1472.5p, as it shrugged off a ‘challenging’ market and swung back into the black last year.

A recovery at Wickes comes as Travis Perkins closes in on spinning off the business.

Industrial equipment rental group Ashtead said a 13 per cent rise in revenue over the first nine months of its financial year was driven by growth in the US.

Gambling software group GAN jumped 15.4 per cent, or 22p, to 165p after it filed documents that draw it closer to listing on the Nasdaq exchange in New York.

And ex-chief executive of Amigo Holdings, Glen Crawford, has snapped up shares worth around £1.2million, shoring up investor confidence in the guarantor lender. It rose 2.4 per cent, or 0.9p, to 39.1p.