My partner and I booked a short break in New York from December 15 to 20 to celebrate my 50th birthday.

At the beginning of August, my son, who was 15 at the time, was diagnosed with stage 4 Hodgkin lymphoma blood cancer. He had been misdiagnosed by our surgery for almost five years.

We had to cancel our summer holiday to Malaga. Ryanair was brilliant and refunded our money without quibble.

Our New York holiday was booked via lastminute.com on Virgin and Delta flights. At the time I cancelled, I had paid a £395 deposit, but a further £1,185 was taken from my account four days afterwards.

I have provided all the evidence requested, including a letter from my son’s specialist, but I’ve heard nothing from lastminute.com.

We were planning to take out travel insurance before the trip but had not done so at the time of the diagnosis. I need this money back to help care for my son.

I first contacted lastminute.com, which confirmed the hotel booking would be refunded but said: ‘Virgin’s position is that the refund is not possible as ultimately this is an insurance claim.’

It added: ‘Unfortunately, there are no guarantees in terms of cancellations based on medical conditions or emergencies.

‘We always make every effort to help our customers in these cases. However, we are bound by the rules of our suppliers.’

It said that only the taxes from the flights would be refunded.

Overall, I did not find the firm particularly helpful. Its press office would communicate only by email and my requests for a phone conversation to discuss the issue further were ignored.

So I went directly to Virgin. There was an initial delay which transpired to be a result of its email system blocking the information I was sending through, which included scans of your supporting documents.

However, once Virgin was aware of the severity of the case, it acted swiftly and agreed to a full refund of the outstanding £572.

It has also sent its sincere apologies that this was not sorted out sooner. A spokesman says: ‘Virgin Atlantic and Delta Air Lines are extremely sorry to hear about your son’s illness and we send our thoughts and best wishes to him and the family.

‘Our customers are at the heart of everything we do and we regret the delay in refunding the family’s booking.’

Why your refund was initially turned down remains a mystery, but this does suggest that it can be far better to book directly with an airline than via a third party.

You and your partner can now concentrate on supporting your son. My very best wishes to all of you for the coming year.

As a final note to all those reading this, please buy your travel insurance on the same day or very soon after booking your holiday. It’s not enough to wait until a week or so before travelling — you need cover in case you are forced to cancel by cruel circumstances such as these. 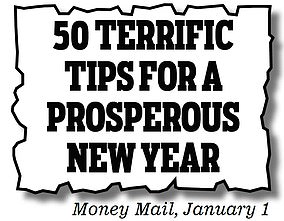 Every  week, Money Mail receives hundreds of your letters and emails about our stories. Here are some responding to our tips on how to make the most of your money in 2020:

I’ve already started saving money this year. My home insurance quote arrived and just one phone call cut 25 per cent off my premium.

I do the same thing every time I get a renewal quote. Always pick up the phone.

Never, ever make any financial decisions on the basis of what you’ve been told by a cold-caller.

More often than not, these people are after one thing and one thing only: your money.

Always remember to keep your receipts. I work in retail and there was once a time when we would exchange anything at this time of year.

Not any more. No receipt usually means no exchange — and certainly no refund.

Taking pictures of your valuables is a great idea. I’ve photographed bikes, jewellery, tools and even make-up.

Their values can add up to a significant sum if you ever need to make a claim on your contents policy.

I never pick up incoming calls from people I don’t know. If someone needs to speak to you, they will leave a voicemail message.

So many people use your phone as a route to your bank account nowadays.

Whenever I see something I want to buy, I always walk away and think about it first. Do your research and you may find the same thing for a lower price.

Spend only 50 per cent of what you earn and save the rest. If you have a mortgage, overpay as much as you can.

If you don’t have a mortgage, save for a deposit. Don’t follow fashions and do be cynical when shopping in the sales.

My son was given a Disney share for his Christening in 2010. Since then, we have received small cheques for dividend payments of various amounts, most recently $0.62 in July.

We have never banked these as they are for such small amounts and because my child’s bank, Nationwide, said it could not accept cheques in dollars.

We were contacted by Broadridge last year to check whether the account was still active.

We confirmed that it was and explained the reason for not depositing the cheques. It said it could only issue cheques in dollars and cannot transfer money electronically outside the U.S. We feel stuck. Would it be easier to sell the share?

It seems the gift was purchased as a direct holding via Broadridge, a US based financial company which runs an investment plan for Walt Disney shares, so it is probably your best port of call if you decide you do wish to sell it.

Andy Parsons, head of investments and product proposition at The Share Centre, says that, usually, US listed shares can be bought via a traditional investment account with any dividend received being paid in sterling after the reduction of the appropriate tax.

‘Purchasing a share through this route means the holding is normally acquired in a format known as Crest Depository Interest (CDI), which allows a straightforward and cost-effective way to trade overseas.’

Mr Parsons says that, unfortunately, it is not possible to request a change from a direct holding to that of CDI.

‘The investment would need to be sold, thereby incurring costs, and then repurchased as a CDI, incurring further costs.

‘Any US holding acquired through an account with a UK stockbroker will require the customer/holder to complete a W-8BEN form as an official record for the US Internal Revenue Service,’ he says.

Hargreaves Lansdown’s Danny Cox concurs: ‘UK stockbrokers don’t have easy ways to help. You’ll need a specialist broker to deal with the certificate, and even then the stamping process could be a considerable proportion of the value of the share.

‘One option would be to donate the share to ShareGift (sharegift.org), which should be able to cash it in for you and donate the value to charity.’

This wouldn’t solve the problem of how to have your son benefit from the gift, but hopefully will help a charity and reduce the headache for you, he adds.

Straight to the point

My old energy provider, One Select, went bust in December 2018 and I was transferred to Together Energy.

I then switched to a different firm, but am unable to get a final bill. Together Energy has now taken £348.69 from my account. I was £100 in credit with One Select, so why have I been charged so much?

Together Energy says it is extremely sorry. The £348.69 figure was calculated using estimated readings before it received the correct figures from your new supplier. You now have an accurate bill and have been refunded £429.63.

When my TV cut out, my provider, Virgin Media, promised to send an engineer within two days to replace the box. I am 82. How can my TV just be cut off like this?

Virgin Media says it did not purposely cut off your TV service — a fault had caused the set-top box to stop working.

After I alerted the firm to your complaint, it arranged for an area manager to visit your home to resolve the problem the following morning.

On September 18, I ordered a stamp album from eBay for £9.95. The money was taken from my bank by PayPal and I was promised delivery by September 21.

But, despite contacting the seller, PayPal and eBay on several occasions, I have still not received the item or a refund.

Ebay confirms there is no tracking data from the seller, but it was unable to give you a refund because you did not escalate the case within 30 days.

However, PayPal has agreed to refund your purchase, along with a goodwill payment of £25.

In July, I cancelled my gym membership with Xercise4Less and received an email confirming this.

But, a few months later, I was told I owed £92.99. When I called I was told the membership had not been cancelled after all, and the email had been sent by mistake.

Xercise4Less has agreed to clear the charges but will not explain what happened, citing data protection rules. This is frustrating, but at least the matter is resolved.