Soaring numbers of parents and grandparents are raiding the equity in their homes to help younger relatives get on the property ladder.

Estate agents and mortgage brokers have told Money Mail they are hearing from more and more buyers who are able to put down a deposit on their first home only because an older family member has unlocked cash from their own property.

Equity release allows homeowners aged 55 and over to borrow money against the value of their home without having to sell it, or make any repayments until they die or move into long-term care. But the interest charges can be punitive, causing the average debt to double or even triple over 25 years.

The ‘Bank of Mum and Dad’ is set to help some 260,000 loved ones buy a home this year, according to research by Legal & General.

As we reported yesterday, some parents say they feel so under pressure to help, they are dipping into pension savings — putting their retirement plans at risk.

But experts are also warning about the increasing numbers of parents and grandparents draining their property wealth in order to gift loved ones a deposit.

Around one in six now say they have, or would, release equity from their property to help loved ones buy a house, according to Legal & General’s report.

Over-50s financial adviser Age Partnership has also reported a rise in the number of parents gifting property equity to loved ones, from 6 per cent in the first six months of 2014, to 9 per cent over the same period in 2019.

One industry insider told Money Mail that increasing numbers of mortgage brokers are now even having extra training to become equity release specialists, so common has it become for first-time buyers to use their parents’ housing wealth to help them buy a home.

Jeremy Leaf, an estate agent in North London, says: ‘I am increasingly hearing talk from first-time buyers and their parents about using property wealth for a deposit, as house prices have risen and buying a home has become a remote possibility for many.

‘Those parents who have benefited from a house price boom want to pass on their good fortune, but it is really disappointing that so many are resorting to this.

‘They need to take serious financial advice before making this decision.’

In recent months, equity release rates have fallen to record lows, with some deals available at less than 3 per cent.

Even so, your debt can still increase significantly over time, thanks to compound interest. This is where the interest is added to your debt each month, so you end up being charged interest on interest.

It means that if you take out an equity release loan too early, you could end up with no inheritance to leave your loved ones.

By comparison, if you were 75 years of age when you released the cash, the total cost of the debt would be £54,298 by the time you turned 85. 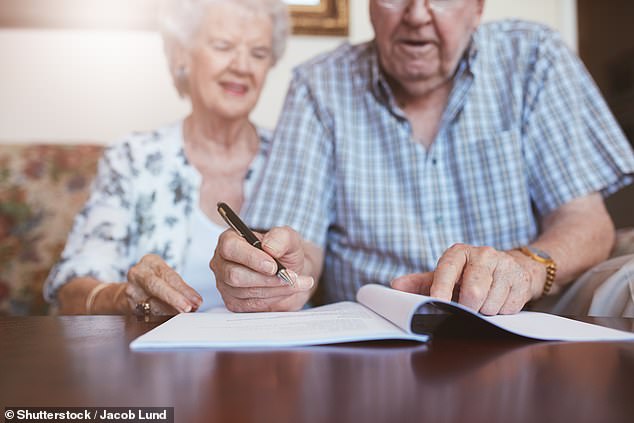 Around one in six parents and grandparents now say they have, or would, release equity from their property to help loved ones buy a house, according to Legal & General’s report

If you take out a large loan in relation to the value of your property, your rate is likely be higher, causing your debt to grow even faster. At 4 per cent, the debt would rise to £135,343 after 30 years. At 6 per cent, it would be around seven times the original debt at £283,875.

Keith, a retired courier driver, took out an equity release loan two months ago in order to gift his daughter, Georgina, £30,000 to buy her first flat in Watford.

‘It was quite a big decision and I thought about it for a while. But, in the end, I thought: “She’s my daughter and she can’t do this without my help.” ’ Keith released £80,000 from his home and, after giving Georgina, 23, money to buy a flat and pay off her £5,000 student loan, he is planning to spend the remaining cash renovating his house.

How much can you release?

Like mortgages, equity release loans are offered up to set loan-to-values – the size of the loan as a percentage of your property’s value.

However, equity release is offered only up to a far lower loan-to-value than a traditional mortgage. This is because interest is not paid off on the loan and instead rolls up, meaning the amount to be repaid increases over time.

Equity release providers should guarantee that you will never have to repay more than the value of your property.

This equity release calculator  can help you understand what you could borrow.

Equity release specialist Andy Wilson, of Andy Wilson Financial Services, is urging more families to prevent equity release debt from spiralling by selecting a deal where you repay the interest each month.

He says he recently arranged two loans where children used money from their parents’ property to boost their deposit in order to get a cheaper mortgage rate. They then covered the cost of the monthly interest payments on the equity release loan so that they did not eat further into the value of their parents’ home.

Even then, it worked out cheaper than what they would pay had they taken out a 95 per cent mortgage, where rates are far higher.

Mr Wilson says: ‘Equity release is increasingly popular, particularly among parents who want to gift money to their children to use as a house deposit. I expect this trend to continue.

‘However, I would like to see more families repay the interest on equity release loans like this. It means that Mum and Dad can still protect their equity for costs such as care fees, and the children are likely to get a better inheritance.

‘But I strongly urge caution for younger borrowers looking to take a roll-up mortgage.’

If parents want to help their children without taking out a loan, several lenders offer family support mortgages.

Barclays and Lloyds offer mortgages allowing parents to deposit savings in an account attached to the first-time buyer’s mortgage.

The cash is held as security while earning interest and returned after five years with Barclays or three with Lloyds. The borrower does not need to put down any deposit.