The disgraced former boss of Uber stands to make as much as £6.6billion from the taxi app firm’s blockbuster float.

Travis Kalanick owns 8.6 per cent of the shares and will be one of the biggest winners in its £76.5billion listing on New York’s stock exchange.

Also in the money is fellow founder Garrett Camp, who could make £4.6billion, and investors such as Softbank and Google, which have large holdings.

In the money: Travis Kalanick with ex-girlfriend Gabi Holzwarth

The proposed float comes just weeks after smaller rival Lyft listed in New York with a value of £15.7billion. Its shares have tumbled 18 per cent leaving it valued at £12.9billion.

Uber has warned the legacy of scandals from Kalanick’s time as boss could still damage its global ambitions amid fears it may never make a profit.

During his time as chief executive, the 42-year-old was accused of presiding over an aggressive ‘tech bro’ culture behind sexual harassment claims against managers, a trade secrets dispute with Google and staff snooping on customers.

In its prospectus to investors, Uber warned a ‘failure to rehabilitate our brand’ would cause the business to suffer. It also revealed it had made a £2.3billion loss last year and admitted it may never become profitable. 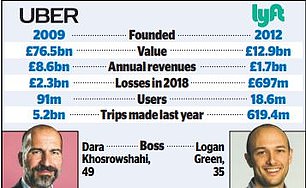 He said: ‘You can’t knock what Uber’s achieved in such a short space of time, but it still looks like a risky ride for investors.

‘Companies which are yet to break even always sit towards the speculative end of the investment spectrum, and for Uber the risk is amplified by the regulatory backlash it’s facing.’

If Uber’s float on New York’s stock exchange goes well, Kalanick will become one of the world’s 200 richest people overnight.

The bonanza would mark the latest twist in his rise, which has seen him build Uber into a global behemoth before he was acrimoniously ousted in 2017.

Kalanick was previously seen as a hero of Silicon Valley after founding the business in 2009, with the entrepreneur praised for modernising the taxi industry for the age of the smartphone. 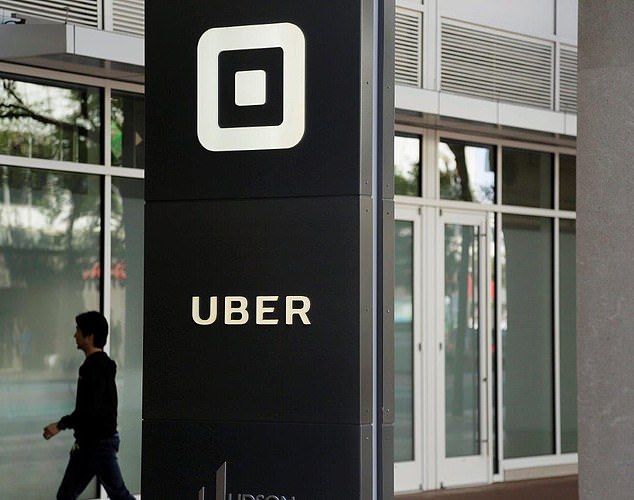 But Uber and Kalanick were soon buffeted by a string of controversies which critics say sprung from the company’s culture.

It was criticised for its treatment of female staff after a string of harassment claims, with Uber staff also accused of using tracking features on the firm’s app to snoop on famous people and ex-partners. It became embroiled in battles with regulators around the world over its fast expansion, with Transport for London at one point threatening to ban it from operating in the city.

At the same time, it faced a court battle with Google-owned Waymo over its alleged theft of driverless car technology and tribunal hearings with drivers who disputed its treatment of them as freelancers and not full staff.

Under mounting criticism and pressure from investors, Kalanick resigned in June 2017.

He was replaced by former Expedia boss Dara Khosrowshahi who has led a campaign to clean up Uber’s image. However, he has remained a board member and advisor. Uber said repairing its reputation was ‘critical to our business prospects’.