By This Is Money

Sainsbury’s has revealed it saw lower sales over the Christmas quarter as a tough toy market’s toll on Argos offset growth in its core groceries business.

The group said like-for-like retail sales fell 0.7 per cent, excluding fuel, in the 15 weeks to 4 January.

Sales of groceries rose 0.4 per cent and online groceries trading lifted 7.3 per cent, while clothing jumped 4.4 per cent, but overall performance was dragged lower by a 3.9 per cent fall in general merchandise sales.

It cautioned that trading is set to remain ‘highly competitive and promotional’ in 2020, with ongoing consumer uncertainty also clouding the outlook.

Chief executive Mike Coupe put a positive spin on the situation. ‘We have a real sense of momentum in Sainsbury’s and investment in our stores and improvements to service and availability have led to our highest customer satisfaction scores of the year,’ he said.

‘Our digital investments are also paying off and over 20 per cent of our business was online in the quarter. Groceries Online had record order numbers throughout the Christmas period and customers are increasingly choosing to shop with SmartShop in our supermarkets.

‘Argos had its biggest digital Black Friday to date and record sales through mobile and via Argos Click and Collect. 32 million customers shopped with us across Sainsbury’s and Argos in the key Christmas week.’ Coupe added.

The Sainsbury’s figures may be down on the previous quarter, but mark an improvement on the 1.1 per cent fall seen over its Christmas quarter last year.

It comes after Morrisons on Tuesday bemoaned ‘unusually challenging’ trading as it posted a 1.7 per cent sales fall for the 22 weeks to 5 January. 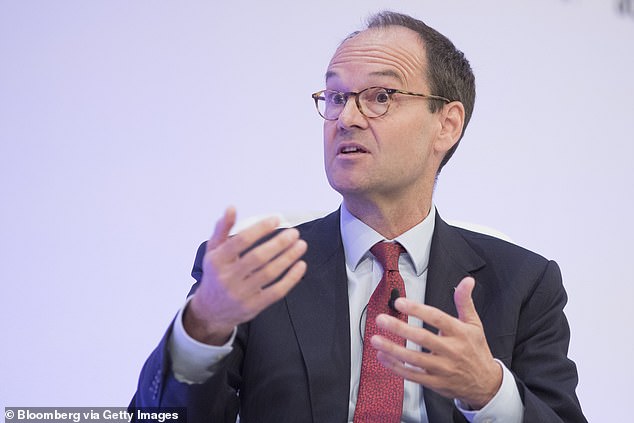 AJ Bell’s Russ Mould commented: ‘Looking at this update from Sainsbury’s you might be left asking if the Grinch had stolen Christmas, as weaker sales of toys and video games at Argos proved a drag on sales.

‘The brighter news is that people don’t seem to have given up on eating and drinking over the festive period and grocery sales actually nudged ahead in a very tough market.

‘In what amounts to a contest to be the best of a bad bunch, industry data shows Sainsbury’s performed least worst out of the ‘big four’ groceries firms during Christmas.

‘This represents something of a turnaround. Since acquiring Argos in 2016, the catalogue retailer has often come to the rescue of Sainsbury’s struggling supermarket operation.

‘The market will therefore hope the recent weak performance at Argos genuinely reflects the one-off factors flagged by CEO Mike Coupe, like the lack of a big gaming release, and not something more troubling with the acquisition.’