Parents have virtually no understanding that they could end up with a smaller state pension if they fail to fill in a child benefit form, according to government research.

One mum described herself as ‘gutted’ when she realised she had missed out on valuable credits towards her pension, while others admitted they didn’t see the point in filling in a form for child benefit when they weren’t entitled to get payments.

This is Money is campaigning against the unfairness of parents – mostly mums – ending up tens of thousands of pounds worse off in retirement due to innocent paperwork errors.

Meanwhile, the taxman has refunded or dropped fines on 6,000 families for not notifying it of income changes that disqualified them from receiving child benefit.

Confusion over rules: Parents have virtually no understanding that they could end up with a smaller state pension if they fail to fill in a child benefit form

Consumer research carried out for HMRC last year, but only just published, confirms that parents are almost entirely in the dark about the link between claiming child benefit and their eventual state pension.

The findings informed HMRC’s revamp of child benefit forms – see the old and new versions below.

Researchers found that people liked its new flow chart and found it helpful in deciding what to do.

But HMRC admitted it had only interviewed mums, saying: ‘Only expectant mothers (not fathers) were included because we found they were more engaged with the child benefit claim process.’

This is despite many fathers filling in the forms, often to take the pressure off partners after children are born.

Since we began our campaign, about as many concerned dads as mums have contacted This is Money – though, this is because their spouses – rather than they – have lost state pension credits.

Much of the confusion stems from a controversial overhaul of child benefit in 2013, which reduced the entitlement for those earning £50,000-plus a year or wiped it out entirely for those earning £60,000-plus – something officially known as the High Income Child Benefit Charge.

What do mums say about child benefit forms (no dads were asked)?

‘I thought I’m not taking time out, when I’m a brand new mum, with a brand new baby, to fill out a form that I wasn’t going to get any benefit from.’

‘I’m just glad that the lady that brought the pack round did take it [the form] out of the pack and pointed it out to me. I just assumed that if you were both earning sort of decent salaries you weren’t entitled to anything, with the word benefit in it. I just thought it was for low incomes or single mothers or something’

‘I just thought it was too much hassle and, for what I was entitled to it, it was not worthwhile’

But parents who earn too much to qualify for child benefit still have to apply for it so that they receive state pension credits.

People who earn less and do qualify for child benefit are also losing state pension because it is easy to make a mistake.

A common problem is when the ‘wrong’ partner signs up for child benefit, because they are working so the credits are worthless to them.

Webb, who is now director of policy at Royal London, said: ‘HMRC’s own research shows that people are completely baffled by the link between the High Income Child Benefit Charge and their future state pension.

‘People are turning down child benefit without realising they are throwing away valuable National Insurance credits towards their pension.

‘Expecting people to claim a benefit in order to get National Insurance credits but then to turn down the weekly benefit payment is utterly baffling to most people.

‘HMRC need to rethink this whole system and make sure that thousands of mothers do not continue to miss out on money which is rightly theirs.’

Morgan, who chairs the influential Treasury Committee of MPs, says: ‘The dire findings of HMRC’s research are not surprising, nor is the fact that it has had to refund HICBC penalties.

‘For almost a decade, the Treasury Committee has warned the Government about the baffling HICBC implementation.

‘This, coupled with confusing communications by Government and poor awareness of parents of young children of its impact, has inevitably led to trouble. It’s a shame they didn’t listen earlier.’

The research report says: ‘There were generally low levels of awareness and understanding of the non-monetary benefits of claiming child benefit.

Have you lost state pension by not signing up for child benefits or filling form in wrong?

If this has happened to you, contact [email protected] and tell us your story.

‘Respondents did not usually hold any understanding that a non-working parent will receive National Insurance credits towards their pension if they are the person claiming child benefit.

‘Only a few respondents were aware that making a child benefit claim meant their child would be allocated a National Insurance number automatically.’

HMRC has cancelled fines issued to 6,000 families for failing to notify it of income changes that meant they weren’t entitled to receive child benefit, and made refunds worth £1.8 million to those who had already paid them.

It reviewed 35,000 cases where a ‘failure to notify’ penalty had been sent, but reversed them when they decided customers may have a ‘reasonable excuse’.

Families have complained of being hounded by the taxman for thousands of pounds after accidentally breaking the complicated rules.

Our sister publication, Money Mail, reported on a case where a father of twins was hit with a bill for more than £6,000 for five years’ worth of child benefit, plus interest and penalty charges.

High earners who want to avoid filling in tax returns and paying back child benefit, but who still want the valuable state pension credits, can tick a box on the form that opts them out of receiving the payments but still signs them up for credits.

HMRC said: ‘A reasonable excuse is something that stopped someone from meeting a tax obligation that they took appropriate care to meet.

‘Refunds have been sent to families that claimed Child Benefit before HICBC was introduced, and where one partner’s income subsequently increased to over £50,000, and to families where the liability to HICBC arose in the 2013 to 2014, 2014 to 2015, or 2015 to 2016 tax years as a result of the formation of a new partnership.’

‘All customers entitled to a refund will now have received one and do not need to contact HMRC.’

HMRC added that it was improving child benefit forms, guidance and communications, setting out options to pay the charge or to claim child benefit but elect not to receive payments.

Flow chart: HMRC has added this to the first page of the child benefit form, to help parents understand the HICBC. See the full redesign and the old version of the form below.

Jon Greer, head of retirement policy at Quilter, said: ‘The introduction of changes to benefits and taxes inevitably leads to complication and confusion. It’s right that HMRC take stock after the fact and the £1.8 million in refunds to families is welcome.

‘However, the challenges around this complex system aren’t going anywhere.

‘At the moment high earners who don’t think child benefit is for them need to make sure they always complete the child benefit: claim form (CH2) to retain NI credits. That seems counterintuitive and is probably the last thing on their mind when dealing with a newborn.

‘Just to make things more confusing the 516,000 families who have opted out of the system are fine, so it’s just new parents who need to fill out the form.

‘The Government needs to simplify its system so busy parents don’t have to spend hours trying to understand needlessly convoluted benefit rules and so it’s encouraging to see they are looking at the system and improve communication.’

Becky O’Connor, personal finance specialist at Royal London, said: ‘The bulk refund of penalty charges is an unprecedented move by HMRC and was the right thing to do.

‘It is also an attempt to draw a line under complaints. However there are many more law-abiding parents who did not realise that they should have paid the charge and who have not had a refund. The way the charge was introduced was unfair and confusing and these refunds do not go far enough.’

How did This is Money suggest overhauling the child benefit form?

We condemned the ‘fuzzy language’ on child benefit forms when we launched our campaign, and proposed a far more forceful – and colourful – revamp than the one carried out by HMRC. We said:

‘The message is so easy to fix. HMRC should just issue a straight-up warning that you could lose state pension – not just child benefit – if you ignore the form.

How about putting this at the top instead:

WARNING: Failure to fill in this form could mean you get a lower state pension when you retire.

And put it in huge red letters, to make it stand out against all that bland green, and ensure sleep-deprived parents flipping through ‘coupons for nappies and nipple shields’ (as one exasperated mum described the contents of Bounty Packs to us) don’t miss this important document.

Ideally there should be a further prominent rider to deter the ‘wrong’ parent, who is already working and doesn’t need state pension credits, from putting their name on the form.

How about: A parent who is NOT working, and therefore isn’t already paying National Insurance contributions towards a state pension, should fill in this form. Failure to do this could mean you get a lower state pension in retirement.’

What did the old child benefit form look like? 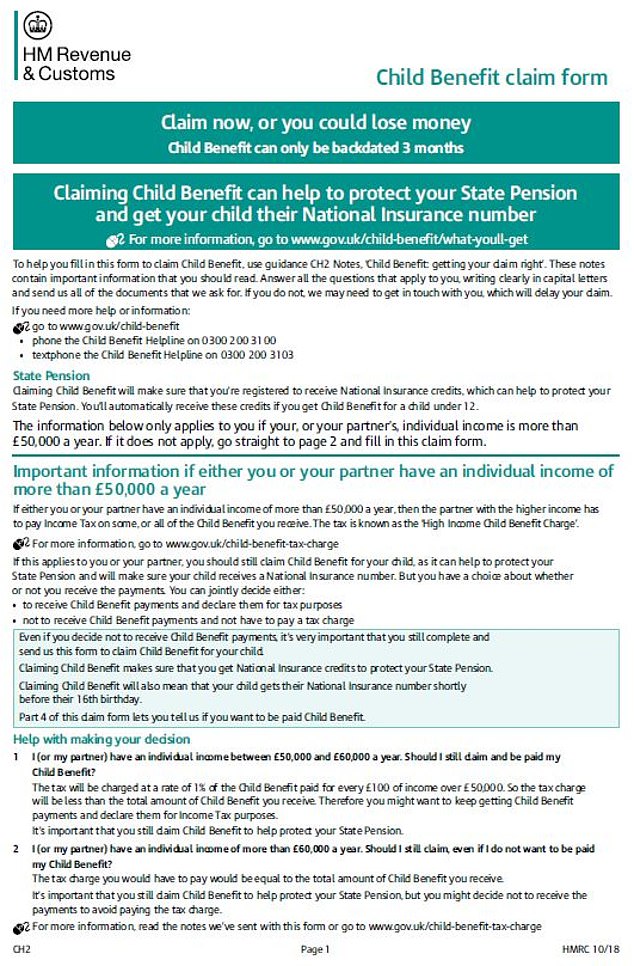 What does the child benefit form look like now? 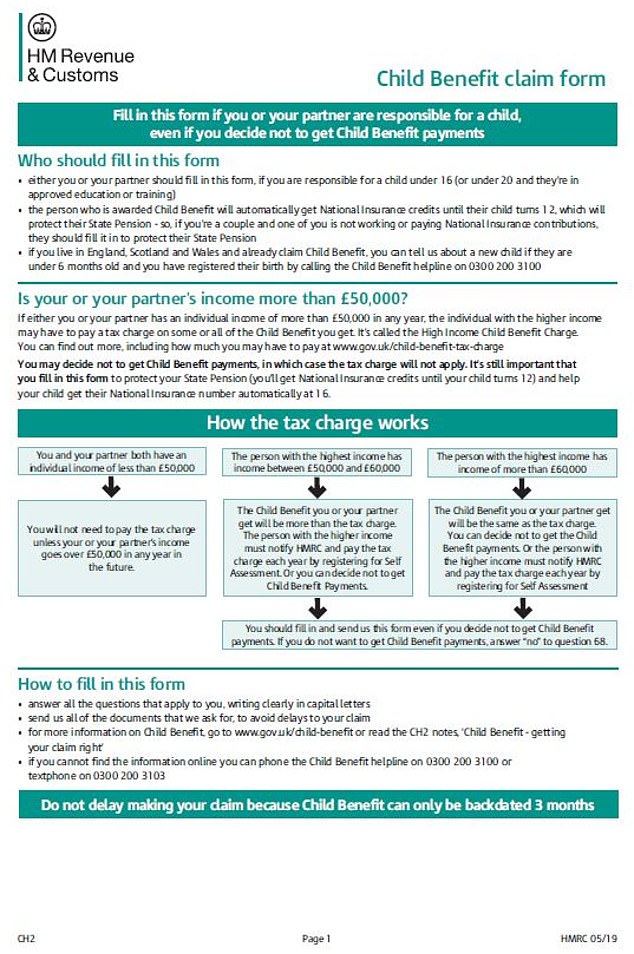