The uncovering of an elaborate scam sent shares in AIM-listed Lekoil crashing to an all-time low.

The oil company had been duped into believing it had secured a £142million loan from the Qatar Investment Authority, which it was going to put towards further drilling off the coast of Nigeria.

So sure was it that it had clinched the loan, it announced the deal to the stock market on January 2, causing shares to more than double.

AIM-listed oil firm Lekoil was duped into believing it had secured a £142m loan from the Qatar Investment Authority, which it was going to put towards further drilling off the coast of Nigeria

But it had actually been tricked into paying £462,000 to individuals based in the Bahamas at a company called Seawave, who were pretending to represent the sovereign wealth fund.

It took more than a week for the Qataris to confirm they had nothing to do with the loan.

Lekoil is now scrambling to find nearly £31million by next month or it could be forced to sell its stake in the same field it is trying to develop.

The deception comes as the UK’s former Africa minister under David Cameron, Mark Simmonds, joined as a non-executive director.

Lekoil’s shares were suspended on Monday when it revealed the scandal. But when they resumed trading yesterday they nosedived 73.4 per cent, or 6.9p, to 2.5p. 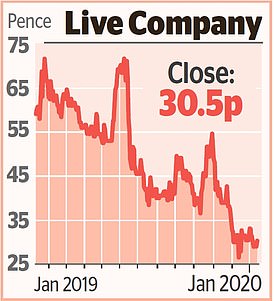 Live Company Group, which organises Lego-building events, was on the up after inking a three-year deal with Entertainment One.

This will give it the rights to use characters from the phenomenally successful cartoon series Peppa Pig in its Brick Live tours in the UK and Ireland.

It expects to launch the first Peppa Pig-themed tour, where under-12s take part in brick-building games and activities, later this year.

McBride had a bruising day after it warned profits will be around 15 per cent lower than expected this year.

The cleaning product maker, which supplies stores with things such as own-brand toilet bleach and air fresheners, said costs were going up as sales were falling.

It appointed a new chief executive, Ludwig de Mot, in November and is reviewing the business.

Bad news also struck FTSE 250-listed chemicals group Elementis, which put out a profit warning as trading in its chromium division stalled and its energy arm was hit by a slowdown in the US.

Fellow mid-cap firm Grafton, on the other hand, managed to rebound.

The company, which supplies building materials such as roofing and decorating equipment, said sales in November and December were better than expected and, even if trading in the UK was still subdued, it was better in the Netherlands and Ireland. Grafton shares rose 4.3 per cent, or 36.5p, to 894.5p.

There was a mixed reaction from Britain’s biggest bookies to news that punters will be banned from using credit cards to place bets.

The move is an attempt to curb problem gambling and will come into effect from April 14.

William Hill, which is more reliant on trading in the UK than many of its peers and could be knocked substantially by the new rules, fell 2.5 per cent, or 4.6p, to 181.4p.

Goldman Sachs took a liking to Dixons Carphone (up 3.9 per cent, or 5.4p, to 143.9p), moving the rating on its stock from ‘neutral’ to ‘buy’, based on the assumption that it will close the ‘large majority of its standalone Carphone Warehouse stores in the UK’.

Over on AIM, Audioboom, the podcast maker backed by property tycoon Nick Candy, said it had renewed the contract for one of its most popular downloads for another two years. Shares rose 2.2 per cent, or 5p, to 232.5p – even though it didn’t say which podcast it was.