Owner of Canary Wharf in £1.6bn talks to sell one of Britain’s oldest port companies

By Ben Harrington For The Mail On Sunday

The Canadian owner of Canary Wharf is weighing a sale of one of Britain’s oldest port companies for up to £1.6billion.

City sources said Brookfield has been talking to financial advisers with a view to appointing one to run a ‘strategic review’ of PD Ports.

PD Ports owns 13 UK shipping terminals, including those at Hull and Felixstowe.

The company traces its origins to a coal mining company founded by entrepreneur Thomas Powell in South Wales in the 19th Century.

PD Ports owns 13 UK shipping terminals, including those at Hull and Felixstowe (pictured)

It was originally called Powell Duffryn and was eventually amalgamated into the business empire of Sir George Elliot, a self-made coal mining businessman and engineer from Gateshead in Durham.

Brookfield – which bought Canary Wharf with the Qatar sovereign wealth fund for £2.6billion in 2015 – took control of PD Ports 11 years ago after it was bought and sold by several other financial investors including Babcock & Brown.

Bankers said PD Ports generates between £50million and £60million of operating profits so it could change hands for between £1.2billion and £1.6billion.

Despite uncertainty around Brexit, foreign pension funds and infrastructure, investors say they are interested in British port businesses as they represent stable long-term investments.

The move to offload PD Ports follows several other port company deals. The Public Sector Pension Investment Board, another Canadian fund, sold stakes in Forth Ports – owner of Grangemouth in the Firth of Forth – in 2018 to a group of pension funds.

Last month, Peel Ports – controlled by John Whittaker, the tycoon behind Manchester’s Trafford Centre – sold a 25 per cent shareholding to Australian Super, one of the country’s biggest pension funds. 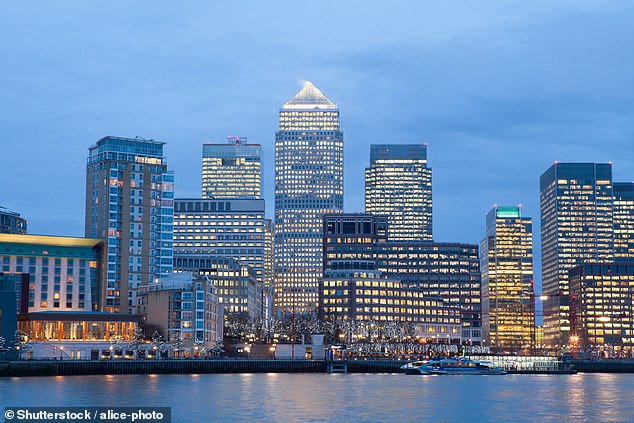 Brookfield bought Canary Wharf with the Qatar sovereign wealth fund for £2.6billion in 2015

Whittaker is looking to raise cash as one of the other companies in which he is a large shareholder – shopping centre group Intu Properties – is looking to tap shareholders for £1.3billion to shore up its finances.

He owns about a quarter of Intu and will have to support the emergency equity fundraising to alleviate the company’s £4.7billion debt burden.

Intu has faced difficulties due to the move to online shopping and weaker consumer spending.

Some of its biggest tenants – including retail chains Debenhams and House of Fraser, and Topshop owner Arcadia – have closed stores, requested rent reductions or gone through emergency restructurings.