HAMISH MCRAE: The coronavirus is a tough test for the global economy… but we’re resilient

By Hamish Mcrae For The Mail On Sunday

Bang. Something had to trigger the next global economic downturn, but we did not know what it would be. Now we do.

The coronavirus has already ended the bull market in equities, with share prices falling dramatically around the world. It will also trigger some sort of recession in the major economies, though how serious we cannot know until the epidemic is brought under control.

But we know something else. The more serious the downturn in markets, the stronger the recovery.

‘The coronavirus has ended the bull market in equities, with share prices falling dramatically around the world. It will also trigger some sort of recession in the major economies’

Being in America is interesting because until this week, the US has not been taking the coronavirus particularly seriously. It was China’s problem, maybe Italy’s, but the US felt secure. Now that has changed utterly. The crash on Wall Street has catapulted fighting the virus to the top of the political agenda.

Money talks, and in an election year it screams. Donald Trump knows he is deeply vulnerable, and has appointed Vice-President Mike Pence to head the fight. T

here are many reasons to criticise the administration’s initial response and the press conference given by Mike Pence with the President was uninspiring. But the US is bigger than the current administration and we can be sure that the full might of the world’s largest economy will be directed to tackling the threat.

That means a public health and medical response and let’s hope that this helps not just the US but the rest of the world too. But it also means an economic and financial response tackling not the virus, but the consequences of it on the global economy.

The deeper the downturn, the stronger the recovery

For this is an opportunity for the US to show that it can cope with a crisis better than its great rival, China – that an open democratic society can, for all its faults, handle a grave emergency better than a closed authoritarian one.

So what will happen? The most likely scenario is that the world will have a V-shaped recession. Activity will go down fast, and some of that activity will not be recovered.

Cancel the Geneva Motor Show – as was decided last week – and those hotels and restaurants that would have hosted the delegates cannot fill their rooms and tables with other people.

Service industries that rely on large groups of people gathering together will be particularly hard hit. That means that some of the weaker economies will go into recession. Italy is particularly vulnerable as it was barely growing before the virus struck. 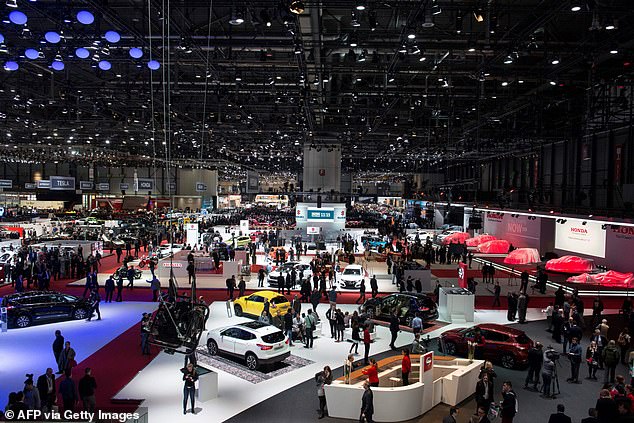 Cancelled: The Geneva Motor Show was cancelled due to the coronavirus

Germany is exposed because of its reliance on exports to China and will probably go into recession too. The US will be less affected at an overall level because of its relatively small exposure to foreign demand. Its domestic economy is so huge.

The UK may well scramble through without a recession, for if the past three years have taught us anything, it is that our economy is remarkably resilient to shocks, much more so than most economists predicted. And we will have a Budget this month that will give another boost.

So expect things to bounce back across the developed world by the autumn. The deeper the downturn, the stronger – or at least the longer – the recovery. Look at the experience post-2009. Yes, that recovery has been relatively muted, but it has gone on for more than a decade.

Expect too for there to be long-term implications for the way the world economy is organised. Is it really sensible for a company to be so dependent on importing components from China? Have global production chains become too complicated? Maybe we all should try to buy locally made produce when we can.

And the markets? Look, this does not feel good, but big shocks never do. Is this really worse than the stock market crash at the end of 1974? Or Black Friday on October 19, 1997, when the Dow Jones fell by 22 per cent? Or the chaos of 2008/9? This is a big one, but we have seen it all before – as indeed has Warren Buffett.