The social care system could collapse by 2029 unless the Government intervenes to prevent a funding crisis and a shortage of beds, says a new study.

Action is needed or a ‘tipping point’ will be reached where older people are unable to afford care, councils lack funding to look after them, and care homes don’t have enough room to meet demand, it warns.

The ‘Elderly Care Crisis’ report calls for an overhaul of funding, including raising the £23,250 wealth threshold at which financial support currently kicks in, to help elderly people struggling to pay massive care bills.

More accommodation needed: Report calls for the Government to require councils to plan and allocate land for retirement, care and nursing homes

Annual care fees averaged nearly £35,000 in for-profit residential homes and £48,000 in nursing homes in 2019-2020, according to the research from law firm Irwin Mitchell and the Centre for Economics and Business Research thinktank.

The Government has delayed a promised social care plan since 2017, but the Conservatives offered a ‘guarantee’ in the last election that no one needing care will have to sell their home to pay for it

They pledged to make an urgent attempt to build a cross-party consensus on funding, and while a deal is being sorted out they will earmark an extra £1billion of funding every year for more social care staff, better infrastructure, technology and facilities.

Six challenges are identified in the IM/CEBR report.

A lack of pension savings: Despite the launch of auto enrolment, workers need to save hundreds of pounds a month more in order to have enough to live on in retirement, let alone pay huge social care bills.

How is care paid for at present?

Under the current system someone’s assets – including the family home – is depleted down to £23,250 if they need to go into a care home.

If you need care in your own home, your assets must be depleted to a level set by your local council, which cannot be lower than £23,250, but your home is excluded from this means test.

UK workers need to save £799 a month into a pension over a lifetime to get a moderate standard of living when they retire, or about 26 per cent of average full-time earnings, according to Institute and Faculty of Actuaries research last year.

Average monthly pension savings are £225, leaving a shortfall of around £575. Meanwhile, savings of £1,755 a month are needed to achieve a comfortable, as opposed to moderate, standard of living in old age.

Reliance on friends and family: Many elderly people who need care are leaning on others for financial support.

Some 22 per cent of people have loved ones getting professional care, and about 18 per cent of them have helped to pay for it, according to a survey of UK adults by CEBR. Financial support averages £5,900, but some people have given more than £50,000.

‘If paying for care isn’t an option, and council funding for care is too difficult to access, people are caring for loved ones themselves,’ says the report. It cites official data that estimated the total value of informal unpaid care for adults at £59.5bn in 2016.

People in their 60s are most likely to provide unpaid care to friends or family, often while still working, with women more likely than men to do so. 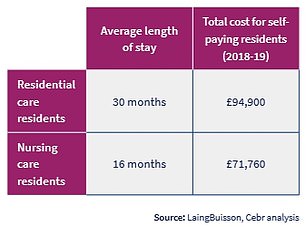 How much does it cost? Average length and cost of stay in residential or nursing home

The projected number of people aged 65 and over will rise to 12.6million in 2020, and to 15.4million in 2030, and the proportion of the population still of working age is expected to fall.

Shortage of elderly care accommodation: In March 2019, there was a total capacity of 463,000 beds and 393,000 people were living in residential or nursing homes, says the report.

Demand for and capacity of care homes has been ‘flatlining’ since around 2012, but the former is expected to grow and 480,000 beds are likely to be needed by 2030. If capacity stays the same, the UK will reach a shortage of supply by 2029.

Insufficient council funding and planning: A survey of all 329 local planning authorities in the UK to see if they had a policy to allocate where care homes should be located, or had earmarked specific sites for retirement, care or nursing home developments, found just 44 met both criteria.

Weekly and annual cost: Fees in for-profit homes, with public and private payers combined, in 2019-2020

Equity held up in homes: When older people’s homes are included as part of their wealth, the cost of care becomes more attainable, says the report.

They could release a significant amount of money by downsizing or moving into retirement accommodation, but many are very reluctant to sell even though they don’t need all of the space, and want care home fees to come from somewhere other than their estate so they can leave an inheritance to their children.

The report suggests better incentives like stamp duty tax breaks could convince elderly people to free up equity in their homes and provide a source of care funding, taking pressure off councils and family members. 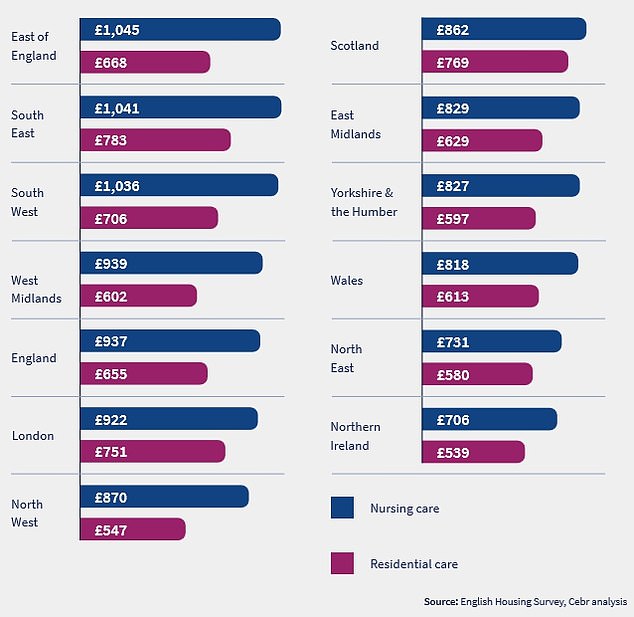 Across the regions: Weekly cost of residential and nursing homes

As well as changes to the care funding system, the IM/CEBR report calls for the Government to do more to support informal carers looking after elderly people, and to require councils to plan and allocate land for retirement, care and nursing homes.

A Department of Health and Social Care spokesperson responded: ‘Putting social care on a sustainable footing, where everyone is treated with dignity and respect, is one of the biggest challenges we face as a society, and we will be bringing forward a plan for social care this year.

‘We are providing councils with access to an additional £1.5bn for adults and children’s social care in 2020/21 to help meet rising demand and stabilise the social care system.’

The extra £1.5bn includes an additional £1bn of grant funding for adults and children’s social care. The Government is also proposing a 2 per cent council tax charge that will allow councils to raise a further £500million.

Kelly Greig, head of later life planning at Irwin Mitchell, says: ‘For years now we have been raising awareness of the impending care crisis the UK is facing. The fact that we now know the elderly care system will collapse at the end of this decade is a stark warning of what is to come. 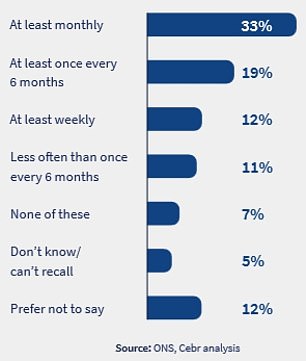 Support: How often do UK adults give money to loved ones needing care?

‘It’s now been 10 years since funding levels for social care were adequate, and the cracks are turning into chasms.

‘A decade on we have less people eligible for funding support, more families taking on unpaid labour to look after their elderly loved ones and workers needing to save unsustainable levels of money into their pensions just to afford care in later life.

‘We have a new majority government and the first post-Brexit budget coming up. While they have promised a cross-party solution we need a bold and fast-acting plan before it is too late.

‘The elderly care sector is already on its knees, and continuing to ignore the issue would be a disservice to the tens of millions of people that will be reaching old age in the next 20 years.’

‘Despite growing numbers of frail, older people in our society, neither central nor local Government has a sustainable plan to pay for care and there are no incentives for private individuals to set aside funds to meet later life care needs.

‘Pensions are designed to support independent living, not the sharply higher costs of care. This important report uncovers many of the consequences.

‘There are many aspects to this massive policy failure, which has been left unaddressed by successive Governments for so long that there is no silver bullet solution.’

How much do councils in England spend on care? 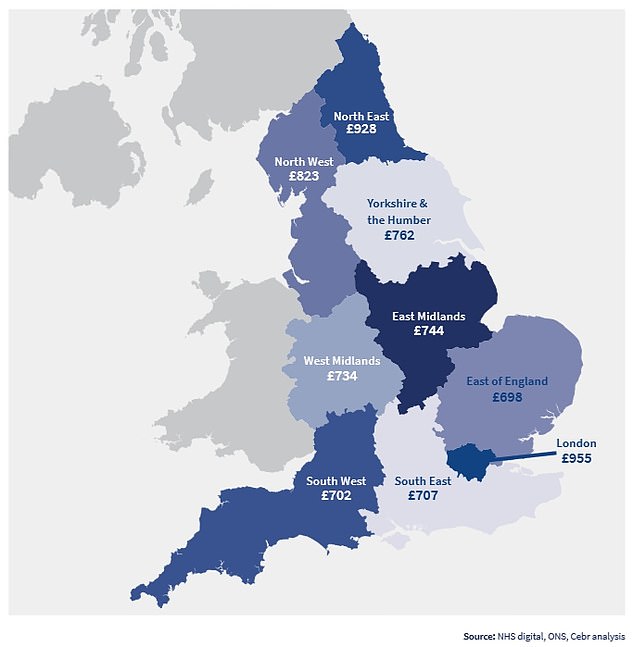