On September 5, I tried to buy Premium Bonds for my new granddaughter. I went online, filled out the forms and paid by debit card.

I was then asked to upload documents relating to the child’s birth, which obviously I did not have.

My son and his wife, who have the documents, both live an hour’s drive away. In addition, I am 76 and, while I have some computer skills, I have no idea how to ‘upload’ anything.

Good intentions: One reader’s attempt to buy some Premium Bonds for his granddaughter quickly descended into a stressful and costly ordeal

I decided simply to cancel the application and instead give the money to my son to buy the Premium Bonds. I expected my refund to arrive within 21 days, so September 26, but the date came and went.

I rang the call centre and was greeted by an extremely bossy woman who refused to listen.

Eventually I received a letter dated October 1 which stated: ‘We’ve refunded your money in full to the account it came from.’

I have been in touch with NS&I several times, but my £500 is still missing.

Anyone thinking of buying Premium Bonds for the child of a friend or family member as a last-minute Christmas present should be warned: it’s not something to be done in a hurry.

National Savings & Investments (NS&I) apologises that you have had to wait so long for your £500 refund. It seems that you supplied your own details rather than those of your son when asked for information on the parent. This is why you were asked to upload identity documents.

The application was cancelled on September 30, but due to a ‘clerical error’ your money was not refunded.

NS&I admits its customer service let you down and more should have been done to help you. Your £500 has now been refunded, plus £5.36 interest (based on the 8 pc flat rate recommended by the Financial Ombudsman) and a £150 goodwill gesture.

NS&I has made the teams concerned aware of the errors in order to improve processes and provide ongoing training to staff.

A spokesman says: ‘We apologise unreservedly to Mrs B.’ 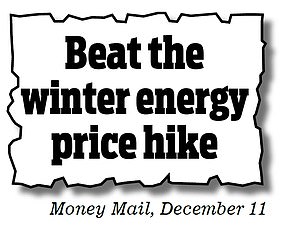 Every week, Money Mail receives hundreds of your letters and emails about our stories.

Here are some of the best from our report on how you could save money by locking into cheap energy deals before tariffs rise this winter.

The problem is that, as your contract ends, you could be hit by a 30 per cent price increase when you’re moved on to the standard tariff. Then you have to go through the stress of switching all over again.

I’ve switched to a small energy supplier which pays any exit fees you might be charged. I was with a Big Six supplier before and I had been asking to move to a lower tariff for ages.

Every year I use less and less energy, but I am charged more. I worry the day will come when suppliers charge you for using no energy at all — at least by then I’ll be in my grave.

My gas costs me very little during the summer and winter because my property retains heat very well. I do have to use cooling fans in the summer though, and that can bring up my electricity bill.

My previous supplier charged us £1,915 for gas and electricity when it was just the two of us in the house. I am very happy to have switched away from that company now.

I bought a multi-fuel fire eight years ago. I work for an engineering firm and the company always has piles of free waste wood. I’m fortunate, as it means I can always save money on gas and electricity.

Last month, my supplier increased my direct debit by 50 per cent, even though I was £94 in credit. These companies seem intent on building up a large float of other people’s money.

I was sent a cheque for the money I was supposed to be in credit, but then my monthly direct debit almost doubled from £32 to £62. Next came threats from debt collection firms.

I have an outside meter box which could easily be read by SSE, yet it sends me estimates that are way off the mark.

What on earth is SSE playing at? At the end of September, you received a demand from a debt collector for £504, yet you have never missed a payment.

Your bills are all over the place. The only consistent point is that the letter ‘E’, for estimated, appears again and again. SSE admits it used estimated meter readings when accurate ones were available.

Your account balance was amended several times, which led to confusion over who owed money to whom.

SSE has finally sent you an accurate statement.

Further good news is that, under licensing rules, you cannot be billed for energy more than 12 months in arrears if it was not charged for at the time. SSE has therefore cleared all charges beyond October 31, 2018, for which you weren’t billed at the time.

Your energy use has increased substantially, which explains to some extent the increase in your direct debit — and why your account has fallen into debit.

We are both 90 and have just finished paying a 12-year Sun Life funeral plan for my wife.

We are baffled by this.

I wouldn’t touch a funeral plan with a barge pole. But some people want to be sure there will be enough money to pay off the undertaker.

The key point is that this is insurance, and not an investment. It would have paid for your wife’s funeral if she had died five years ago.

I view these policies as lose-lose situations, especially in the early years. The best way to get value for money is to pop your clogs fairly quickly.

You bought the policy as a direct sale, possibly from a mail shot. Phoenix, which now owns the plan, says you would have received a welcome pack explaining the key features. There was also a 30-day cancellation period.

A spokesman says: ‘We believe we are very open and straightforward in our literature about risks.’