By Jane Denton For Thisismoney

The production of cars within Britain for the domestic market dropped by nearly a quarter last month on a year ago, new data shows.

Overall production levels are now at the lowest level they have been for nine years, the Society of Motor Manufacturers and Traders said.

Over 80 per cent of cars made in Britain are now destined for overseas markets and the number of cars manufactured in the country has fallen in 19 out of the last 20 months.

Exports on the up: Over 80 per cent of cars made in Britain are now destined for overseas markets

A year ago, the proportion of cars being made in Britain was just shy of 78 per cent.

Desperate to revive the country’s ailing car production market, the SMMT’s boss, Mike Hawes, has called on the Government to shore up the market by introducing ‘supportive measures’ in the next Budget.

He also wants the Government to ‘agree an ambitious trade deal with Europe’, suggesting this would alleviate ‘ongoing uncertainty and help the UK to recover its hard-won reputation as a great place for automotive investment.’ 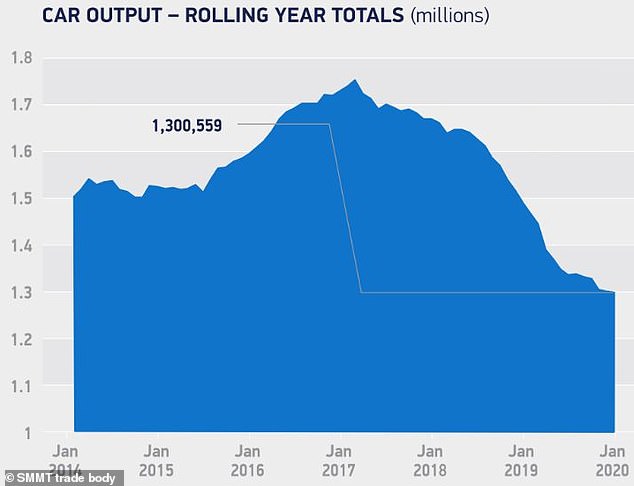 Output: The number of cars being manufactured in Britain over the last few years

Britain’s car market: Over 80% of cars made in Britain are destined for export 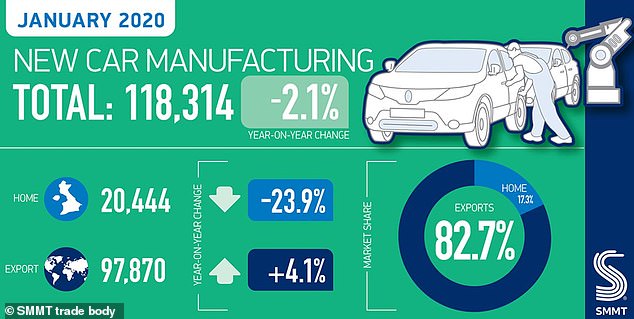 Market overview: The number of cars made in Britain for the domestic market fell sharply last month

Car factories up and down the country churned out 118,314 motors last month, marking the fifth successive month of falls.

Over 82 per cent of cars made in Britain are destined for export and overseas orders swelled by 4.1 per cent to 97,870 last month, bolstered by demand in Asia and certain parts of Europe.

This export-led growth failed to offset a double-digit drop in production for domestic orders.

Output for the domestic market fell by 23.9 per cent in January, ‘with continuing weak confidence meaning January car production overall recorded its lowest total for nine years’, the SMMT said.

Delving deeper into the numbers, there were 26,854 cars made in Britain for the domestic market in January last year, while last month, only 20,444 were made for the home market.

Hawes said: ‘Exports are the bedrock for UK car manufacturing so a rise in January exports is welcome following recent declining demand in overseas markets.

‘These figures, however, still give great cause for concern, with another month of falling car production driven by a lack of confidence and corresponding weak demand in the UK.’