U.S. stock indexes opened sharply lower on Thursday, as the rapid spread of the coronavirus outside China deepened investor worries about growth and corporate earnings.

If the Dow finishes the day down 361 points or more, it would be in correction, defined as a drop of 10 percent or more from recent peaks. Markets have entered corrections several times since the Great Recession in 2009, though not as rapidly as this week’s plunge.

Driving investor fears, the number of new coronavirus infections in China, the source of the outbreak, was overtaken for the first time by fresh cases elsewhere on Wednesday, most notably in Italy and Iran.

Adding to worries, the U.S. Centers for Disease Control and Prevention confirmed an infection in California in a person who reportedly did not have relevant travel history or exposure to another known patient.

‘In the recent week, markets have come to realize that the outbreak is much worse and are now realistically pricing in the impact of the virus on the economy,’ said Philip Marey, senior U.S. strategist at Rabobank.

‘In that sense it’s a bit of a catching up from the relative optimism that was there in the beginning when markets thought (the virus) will be contained to China with some minor outbreak outside.’

Rising fears of a pandemic, which U.S. health authorities have warned is likely, have erased about $1.84 trillion off the benchmark S&P 500 this week alone.

Industry analysts and economists continued to sound the alarm as they assessed the impact of the coronavirus, with Goldman Sachs saying U.S. companies will generate no earnings growth in 2020. 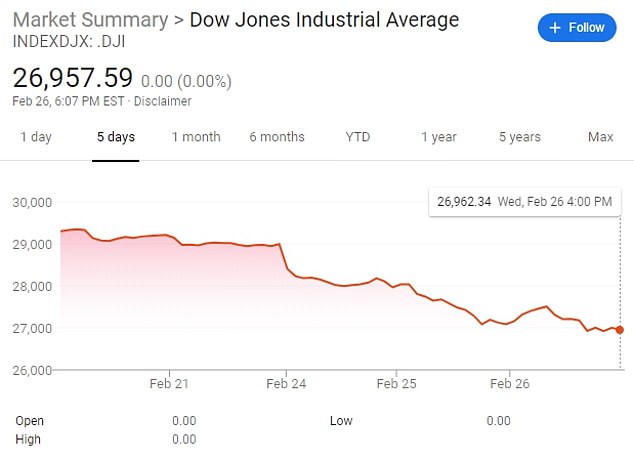 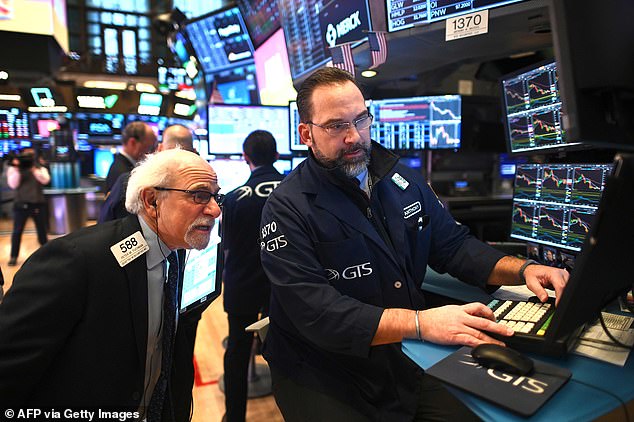 Traders work during the opening bell at the New York Stock Exchange on Thursday. About five minutes into trading, the Dow Jones Industrial Average was down 1.8 percent

Microsoft became the latest large company to warn investors about the virus´ potential hit to its finances. The software giant’s stock lost 2.8 percent after it told investors that the virus will hurt revenue from its Windows licenses and its Surface devices.

American Airlines plunged 8.5 percent as airlines continue to feel pain from disrupted travel plans and suspended routes. Delta Airlines, which is reducing flights to South Korea because of the outbreak in that nation, fell 4.5 percent.

Bank of America slashed its world growth forecast to the lowest level since the peak of the global financial crisis.

The virus has now infected more than 82,000 people globally and is worrying governments with its rapid spread beyond the epicenter of China.

The price of crude oil fell 4.7 percent. The price has been falling sharply as investors anticipate that demand for energy will wane as the economy slows.

A number of companies that could see their business jump if coronavirus reaches epidemic levels in the U.S. saw their shares rise in mid-morning trading on Thursday.

Shares of 3M, which counts surgical masks among its many products, rose 1.5 percent.

Chlorox, which makes the popular bleach brand that can be used to sterilize surfaces, was up 2.8 percent. 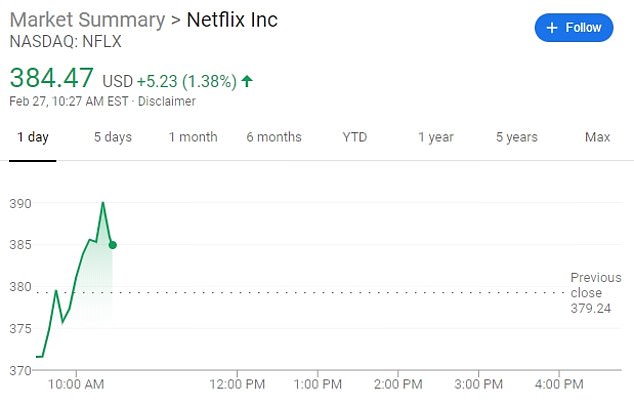 Netflix stock was up on Thursday, with investors betting that binge-watching at home could become more appealing than going out during an outbreak 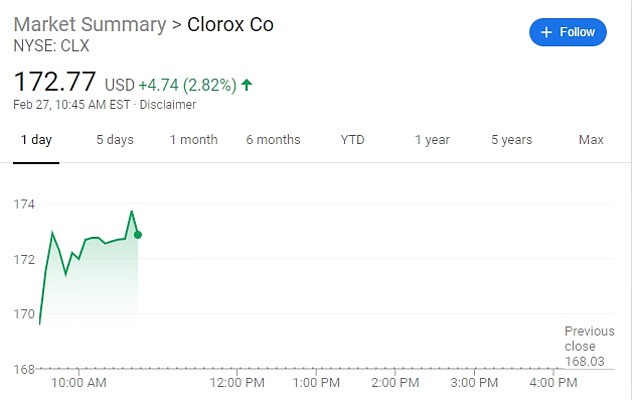 Chlorox, which makes bleach that can be used to sterilize surfaces, was also up Thursday

Gilead Sciences jumped 6.4 percent, as the drugmaker said it had started two late-stage trials to test its experimental antiviral drug, remdesivir, in patients with cases of illness caused by coronavirus.

While travel stocks were punished, companies that focus on ‘stay at home’ products also saw shares rise, as investors anticipated that consumers will be more likely to avoid crowds and remain indoors.

Netflix was up 1.6 percent, with investors betting that binge-watching at home could become more appealing during an outbreak.