The gold price went on a winning streak in 2019, sparking optimism that it could top the year high of $1,557 again next year.

Interest rate cuts in the US and elsewhere are making gold more attractive to investors, who see it as a store of wealth and hedge against inflation as well as a safe haven asset during financial and political upsets.

Gold priced in pounds reached an all-time high of £1,282 in early September, although this was a currency-driven phenomenon as it did not reach a record peak in US dollars, which it is typically priced in.

UK investors should be aware that means the post-election rise in sterling – which so far has been short-lived – might limit gains in pound terms from here, but as many buy gold as a long-term store of value this may not worry them.

Lure for investors: Gold is seen as a store of wealth and hedge against inflation, as well as a safe haven asset in troubled times

Gold priced in dollars, while posting gains in 2019, remains well off highs seen earlier in the decade – see the one-year and 20-year charts below.

At the time of writing in the second half of December, the gold price stood at $1,511 in dollars and £1,156 in sterling, after a slight festive rally.

So is it a buy right now? Investing experts have their say below.

How do you buy gold? Scroll down to find out your options

‘We’ve had three US rate cuts in 2019 and a dose of political uncertainty [so] then it’s no surprise gold has had a decent year.

‘Quite often gold performs well two or three years in a row so on that basis 2020 could be decent.’

Adrian Ash, director of research at online gold exchange BullionVault, says 2019 has seen a surge in private investing demand driven by the collapse in interest rates.

He points out that $17trillion of global debt was paying less than 0 per cent interest to new buyers of gold at September’s price peak.

He went on: ‘Many of this year’s professional and wealthy investors buying gold are choosing to own bullion in a vault, rather than just tracking prices through gold-backed ETFs.

‘That suggests a widening fear of financial turmoil as the 2020s begin, with investors using gold as a form of insurance for their wider portfolio.’

But Ash cautions that a prolonged rally in sterling from the three-decade lows it hit in 2016 and 2019 would prove a headwind for UK gold prices, and a strengthening currency is possible due to the new certainty on Brexit.

And he notes that if you don’t invest in shares, bonds or property ‘buying gold becomes little better than a coin toss’.

‘What price gold reaches in the 2020s matters much less than how it performs against other assets.

‘Because while gold isn’t guaranteed to gain value when other assets fall, that’s the way things have tended to work over the last half century.’

Gold price in pounds and dollars: Highs and lows of 2019 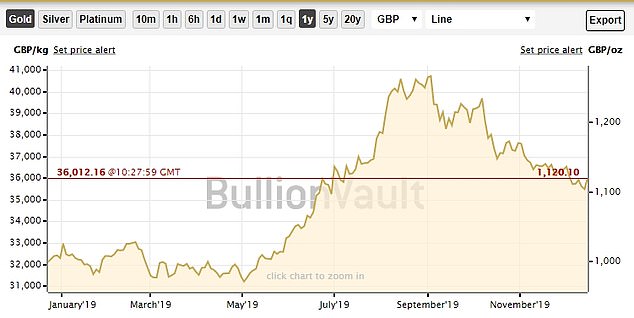 ‘Gold is the biggest sucker play out there’: Wait until it’s unloved and under $1k again, says investing expert

Brian Dennehy, managing director of FundExpert.co.uk, tipped gold in summer 2018 before it took off.

But he stresses this was ‘as a punt – certainly nothing more – when most were looking the other way’ and that when gold features in the mainstream media ‘it is usually a good time to run in the opposite direction’.

‘Now gold seems to be on everyone’s lips after a strong rise has already occurred,’ he says. ‘It was ever thus – gold is the biggest sucker play out there, and ‘believers’ are being sucked in right now.

‘In August 2018 the clearly flashing buy signal was derived from the single best gold indicator – sentiment. In August last summer everyone hated gold. Well, almost everyone.

‘Because if you don’t get emotional about gold (most do, and are consistently wrong in their timing), you can exploit the love/hate relationship of others with gold.

‘In recent months gold was all over the media, recommendations were swamping my inbox, ‘experts’ proclaiming a new dawn were two a penny.

‘There was none of this in summer 2018 – that was the signal to buy at that time, loud (well, quiet) and clear.

‘I might end up being wrong, but this is my best current guide based on my (unemotional) connection with gold over too many decades to count.’

‘In both cases your value will go up and down broadly in line with the gold price.

‘However, the evidence is that you will generate bigger returns via a fund investing into gold mining companies such as Smith and Williamson Global Gold and Resources.’

How has gold fared over the past few decades?

The gold price in dollars peaked at $1,900 in summer 2011 as global markets recovered from the financial crisis, and remains substantially below that level now.

It’s a different story for UK buyers of the precious metal, which as noted above saw gold in pounds surge to a new record high this autumn, thanks – in part – to a weak pound.

Ash explains: ‘After the chaos of the Millennium decade, the 2010s delivered solid gains for stocks and shares as low interest rates and quantitative easing from the Bank of England squashed volatility across the financial markets.

‘That deterred new gold demand from fund managers and larger investors, but 2018 saw geopolitics drive gold buying among central banks to the most in half-a-century, led by Donald Trump’s trade war.’

Two decades of gold prices: All-time dollar record was in 2011 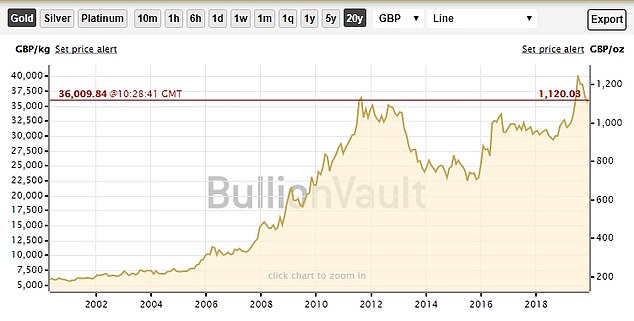 How do you buy gold?

Savers have a number of ways of buying gold as an investment, writes Simon Lambert.

Physical gold is the main way to tap direct into actual gold, by buying bullion or coins. This can either be done through a traditional dealer or through an online service such as GoldMadeSimple, or BullionVault. You can read more about how to do this on the World Gold Council’s website.

Exchange Traded Commodities are also a direct route into gold. ETCs, like Exchange Traded Funds, track a particular sector, or in this case commodity.

They are passive investments and should merely mirror gold’s moves, although some will offer leveraged returns or the opportunity to short the price. Make sure you understand the difference between ETCs that are physical (actually buying gold) and synthetic (set up to mimic its price). Read this guide to ETFs.

Funds enable investors to buy into a basket of shares of gold miners, producers and associated companies. However, the performance of individual firms does not always echo gold’s rises and falls, and in fact, gold mining shares can fare worse than the gold price – especially smaller companies.

Full guide: How to invest in gold.