MARKET REPORT: Trade talks push Wall Street to record highs as spat between China and the US moves a step closer to being resolved

The rise came a day after the US and China moved a step closer to resolving their 18-month trade stand-off by signing a preliminary ‘phase one’ agreement.

It has been a choppy period for markets, which were unsettled each time the trade spat heated up with angry words exchanged and fresh tariffs slapped on each country.

US stocks were on the up as traders digested the deal between China and the US, which IG senior market analyst Joshua Mahony described as ‘somewhat lopsided’ in the US’s favour

But US stocks were on the up as traders digested the deal, which IG senior market analyst Joshua Mahony described as ‘somewhat lopsided’ in the US’s favour, as it sees China committing to buying £150billion of US goods and services in exchange for a slight reduction in tariffs.

Record profits from US banking giant Morgan Stanley also added to the cheer.

The mid-cap index was supported by a jump in Wood Group’s stock. The oilfield services and engineering firm surged 7.6 per cent, or 28.1p, to 398.1p after it said 2019 profits would be well ahead of the previous year’s figures and that it is making solid progress paying down its debt pile. 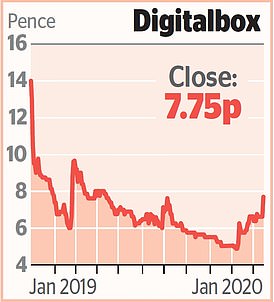 The popularity of online stories about presenters Ant and Dec and the royal family have boosted profits at the owner of celebrity news site Entertainment Daily.

Digitalbox, which also owns satirical news site The Daily Mash, said its 2019 profits would be ahead of expectations after the number of those clicking on Entertainment Daily stories from Google searches grew by 127 per cent.

It now expects to bring in up to £658million, up from £531million, though this was below a company-compiled forecast of about £661million and revenue is expected to fall from the previous year.

Investors warmly welcomed the news that it has trimmed net debt – which had been mounting since its £2.2billion takeover of smaller rival Amec Foster Wheeler in 2017 – down from £1.4billion at the end of June to £1.1billion.

Rank Group was also on the up as it bet on profits being higher than expected in the year to the end of June.

The Mecca Bingo-owner reckons it will make as much as £115million, up from an earlier estimate of £103million. Shares jumped 4.9 per cent, or 13p, to 280p on its royal flush.

Trading was in line with expectations over at Magners and Bulmers cider maker C&C, but the FTSE 250-listed drinks group lost ground after chief executive Stephen Glancey announced he will retire from the company at the end of February.

He has already stepped out of his role but will hang around to assist with a hangover.

And struggling contractor Kier Group released a reassuringly mundane update that said trading was ticking along as normal and it is still progressing with plans to cut costs, dispose of its housebuilding business and working out what to do with another property division.

After a turbulent couple of years, investors greeted Kier’s statement by sending shares up 0.7 per cent, or 0.5p, to 78p.

Aside from the slew of financial results and trading updates, it was an awkward start to the job for Shoe Zone’s new chairman, Charles Smith.

Shareholders in the AIM-listed retailer greeted the news that interim chairman Smith will step up to the permanent role by sending the firm’s stock down 4.8 per cent, or 8.5p, to 167.5p.

This will see it snap up BP oilfields for £475million and buy assets from a Korean group for £188million.