With a reassuring whirr and clunk, the glass doors slide shut behind me. I take my seat, clip on my seatbelt, settle back, unfurl my copy of the Daily Mail — and off we go.

What’s unusual about this is that I’m the only person in the vehicle — and one of the first in the world to experience the pioneering, fully electric, self-driving ‘pod’ cars that are due to hit British roads next year.

In its boxy, high-ceilinged appearance, Jaguar’s ‘robocar’ is reminiscent of a London Tube carriage — although it’s far more technologically advanced. It is a comfortable, almost cosseted space, light and airy thanks to vast expanses of glass.

Inside are two pairs of comfortable seats that swivel round, allowing you to talk to the people behind you and which wouldn’t look out of place in a trendy airport lounge.

Acceleration, as in all electric vehicles, is surprisingly fast, reminding me — somewhat irreverently — of the almost-silent whirr of the milk float. But with a top speed of 75mph, this really would be the ‘fastest milk float in the West’.

This new car, which has a range of 190 miles between charges and can be configured to fit from two to six passengers, has been unveiled to me (and to the eco-minded Prince Charles last week) at Warwick University near Coventry — Britain’s own ‘Motor City’, which once had a car factory on practically every street corner, making marques such as Austin, Rover, Triumph and Standard.

Being ferried around in the pod inside the university’s vast design studio offers a fascinating preview of what this vehicle will do on the road.

My robotic pilot navigated the space with aplomb, cleverly dodging engineering equipment and about a dozen technicians from Jaguar Land Rover, who nervously crossed their fingers as they watched me waving at them from inside. It was nothing like a dodgem ride. 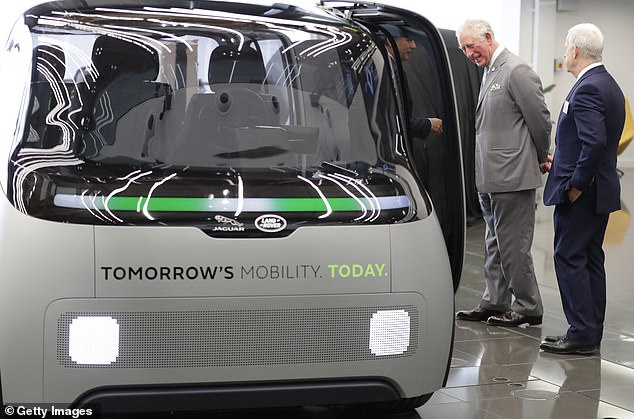 Inside, you quickly become very relaxed, reading the paper or day-dreaming. Then, every so often, reality hits home and you think: ‘There’s nobody driving this thing. And it’s just me in it!’

It’s easy to become starry-eyed about the dream of driverless cars, but the reality represents significant technical, social, legal, moral and political challenges.

However, engineers and scientists are upbeat that the technical challenges, at least, can be met. After all, in recent memory, sat-nav and smartphones were science fiction: now they are the norm.

The Government is committed to helping Britain become a world-leader in autonomous technology and we can expect to be one of the first countries in the world — perhaps the first — to have driverless cars operating on our roads.

Ministers are now drawing up a ‘Digital Highway Code’ to get self-driving cars on the road by next year.

Proponents argue that these vehicles will help reduce the terrible toll of casualties on the road, because autonomous and computerised cars are safer than human drivers prone to human error.

Self-driving cars do not drink-drive, fall asleep, get distracted, suffer from road rage — or even, as we saw last week in the case of one lorry driver, eat their breakfast cereal from a bowl while hurtling down the motorway.

Even human drivers who do stick to the rules must share the roads with dangerous idiots. In a world filled entirely with driverless cars, that would stop. 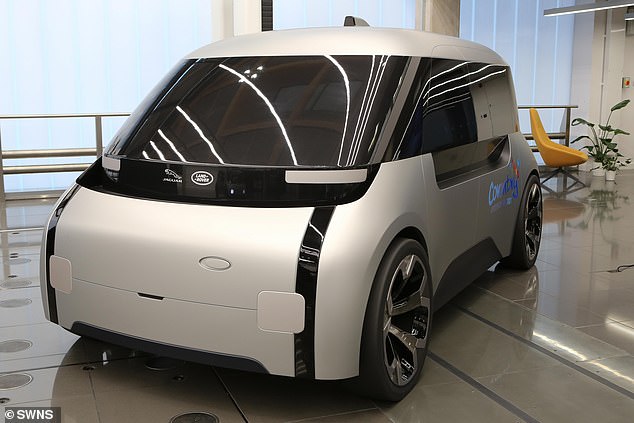 Proponents argue that these vehicles will help reduce the terrible toll of casualties on the road, because autonomous and computerised cars are safer than human drivers prone to human error

‘The most dangerous part of any car,’ runs the old truism, ‘is the nut behind the steering wheel.’

Yet that is not to say it will definitely be quick or easy for these cars to be accepted. Would you entrust your life to a vehicle without a driver? Maybe not today.

But if you have used the Docklands Light Railway in London, you have already done so. And if you park your car at Heathrow Airport, you may be taken to the terminal in a self-driving pod.

Yes, in both cases those vehicles are confined to a dedicated track. But, step by step, people are already handing over their lives to machines.

The legal challenge perhaps represents the biggest threat to driverless cars on UK roads. ‘Where there’s blame, there’s a claim,’ is the mantra of ambulance-chasing lawyers the world over.

And who will be to blame if — and when — an autonomous car crashes? The manufacturer? The owner? The passenger? Lawyers will get rich arguing these points.

Should you be allowed to enter a driverless car when drunk? And, faced with an unavoidable accident, when the car must decide whether to hit a pedestrian or swerve and risk the lives of the occupants, what should it do?

And what about hackers taking control of computerised cars and using them for mischief?

Critics insist the dash to self-driving is too quick and the proposed take-up is unrealistic.

There is already a case-file of high-profile fatal and serious accidents involving cars replete with new technologies, including the Teslas created by eccentric billionaire Elon Musk, which already contain many self-driving features.

A fatal crash in Arizona involving a self-driving Uber last year also fuelled concerns that the technology is being rushed.

Yet many of these new technologies are making their way into new cars that many of us drive already.

These features include: lane keeping assist, which nudges the steering wheel back into the lane if you start to drift because of inattention or tiredness; intelligent cruise control, which keeps the vehicle a set distance from the car in front and applies the brakes if you get too close; and automated emergency breaking, which slams on the anchors if it detects you are about to hit the car in front.

You can even get your BMW, Volvo and other models to park themselves.

Despite the worries, Jaguar Land Rover is upbeat and claims its new project is a ‘bold next step’ in the journey towards a high-tech future of roads with ‘zero emissions, zero accidents and zero congestion’.

The newly opened centre is based at the impressive Professor Lord Bhattacharyya Building, named after the late entrepreneurial academic who helped create new forms of flexible manufacturing used throughout the motor industry today, such as having different car models assembled on the same production line.

Such is the futuristic feel of the place, I was reminded of the sci-fi film 2001: A Space Odyssey. Design director Richard Woolley and his team use virtual reality and mock-up interiors with 3D moving imagery to design flexible interiors that are not restricted by the conventional car lay-out.

Overall project chief Dr Tim Leverton, who oversaw my trip, told me that although the footprint of each pod is about the same as a Ford Fiesta, clever design means there is as much interior space as in an SUV or 4×4.

And it’s clear that the sheer convenience will make driverless cars attractive.

Dead time wasted on long car journeys will be freed up, significantly boosting productivity and efficiency as, suddenly, every employee enjoys a ‘chauffeur-driven’ ride. Long car journeys can become an opportunity to sleep or watch a film.

After my exclusive spin, Project Vector’s design director Richard Woolley told me: ‘You have now done more miles in this car than anyone else on the planet.’

As I stepped out of the pod, my mind was cast back to a previous visit to Warwick many years ago.

Back in the 1980s, as a cub reporter on the Coventry Evening Telegraph, I was given a guided tour of this part of the campus by the then-recently arrived Professor Bhattacharyya, whose name is now emblazoned across the building.

Much of the surrounding land remained green fields back then, but new research centres for the Warwick Manufacturing Group and Jaguar Land Rover were already in the offing.

The professor told me that he predicted the world would, in decades to come, see cars displaying ever greater autonomy in both the manufacture and the driving. How prescient he was.

Shortly before he died in March 2019, I caught up with him again over dinner at the RAC Club in London’s Pall Mall. I reminded him of what he’d told me all those years ago — and pointed out how it had, as he foretold, come to pass.

Just wait and see what’s coming next, he replied.

You ain’t seen nothing yet.