The new FCA overdraft rules: How regulation revamp leaves you WORSE off

By Toby Walne for The Mail on Sunday

A major shake-up of overdraft fees by the big banks has drastically slashed the amount of money that customers can save by shopping around for a better deal.

Analysis by the MoS has found that radical changes to charges for dipping into the red – which were supposed to help customers – have backfired after banks were forced to take action by the City watchdog.

A customer who goes £1,000 into an agreed overdraft for three weeks would now save just £8.61 by switching from the most expensive to the cheapest bank. This is down from a potential saving of £28.45 before.

In the past few months, nearly all banks have moved from a confusing array of fees and charges to a single percentage fee for arranged overdrafts.

But most settled on very similar charges around 40 per cent.

In some cases, customers face paying double the total fees charged before. On top, the effect has also been to reduce the options for those who decide to move to a cheaper rival.

The lack of competition will hammer those who set up arranged or ‘authorised’ overdrafts. This is when you alert your bank before you dip into the red.

Andrew Hagger, of financial researcher MoneyComms, which crunched the numbers for the MoS, says: ‘The regulator’s move penalises those who have a spotless credit record – and is bad for competition.

Sadly, transparency and ethical practices are in short supply among high street banks. The regulator could do more to increase competition and force banks to come clean about the true costs.’

Banks have overhauled their overdrafts in response to regulations that outlaw sky-high ‘unauthorised’ overdraft rates.

This is when you dip into the red without telling the bank first. Banks rake in £2.4billion a year from what the Financial Conduct Authority has called a ‘dysfunctional’ market.

Banks were told they could no longer charge daily fees and their response has been to create one interest rate for both arranged and unarranged overdrafts.

For example, before the new rules were outlined last year (they come in this April, but banks have moved in advance), Lloyds could have charged more than £1 a day to dip into the red. 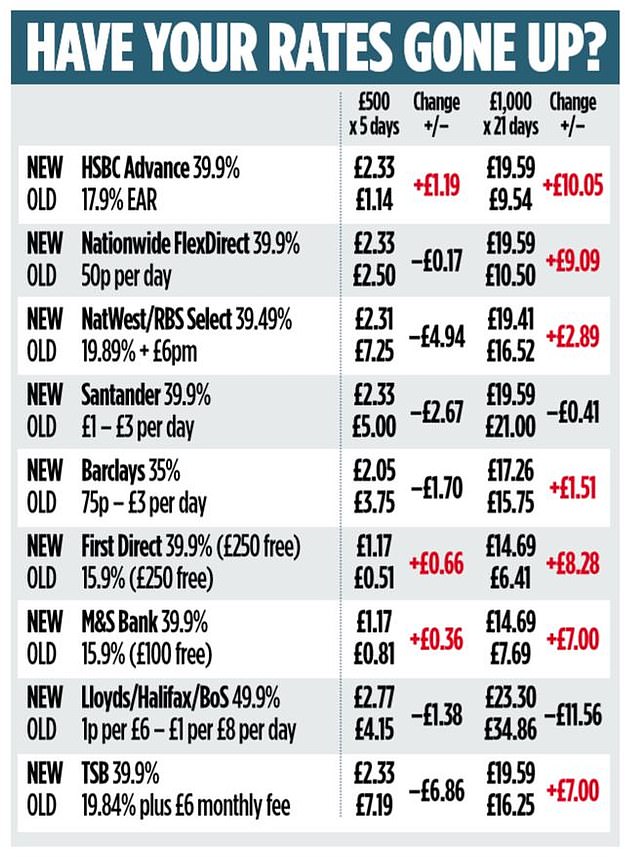 James Daley, founder of consumer campaign group Fairer Finance, says: ‘The effect of this new regulation is not good for competition as it is forcing banks to charge at a similar rate – no matter what their financial situation or customer base might be. This leads to less choice.’

Nationwide Building Society was the first to unveil a hike to arranged overdraft rates – from 18.9 to 39.9 per cent last October. Barclays is hitting authorised overdraft customers with a 35 per cent rate, NatWest 39.49 per cent and Lloyds 49.9 per cent.

Customers of banks that previously charged a daily rate, such as Barclays, which charged between 75p and £3 a day, depending on how much a customer went into the red, might be better off under the new deal, but only if they borrow small sums for a short period.

The FCA wrote to banks last month asking them to explain their pricing policies. But the regulator claims as many as seven in ten customers may be better off under the changes. The rules stop unauthorised overdraft rates being higher than authorised ones.

The FCA says: ‘Our reforms of the market have ended high unarranged charges. The cost of overdrafts has now been made more transparent. We will be keeping a close eye on the market and will act should we see continued harm.’