Ever been hit by an unfair parking penalty or plagued with nuisance phone calls? Who hasn’t? Then you’ll know how hard it is to get someone to handle your complaint properly.

You spend hours waiting on the end of a phone line stuck with on-hold music and ‘your call is important to us’ lies – only for a computer to hang up on you.

Writing a letter or email is often just as maddening.

It’s hard to know if your correspondence ever reaches someone, or just gets thrown in the bin.

The DoNotPay website has been a runaway success. Claim compensation today

And even if you do get a reply, it’s inevitably the same standard rejection letter everyone seems to receive.

Well, now you are finally able to turn the tables with some technology of your own – the 21st Century ‘robot lawyer’.

This technological marvel uses computer software to battle stubborn – or downright crooked – companies on your behalf.

By fighting the bureaucratic machinery with its own software, it never runs out of patience in its quest for justice.

It also knows all the legal loopholes to ensure you are no longer ripped off.

And unlike a real-life lawyer who might fleece you all over again, the humble robot charges just £3 a month.

It is the brainchild of British-born Joshua Browder. Aged just 23 and now based in California, he has developed a DoNotPay app.

One word of warning. The monthly £3 subscription must be cancelled without the help of the ‘robot lawyer’ when its service is no longer required.

And, in any case, you can easily fight the system yourself for free – inspired by what the software can do. 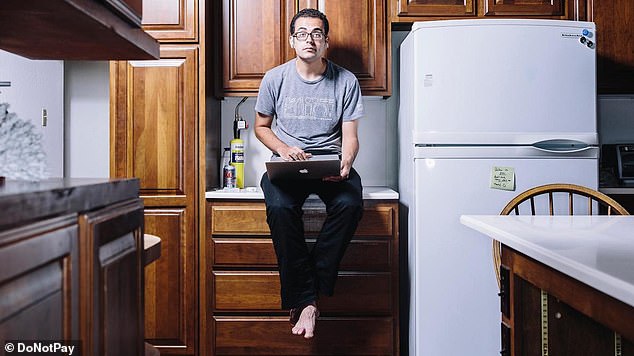 The software not only knows all the tricks of the legal trade, but gives guidance on what you must do to seek financial redress if you want to go it alone.

Browder explains: ‘It is high time people took back the power.

‘Modern technology is often used by greedy big companies to unfairly grab our money – but I have been working on computer technology to enable the victim to fight back with software support of their own.

No longer do people need to feel harangued. Thanks to the way the app is designed there is no need for you to hire expensive legal lawyers – the software can do it automatically.’

So how does it work and could his clever app step in to help you battle the parking and nuisance caller cowboys?

HOW ROBOT LAWYER FIGHTS YOUR TICKET

The number of parking tickets being dished out is soaring in Britain. Last year the figure was up 20 per cent to 6.8 million. according to the DVLA, which tracks requests for vehicle records by private parking companies.

The DoNotPay robot lawyer tackles unfair tickets by asking the motorist for details via text message about why and how they were hit with a penalty – then working out the best strategy to fight any fine depending on your replies.

Tricks that will get your call answered

Getting through to a real person on the phone to deal with a problem can often seem like a challenge too far – but the robot lawyer has the brains to know the best way to find firms that fail to pick up a call.

The DoNotPay software contains details of thousands of firms – from utility companies to outfits selling subscriptions – and if you tap in the name of the company using the app it will try and find the best number to call.

It is rarely the hotline given out on a website but a less well-known phone code, perhaps one reserved for ‘VIP’ customers or company staff.

This can bypass the hours of hanging on the end of a telephone endured by modern callers – a torture firms adopt knowing most eventually give up.

This service can also be particularly useful for cancelling subscriptions for services you no longer require, such as gym memberships and music streaming.

And if someone eventually answers the call stonewalling you with demands your request must also be put in a letter form, the robot lawyer comes up with an answer to this problem too.

It automatically generates the necessary paperwork for you to print out, sign and post to the company.

This includes escalating the complaint through a local authority or private car park up to independent adjudicator level.

This can be done on your behalf by the robot – or it can email an official letter for you to print out and post to fight the fine.

The top reasons the robot lawyer beats a parking rap are if there is missing or defective signage, there is a mistake on the ticket such as a slightly wrong description of your vehicle, payment was actually made or there were problems fitting in the bay.

According to the Road Traffic Act, bays must be at least 180cm wide.

The app starts by texting you questions – such as: ‘What do you think is wrong with the ticket?’, and ‘Explain what was wrong with the signs.’ From this it gleans enough detail to tell you what to do next.

A council ‘penalty charge notice’ must be appealed against within 14 days.

If it does not budge on your initial appeal a ‘notice to owner’ demand is sent out – and the robot lawyer has a further 28 days to help you argue the case.

If the council still demands you pay, it sends a final rejection letter.

With the help of the robot lawyer – or doing it yourself – you then appeal to an independent adjudicator within 28 days.

This is the Traffic Penalty Tribunal in England and Wales, the Environment and Traffic Adjudicators in London and the Scottish Parking Appeals Service in Scotland.

Those who get a ‘parking charge notice’ when parked on private land can no longer be clamped under the Protection of Freedoms Act 2012.

The robot lawyer will clearly point out this legal fact and show how to argue your case.

If your initial private car park appeal is rejected you usually have a further 28 days to put your case to the independent Parking on Private Land Appeals scheme, which is backed by the British Parking Association.

Do not be daunted by the challenge as the robot lawyer holds your hand all the way as it stands up to the bullies.

Some 40 per cent of parking tickets challenged are thrown out in Britain – though only one in four drivers bothers to appeal.

Bowder claims there has been a 60 per cent success rate since the app was developed in 2015, saving US motorists £20million.

He hopes UK drivers will now embrace the service to save themselves similar sums.

This month the DoNotPay app is broadening its scope by also offering a ‘robo revenge’ facility – where software fights unwanted callers.

First, you should independently register with the Telephone Preference Service to demand none of the 950 companies that are members of the Direct Marketing Association will call.

Non-members and foreign firms could still sneak through, but this should limit the cold-callers.

Once you’ve signed up with the robot lawyer, you are automatically telling DMA members to leave you alone – or else.

If one of these companies flaunts its own membership guidelines and rings you – trying to sell an unwanted service, for example – then the robot also turns nasty.

Tap in details of the caller to the robot lawyer while it is still harassing you on the phone and it instantly comes back with fake credit card details for you to give to this nuisance caller.

You are not buying anything or giving away personal details.

The robot lawyer has simply tricked the caller – and once the phoney credit card details have been handed over the robot is able to harvest data, such as where the company is based, to exact revenge.

The robot lawyer then provides a formal addressed legal letter for you to print out and post to the offender – demanding recompense for flouting the direct marketing rules.

Technically, the company has broken Privacy and Electronic Regulations 2003.

These are largely untested, but even if you do not get any money back it should put a stop to the company haranguing you.

With the help of the robot, you can also report the caller to industry watchdogs the Information Commissioner’s Office and the Office of Communications.

These have the power to fine any callers that have breached phone sales regulations. The robot lawyer also generates documents you can file to a small claims court as a warning to be left well alone.