Up in smoke: Ban on the sale of wet wood and house coal hits 2.5 million homes as the Government clamps down on toxic air pollution

By Colin Fernandez Environment Correspondent For The Daily Mail

Homeowners will be stopped from buying coal and wet wood logs from next year as part of a Government clampdown on toxic air pollution.

An estimated 2.5million homes in the UK have hearths with open fires or woodburning stoves.

But from 2021, traditional coal and wet wood, used by thousands across Britain, will be phased out amid concerns that tiny pollutant particles emitted when they burn can lead to serious health conditions.

Wet wood logs have not been dried to reduce their moisture content.

The move could force scores of households to switch to more expensive alternatives – with critics last night warning that some would be left unable to heat their homes.

Burning wet wood and coal in homes emits huge amounts of minuscule pollutants, known as PM2.5, which can penetrate deep into the lungs and blood.

When alight, they let off 38 per cent of the total PM2.5 pollution in the UK – more than road transport and industry combined, according to government figures. 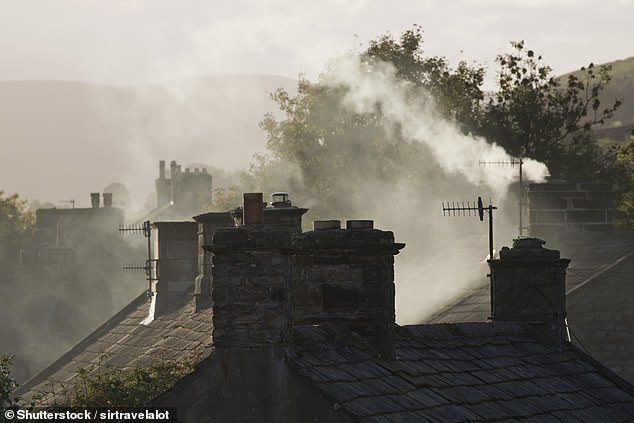 Smoke coming from a chimney in the Yorkshire Dales (file picture)

The particles – each one 28 times smaller than the width of a human hair – can cause or aggravate asthma, strokes, lung cancer and heart disease.

WHEN IS TIMBER TOO DAMP?

Wood logs are considered wet when the moisture content is above 25 per cent.

A rough guide to seeing if your logs are too wet to burn is to knock two pieces together — if they make a dull thud, then there is too much water for a fireplace. 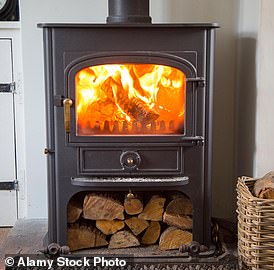 Wet wood will also result in too much smoke and a build-up of creosote inside the fireplace and flue. If you need to dry out wet wood, then it is best to split it into smaller pieces and then air dry for the spring and summer.

It is advised to dry wet wood for up to 18 months before it reaches the ideal moisture content.

Wood is considered dry when its moisture content is below 20 per cent. Instead of using wet wood and coal homeowners will be instructed to burn dry wood or smokeless fuel instead – both of which are much more expensive.

Around 2.5million tons of logs are sold in the UK each year, of which 90 per cent are wet wood. Around 350,000 tons of house coal are burnt each year.

Ian Gregory, an independent lobbyist for the fuel industry, said the move would make ‘people freeze in their homes’. He added: ‘This is appalling news for the rural poor. Nearly 4million people are off the gas grid in the UK.

‘Many of them keep their homes warm with coal because they can’t afford briquettes which cost twice as much.’

Environment Secretary George Eustice said: ‘By moving towards the use of cleaner fuels such as dry wood we can all play a part in improving the health of millions of people.’

Professor Stephen Holgate, Royal College of Physicians’ special adviser on air quality, said: ‘Inhaling combustion particles from any source is harmful, but more so than ever when it’s directly within your home.’

Sales of bagged traditional house coal will be phased out by February 2021, as will sales of wet wood in units of under two cubic metres.

The sale of loose coal direct to customers via approved coal merchants will end by February 2023.