Alison Rose’s revolution: Royal Bank of Scotland changing its name to Natwest Group as it seeks to put its chequered past behind it

Royal Bank of Scotland is changing its name to Natwest Group as it seeks to put its chequered past behind it.

In a bid to draw a line under its near collapse under disgraced former boss Fred Goodwin, recently appointed chief executive Alison Rose said the rebranding ‘marks the start of a new era for our bank’.

Rose, the first female boss of a major UK lender, also announced plans to halve the size of its investment bank, Natwest Markets, putting thousands of jobs at risk.

The plans, less than four months into Rose’s tenure as chief executive, came as RBS reported a 26 per cent rise in annual profits on the previous year to £4.2 billion.

Under Goodwin, RBS racked up the biggest loss in British corporate history of £24.1 billion in 2008. It was then rescued by the taxpayer in a £45.5 billion bailout.

Rose’s overhaul will see RBS retain its 300-year-old brand name for its Scottish branches, but the parent company will change to Natwest, its major business south of the border.

Chairman Howard Davies said: ‘The essential reason for this is that as the bank has evolved from the financial crisis and the bailout, we have focused on the Natwest brand.

‘We have exited a lot of the international business which were not profitable. That was branded RBS and that’s gone.

‘It really makes no sense for us to continue to be called RBS. It was designed for a global group of brands, which we no longer are.’

Bosses assured employees that it would not be uprooting its Edinburgh headquarters and shifting to London.

But Davies said: ‘It would be necessary to look at our location if there was Scottish independence, but not before that.’ 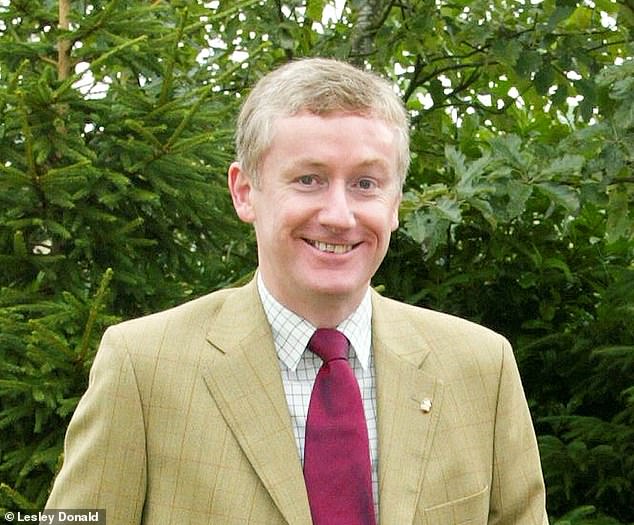 Shredded: Under Fred Goodwin, RBS racked up the biggest loss in British corporate history of £24.1 billion in 2008

But the new name for the parent company does mark a break from the past for RBS.

In the run-up to the 2008 financial crisis, Goodwin – who earned his Fred the Shred moniker for his ruthless cost-cutting – pursued rapid expansion as he set out on his mission to turn RBS into the world’s largest bank. This culminated in the acquisition of Dutch Bank ABN Amro in late 2007, a deal which left RBS with dangerously low capital levels.

Goodwin’s dream crashed around his ears in 2008 as the economy stuttered and RBS was brought to the brink of collapse, saved only by the £45.5 billion taxpayer rescue. Now Rose has begun her own crusade to focus RBS’s operations and boost returns to shareholders. 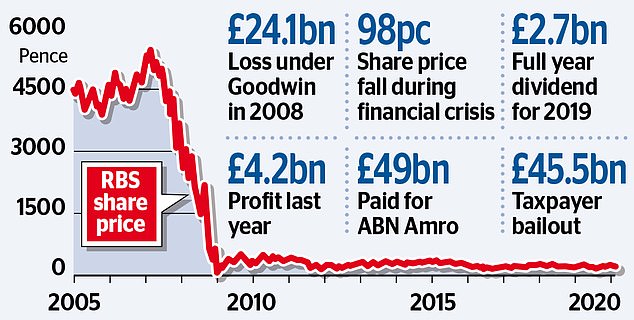 She said Natwest Markets would become ‘a much smaller and simpler part of the business’, focused on the essential services needed by the group’s corporate and institutional clients.

RBS has been slow to recover since its bailout, and the Government still owns a 62 per cent stake.

Analysts greeted the name-change with some scepticism. David Buik, of Core Spreads, said: ‘It is probably the right initiative, but many questions are left unanswered. When will the taxpayer get its money back? When will shareholders get bang for their buck?’

RBS has pledged to pay £2.7 billion in dividends to shareholders for 2019 – including £1.7 billon to the Treasury.

The bank will hand out 22p per share for the full year, in a boost to long-suffering investors who have endured more than a decade of pain since the financial crisis.

This will top up the Treasury coffers, as the Government still owns 62 per cent of RBS following a £45.5 billion bailout in 2008.

Another year of profits and a shake-up from new boss Alison Rose looks set to pave the way for the Government to resume selling down its stake in RBS, which at one time stood at 83 per cent.

The bank is building up cash reserves so it can buy back its own shares from the taxpayer, and speed up the process of privatisation. While it is limited to buying a maximum of 5 per cent of its own shares in any one year, it could strike a deal directly with the Government if the Treasury decides to sell shares in the market.

RBS chairman Howard Davies said buying back shares and returning money to the taxpayer was a priority. He added: ‘It’s prudent to ensure we have the capital to participate in such a buyback.’

The 7.5 billion shares still held by the Government are currently worth a total of £16 billion. For the taxpayer to recoup all the money spent on the bailout, the Government would have to sell shares for around 730p – but last night they were languishing at 213.1p.

It abandoned its 12 per cent target for return on tangible equity – or the return it makes on money invested by shareholders. Instead, Rose will be aiming for a return between 9 per cent and 11 per cent by 2021.