My husband is a chef and receives less than 50 per cent of his earnings through salary.

The rest comes to him through a separate payment system called Tronc, which is made up from tips that are given to staff, with a share paid to chefs and kitchen staff too.

This amount is not guaranteed and as it comes from tips, he does not have to pay National Insurance on it.

Restaurant staff: Are tips treated as income when it comes to whether you qualify for child benefit payments? (Stock image)

Would this part of his earnings be taken into consideration for child benefit? If it isn’t then his income falls below the threshold at which child benefit is removed, but if it is then he will go over the threshold.

We have not registered for child benefit yet and so I am not sure what to do.

Tanya Jefferies, of This is Money, replies: We asked HMRC on your behalf and it confirmed that earnings through Tronc are counted for income tax.

Therefore, they are also treated as income when it comes to whether you qualify for child benefit payments or not – or in official jargon, whether you are subject to the ‘High Income Child Benefit Charge’.

But unfortunately, child benefit isn’t a simple issue and this isn’t the end of it.

We have run numerous stories about fallout from the rules and the unlucky families who have lost out financially or faced a bureaucratic nightmare over accidental errors.

Have you lost state pension by not signing up for child benefits or filling form in wrong?

If this has happened to you, contact [email protected] and tell us your story.

So it’s worth explaining how ‘HICBC’ works, why it is hugely important to register for child benefit within three months of a birth even if you don’t qualify for payments, and a few other traps for the unwary.

What are the rules on qualifying for child benefit?

This caused an outcry because it penalises families in which one parent earns just over £50,000, but those where both parents earn just under that amount still get child benefit paid in full.

Many couples who were unaware of the changes or the fine details then fell foul of the taxman.

Families complained of being hounded by the taxman for thousands of pounds in fines and demands for repayment. HMRC was slammed for its heavy-handed treatment of otherwise law-abiding taxpayers who made innocent mistakes.

It eventually cancelled penalties issued to 6,000 families for failing to notify it of income changes that meant they weren’t entitled to receive child benefit.

It reviewed 35,000 cases where a ‘failure to notify’ penalty had been sent, and reversed them when it decided customers may have a reasonable excuse.

But it refused to waive a £620 fine handed to one mother of three, who had faced a shock demand to stump up nearly £10,000 of penalties and repayments within a month, by a Christmas deadline of December 27.

The case highlights the pitfalls couples must navigate, because she originally thought her family still qualified for child benefit as her salary was below £50,000 when HICBC was introduced.

Her mistake, after only paying tax via her employer for decades and never filling in a tax return before, was not to realise company benefits should be included as part of her income.

Why you should ALWAYS register for child benefit

HMRC said in its response to your question that it always encourages those eligible to claim child benefit regardless of their income, to earn National Insurance credits and so a child automatically receives an NI number when they turn 16.

The significance of ‘to earn NI credits’ cannot be overstated.

To put this in layman’s terms, parents permanently lose the right to what can amount to tens of thousands of pounds in state pension credits if they don’t sign up for child benefit. (The NI number issue can easily be fixed later.)

This is Money is campaigning against the unfairness of people – mostly mums – potentially ending up worse off in retirement due to this error.

HMRC will only backdate credits by three months when you sign up late, so it is crucial to do it before your baby reaches that milestone.

So those who had a child in 2013 and have not signed up for child benefit since then stand to lose £35,000 worth of credits, to date.

Parents are almost entirely in the dark about the link between claiming child benefit and their eventual state pension, according to research by HMRC itself.

HMRC has an internal working group looking at child benefit communications. It updated the child benefit form after the damning findings, and added a new flow chart, as you can see below.

But it still only makes a vague reference to filling in the form ‘to protect your state pension’ rather than explicitly warning your payments will be lower if you fail to so. Ideally, it should add this alert in red text so it can’t be missed. 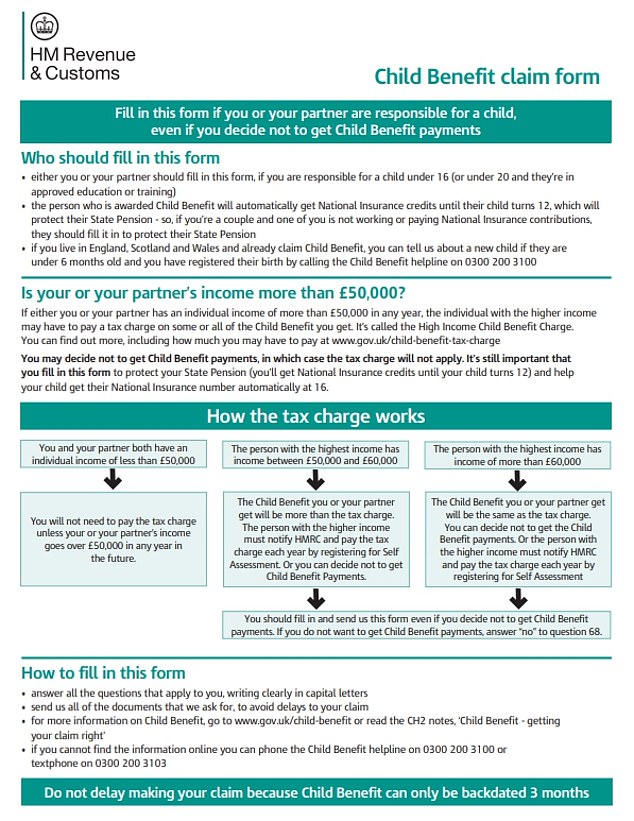 Meanwhile, the Government’s own independent tax officials recently called on it to give state pension credits back to parents who have lost them due to confusion over a system that ‘appears illogical’.

High earners who want to avoid filling in tax returns and paying back child benefit, but who still want the valuable state pension credits, can tick a box on the form that opts them out of receiving the payments but signs them up for credits only.

Regarding your child’s NI number, if you register for child benefit they will automatically have it sent to them when they are 15 years and 9 months, so they can start work on their 16th birthday if they want.

But if they don’t get one, it’s just a matter of calling the Department of Work and Pensions which can sort it out.

Who should fill in the child benefit form?

It’s important a parent who is not working completes the form. The claimant gets the valuable credits towards the state pension, but these are worthless to someone employed and already paying enough National Insurance.

More than 200,000 families are believed to have made this mistake, and it can involve a lot of hassle to put it right.

More recently, HMRC has said that parents in this situation can disregard official time restrictions on applications to correct the record, provided they make a strong enough case.

One couple successfully used this loophole to win state pension credits worth tens of thousands of pounds, by arguing they were unaware his filling in the form could result in her losing huge sums in state pension in old age.