Philps Pasties in Hayle, Cornwall, was set up in 1958 with a loan from the Lloyds Bank 100 yards down the road.

The pasty business thrived and it now has seven branches across the county, including two in Hayle.

But Lloyds is set to pull the plug on its historic connection with the bakery — and the town – after it announced it will be closing its branch in May.

Abandoned: The seaside town of Hayle in Cornwall, will be left without a bank in May after Lloyds shut’s their branch

It will leave Hayle, whose population swells to 50,000 in the summer, without a bank. Five years ago, it had four.

‘It will affect us in a big way,’ says Paul Philps, 64, whose father Sammy founded the bakery. ‘Lloyds is trying to save money, but there is a balance to be struck for the community.’

Bank branches are shutting at a rate of 55 a month across the UK, placing holiday hotspots such as Hayle under strain.

Shopkeepers fear tourists will go elsewhere, while the elderly face arduous journeys to get to a bank.

Neighbouring St Ives, which has been named one of the UK’s best seaside resorts, has lost seven branches since 2015, according to Which?

Rumours abound that the last bank in that town, Barclays, will be next.

Barclays has shut at least 482 UK branches over the past five years, with the real total likely to be higher because the bank will not give figures.

Lloyds has closed 441 UK branches in that time.

The astonishing vanishing act has today prompted warnings that millions of people could be left behind if the UK becomes cashless within a decade, as predicted.

For Hayle, the timing couldn’t be worse. The town is second only to Newquay for the number of holiday beds in Cornwall. This is thanks largely to Towans beach, which stretches 5km across St Ives Bay. 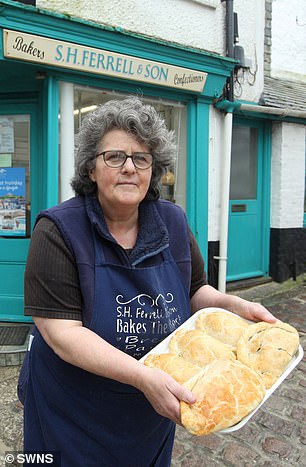 In January, work finally began on a £250 million redevelopment of its North Quay. The first phase will build around 140 properties with views over the estuary, while it’s hoped 20 new retail units will drive a boom in trade.

But unlike Sammy Philps, businesses won’t be able to set up shop with the help of a local bank branch.

‘We’ve been waiting decades for Hayle to regenerate,’ says resident Charlie Cartwright, 56. ‘It seems to be entirely the wrong time for the bank to be closing.’

Hayle shopkeepers say they have seen increased footfall since Lloyds closed its branch in St Ives in 2017, with residents making the 15-minute bus ride to Hayle to do their banking instead.

But Lloyds claims its counters are 21 per cent quieter than the same time last year, prompting its decision to close the branch.

A spokesman adds: ‘We are sorry for the inconvenience this may cause, and encourage customers to contact us so we can discuss the ways we can support them.’

The announcement sparked an ill-tempered town meeting earlier this month. Councillors took turns to denounce the move as ‘ridiculous’ and ‘a classic case of rank profiteering’.

Concerns were raised that the town’s two Post Offices would be unable to cope with demand.

Michael Watton, 36, who runs Duckies Cafe, compares the closures to the Beeching cuts, which axed a third of UK railway lines in the 1960s.

He says most cafes in Hayle, including his own, are cash only, but the closure of Lloyds may force them to start accepting cards, which incurs a fee.

‘I know we’re talking small percentages, but we’re a small business,’ he adds. ‘It will make a massive difference to us.’

Hayle has a large proportion of elderly and vulnerable adults. Many say they switched their accounts to Lloyds because they were told the branch would never close.

Colin Roberts, 37, has learning difficulties and relies on cashiers recognising him in the branch and giving him his money, because he is unable to use a card.

Getting to the next nearest branches requires a 40-minute round trip to Camborne or Penzance, but Colin cannot get there unaided.

Support worker Elle Lowe-Houghton, 35, says the closure will make his finances ‘inaccessible’, adding: ‘For adults with learning disabilities these local amenities are vital. This closure is putting vulnerable people into a corner.’ 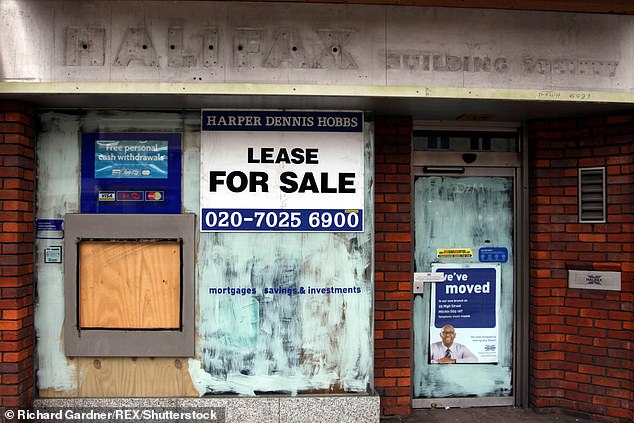 A review panel, set up by ATM network Link, says bank closures are partly to blame for more retailers going cashless, as it has made it difficult for businesses to deposit takings

It comes as experts today warn the UK’s cash system will collapse without legislation to protect it. A year ago, the Access To Cash Review said the UK could become ‘virtually cashless’ by 2035.

But data from UK Finance has since shown that cash use has fallen faster than expected — making up less than 30 per cent of transactions — and the trade body now expects the UK to hit this point by 2030.

The review panel, set up by ATM network Link, says bank closures are partly to blame for more retailers going cashless, as it has made it difficult for businesses to deposit takings.

It also points out that Barclays only reversed plans to stop customers accessing cash at the Post Office following pressure from campaigners and Money Mail.

Meanwhile, 13 per cent of free cash machines have closed over the past year, saving banks around £120 million, according to Which?

Panel chair Natalie Ceeney says: ‘The UK is fast becoming a cashless society — without knowing what this really means for consumers or for the UK economy.

Many people may want a completely digital future, but we need to make sure that this shift doesn’t leave millions behind or put our economy at risk.’

No wonder the people of St Ives fear that they will be abandoned, too.

A NatWest, an HSBC and a Lloyds used to be within a stone’s throw of the High Street, but all have shut within the past five years.

Phyllis Bennett, 87, Joyce Williams, 86, and Doreen Barber, 86, have lived in St Ives since they were born.

Phyllis has to travel 40 minutes to Penzance for her nearest NatWest bank, while Joyce will soon have to do likewise when Lloyds closes in Hayle.

Only Doreen, a Barclays customer, still has access to her local branch. ‘We’ve been abandoned by banks,’ she says.

Alongside the seven branch closures since 2015, St Ives has also lost ten free-to-use ATMs since 2018.

The remaining two Post Offices and three ATMs are spread across the town. Barclays is open only three days a week, rising to four during the summer holidays, when the town’s population grows from 12,000 to around 27,000.

But the bank stocks only £50 notes at this time to meet demand, which is a nightmare for the town’s small businesses. ‘It means you need £46 change for every customer who just wants coffee and cake,’ says Graeme Parkhill, 46, of Scoff Troff Cafe. ‘It’s just not viable.’

Instead she directs tourists to change their money at the Post Office next door, but that regularly has queues of up to half an hour.

On Bank Holiday weekends, the cash simply runs out.

A Barclays spokesman says its St Ives branch has been ring-fenced until at least October 2021 as part of its commitment to more than 100 ‘last-in-town’ and remote branches. But locals fear the reduction in Barclays’s services means closure is inevitable.