The stand-in boss of HSBC has announced plans to axe 35,000 jobs as he stepped up his bid to become chief executive.

Noel Quinn, who became interim chief in August after John Flint was ousted, outlined a sweeping shake-up of the bank designed to save £3.5billion by 2022.

The cost-cutting drive, which Quinn hailed as ‘one of the deepest restructuring and simplification programmes in our history’, will involve up to 35,000 job cuts across HSBC as it slashes staff numbers to around 200,000.

Falling profits: The stand-in boss of HSBC has announced plans to axe 35,000 jobs as he stepped up his bid to become chief executive

Under Quinn’s masterplan, the lender will slim down its investment banking arm, Global Banking and Markets, much of which is based in London.

It will pull money out of these less profitable areas and pour it into faster-growing businesses, such as private banking for wealthy clients.

And it will halve its branch network on the east coast of the US, while gradually expanding its west coast operations targeting the region’s Asian and international communities.

The overhaul is expected to cost £5.5billion, and nervous investors sent shares down 6.6 per cent yesterday, wiping £7.9billion off HSBC’s market value.

The bank, which makes more than half of its income in Asia, said it would continue to focus on China – despite conceding that the outbreak of coronavirus would hurt its performance in the first quarter of this year.

Neil Wilson, at Markets, said: ‘This is as far-reaching an overhaul as you could have imagined, and one that’s essentially seeing it walk away from investment banking in the US and Europe. This is a pivot to Asia on a grand scale.’

HSBC has around 41,000 staff in the UK, and its finance boss Ewen Stevenson said job cuts here would be ‘meaningful’.

Around 10,000 are employed at its Canary Wharf headquarters, which worried staff had nicknamed the ‘Tower of Doom’ in the run-up to the restructuring, and 2,000 are in its UK retail bank head office in Birmingham.

But despite pushing ahead with the ambitious plan, HSBC still gave no hint as to whether Quinn would be kept on as a permanent chief executive. 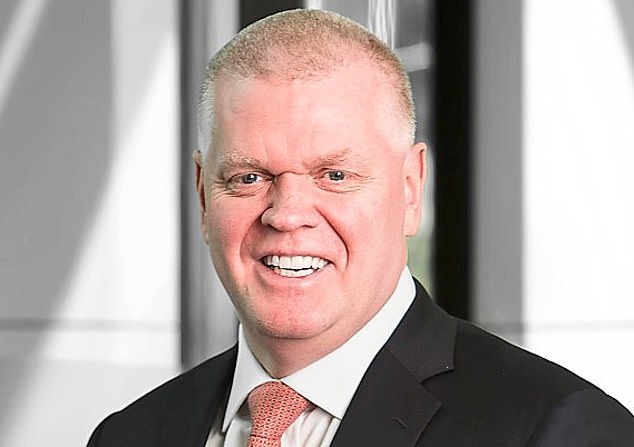 Noel Quinn, who became HSBC’s  interim chief in August after John Flint was ousted, outlined a sweeping shake-up of the bank designed to save £3.5bn by 2022

The bank’s chairman, Mark Tucker, said: ‘The board has embarked on a very thorough process to search for and identify a chief executive.

‘That process is well under way and it is the board’s intention to announce the outcome within a six to 12 month timescale.’

Most investors had been expecting Quinn to be confirmed as boss when the bank unveiled its 2019 results yesterday.

Russ Mould, investment director at funds supermarket AJ Bell, said: ‘It seems perverse that the business currently has an interim chief executive in charge, in Noel Quinn, just when it is launching a major restructuring.’

But analysts reckoned that Birmingham-born Quinn, 59, had come too far to be replaced now.

John Cronin, at broker Goodbody, said: ‘We are staggered that the board has not moved to officially appoint Noel Quinn to the CEO position and we think it can only be a matter of time.

‘We suspect the board was hedging its bets, seeking to observe the market reaction before making the call.’

Reactions to Quinn’s plans were mixed. Cronin said the new strategy was detailed and ‘strong’, while Joseph Dickerson at Jefferies described it as ‘ambitious and very credible’.

But Shore Capital’s Gary Greenwood called it ‘disappointing’, noting that the shake-up left no cash spare that could be returned to shareholders.

Fahed Kunwar, an analyst at research firm Redburn, said: ‘The market expected a bank with higher profitability or increased capital returns. It got neither.’

The damage to HSBC’s profit last year was largely due to it writing down the value of its investment bank and European commercial banking operations by a combined £5.5billion, as it predicted lower long-term economic growth.